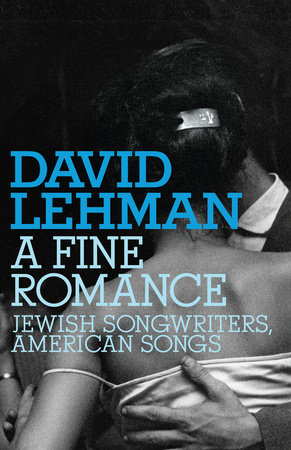 In A FINE ROMANCE, David Lehman looks at the formation of the American songbook-the timeless numbers that became jazz standards, iconic love songs, and sound tracks to famous movies-and explores the extraordinary fact that this songbook was written almost exclusively by Jews.

"Lehman’s central theme is that while the success of great popular composers and songwriters—Irving Berlin, George and Ira Gershwin, Harold Arlen, Jerome Kern, Richard Rodgers, Lorenz Hart, Oscar Hammerstein II—owes much to their Jewish cultural heritage, the songs they wrote often served as a way to escape “their Jewish origins and join the American adventure.” (Philip Roth writes about this exact idea in several novels, perhaps most movingly in “American Pastoral,” and most histrionically in “The Plot Against America.”) Lehman’s foremost example of what he calls this paradox (Richard Rodgers actually attended Camp Paradox as a child), is Irving Berlin (born Israel Baline) who in writing such songs as “God Bless America” and “White Christmas,” was preaching a new religion, that of America itself. Yet Lehman is both proud and protective of his own connection to these great songwriters, going as far as to cast himself as a fictional nephew to Uncle Jerry (Kern) and Uncle Harry (Arlen). And he offers a clever turn on a famous line from “West Side Story” (Bernstein/Sondheim), noting that, “When you’re a Jew, you’re a Jew all the way.” His most intriguing argument is that even the songs by non-Jews of the era, “are in some fundamental way inflected with Judaism.” Lehman’s thrust is a cleaned-up riff on the classic Lenny Bruce Jewish/goyish bit: “If you live in New York or any other big city, you are Jewish … Negroes are all Jews. Italians are all Jews. Irishmen who have rejected their religion are Jews.” The connection between Jews, blacks, and goys is not inconsequential: it forms one of the central components of music from the standards era, perhaps best exemplified by Frank Sinatra singing “Ol’ Man River,” or as Lehman puts it, “the lean Italian dressed in white singing a song by Jews about the plight of blacks.” (It’s worth noting, also, that Lenny Bruce made an appearance last night, in the person of Steve Cuiffo, doing a version of the above bit. A crazy show!) While navigating these elaborate and often fraught ideas, Lehman consistently applies a light touch, perfect for a book about songs with lyrics such as: “The eyes, the arms, the mouth of you,/ The east, west, north, and south of you.” That one’s from “All of You,” by Cole Porter, a Midwestern WASP who went to Yale, yet who wrote lyrics that fit squarely into what Lehman understands as a tradition that “followed a Jewish imperative in their abundant humor, wit, and cleverness and in their ability to mix sadness and elation and to produce thereby the mysterious tingle of romance.” Porter was all about romance, and his songs “Let’s Do It,” “Let’s Misbehave,” and “You’re the Top,” can make even the most hardened stoic grin like a fool. If you’re not convinced, check out Bobby Short’s debonair version of “You’re the Top,” which includes such improbable rhymes as: “You’re a rose,/ You’re Inferno’s Dante,/ You’re the nose / On the great Durante.” For all the fun of the pop song, however, there is an underlying sadness throughout the book. “An ode to the great songwriters is bound to turn elegiac,” Lehman writes. He includes a chronology at the end of the book that starts at 1,000 b.c., with King David (“a musician”) ruling over the Kingdom of Israel, and ends with Bob Dylan performing an electric set at the Newport Film Festival in 1965. (Interestingly, last night’s bassist was Tony Garnier, a longtime member of Dylan’s current touring band.) Lehman likes Dylan, and even links him to Harold Arlen and the other Jewish songwriters of an earlier era. But Dylan heralded, in many ways, the death of the popular standard. He—along with the Beatles and the Rolling Stones—made the guitar king, and eliminated the composer/lyricist dynamic by doing it all himself. Additionally, folk and rock music communicated the anger and confusion of the time, rather than scoring points with cheeky internal rhymes and charming pathos. “The new music devalued cleverness and irony, not to mention the clarinet and the trombone,” Lehman writes. The standards celebrated the American “good life,” something that in the nineteen-sixties suddenly seemed bourgeois, old-fashioned, or narrow. An example: As the boys in the Barry Levinson movie “Diner,” (set in 1959) argued about who was better—Sinatra or Johnny Mathis—Mickey Rourke, the beautiful young Mickey Rourke, ended the discussion, and the era, by naming “Presley,” as in Elvis, as his choice instead. That movie’s great opening scene at the dance hall now looks like a museum piece. The gentle notion of “romance” had turned to camp. Dancing was finished, and for those who have lamented the last fifty years of pop music, so was sophistication and style." — Ian Crouch, The New Yorker  (Read the full review)

"As part of the publisher's ongoing Jewish Encounters series, Lehman, poet, anthologist (The Oxford Book of American Poetry) and critic (The Last Avant-Garde), melds dreamy personal reflections with impressive archival excavation for a thorough look at the popular early-20th-century songwriters and what made their work quintessentially Jewish. Delving into the iconic hits of Irving Berlin, Jerome Kern, the Gershwins, Harold Arlen, Larry Hart, Richard Rodgers and Oscar Hammerstein, among selective others, Lehman ponders how these Ashkenazi Jews, mostly raised speaking Yiddish in New York as cantors' sons, melded their particular wit, melancholy and sophistication with the rhythmic richness of African-American music—a blending of blues and jazz. In their many beloved seminal hits—e.g., Berlin's ‘Alexander's Ragtime Band’ (1911), George Gershwin's ‘Rhapsody in Blue’ (1923), Rodgers and Hammerstein's ‘Oh, What a Beautiful Morning' (1943)—these sons (Dorothy Fields being the female lyricist exception) of refugees from anti-Semitic rumblings in Europe ‘were conducting a passionate romance with America,’ Lehman maintains. The author himself grew up in the Inwood section of New York City, under the warm spell of these songs; by the time he graduated from Stuyvesant High School and attended Columbia, where many of these songwriters had met, rock and roll was supplanting that old-time magic. Digressive, nostalgic and deeply moving, Lehman achieves a fine, lasting tribute to the American songbook." — Publishers Weekly

"Lehman looks at that amazing generation of songwriters who collectively turned out what we know as the 'American Song Book.' American, yes, but what gave their creations a Jewish identity?... Lehman is passionate about what is commonly called the 'American Song Book.' The term refers to all those popular songs from the 1920s up through the 1960s, many of them written originally for the stage, that people in America and around the world continue to hum - the 'standards.' Both the melodies and the lyrics comprise the soundtrack of the lives of millions, including Lehman, who integrates snatches of quotes from many into the text of his book, which only makes the reading that much more enjoyable…. Lehman paints a vivid picture of the times." — Michael Handelzalts, Ha’aretz (Israel)

"What accounts for the fact that the majority of America's leading songwriters, the movers and shapers of our popular musical culture, were Jewish, including such luminaries as Jerome Kern, Irving Berlin, George Gershwin, Richard Rodgers, Harold Arlen, Frank Loesser, Leonard Bernstein, and Stephen Sondheim? Through fact-based analysis and anecdote-rich tribute, David Lehman spiritedly explores this striking phenomenon." — Jewish Book World

"This volume is part of the well-received and well-written Jewish Encounter series, which intends and succeeds in promoting Jewish literature, history, culture and ideas. All the books in the series are very good, but this volume has the most substance of those that I've read, and it is filled with interesting examples. David Lehman is the editor of The Oxford Book of American Poetry and The Best American Poetry, among other books, and knows the subject he is writing about. Lehman helps us hear and understand the mysterious ingredients of jazziness and bluesness, the wail, the wine and exultant notes that permeate the songs written by Jewish song writers. Many of the words in the purely American songs of are Jewish origin and many of the melodies recalls what is heard in the synagogue. The book's title reflects the mixture of joy and sadness in the songs, but also the romance of their writers with America…. Lehman is a superb writer. Readers will enjoy his language." — Israel Drazin, The Jewish Eye

"In A FINE ROMANCE: JEWISH SONGWRITERS, AMERICAN SONGS—part history, part memoir, part essay, part musical analysis—author David Lehman finds the deeper meaning in the intersection of this quintessential American art form with Jewish culture just one step removed from the Eastern European shtetl. Lehman describes how both the form and content of so many classic pop standards only subtly masked their Jewish origins. In Gershwin’s 'Swanee' Lehman hears the melody of the Sabbath prayer, 'Hashkivenu.' In Frank Loesser’s lyrics for 'How to Succeed in Business Without Really Trying,' he sees a direct transcription of Yiddish grammar ('company policy is by me okay'). In the overall theme of Rodgers and Hammerstein’s 'Oklahoma,' he finds a metaphor for American nationalism and idealism at the very moment when the ovens of Auschwitz were burning the remains of millions of European Jews. Lehman is a wonderful storyteller, packing his text with historical and personal anecdotes about the songwriters as well as the mostly non-Jewish performers who brought these works to the general public, singers like Fred Astaire, Ella Fitzgerald, Frank Sinatra, Peggy Lee, and others. Lehman perceptively analyzes the give-and-take between Jewish songwriters and African-American jazz, and how the two groups together, consciously or otherwise, created a quintessentially American art form that presented a musical mirror to the predominantly white Christian American society of the time while it spread a new kind of musical gospel of America to the world beyond the borders of the United States. In so doing, Lehman shows, blacks and Jews came to define America for Americans and the world." — Seth Rogovoy, Berkshire Jewish Voice

"This compact book is a lucid personal response to a thick and complicated subject; how and why so many standards from the Great American Songbook came from the minds, hearts and pens of Jewish songwriters, from the Gershwins, Jerome Kern and Irving Berlin to Rodgers, Hart and Hammerstein, Frank Loesser, Harold Arlen, and on through Sondheim and Bernstein to Carole King, Bob Dylan and Randy Newman. It’s part researched history, part clarifying criticism, and at times it becomes a phantasmagoria dreamscape in which the author—a poet and storied poetry editor— imagines all of the above are his relatives. Lehman identifies often-bluesy aspects of Jewish liturgical music that influenced these songwriters’ sounds, tendencies toward undercutting the glad with the sad (and vice versa) in their tone, and towards playfulness, irony, romance and gall in their lyrics, as elements shared by these children of immigrants 'who wanted to re-create themselves as Americans and wound up recreating American culture in the process.' The book also sheds light on the nature and strength of our culture’s response to that shared sensibility." — American Songwriter