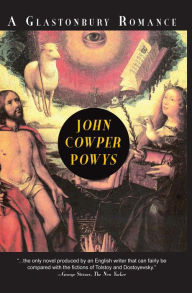 "A truly extraordinary novel. It stands out indeed in a most astonishing way from the great mass of present-day fiction: a very earthquake of a book, bewildering, if you like, shocking, even infuriating, yet incontestably great.... It is a big book, an important book; possibly the most important book that we have had for some time, or are likely to have in the near future."—The Times (London)

"The only novel produced by an English writer that can fairly be compared with the fictions of Tolstoy and Dostoevsky...with an immensity to which only Blake could provide any parallel in English literature. Go out and acquire A Glastonbury Romance...almost every thing else on your bookshelf will start looking thin."—George Steiner, The New Yorker

“Powys is a writer of extraordinarily imaginative powers, who combines magic and myth with realism to produce a strange kind of clairvoyance.  His masterpiece is A Glastonbury Romance, one of the most remarkable and original novels of the century.  One has the feeling that Powys has re-thought out for himself the whole meaning of life; his use of the Grail myth in a modern context, his highly individual style, both grand and colloquial, and the core of mysticism, together give us a quite new rendering of experience yet one that is related to many of the ‘archetypal’ notions of man.”—David Daiches, The Present Age in British Literature

"John Cowper Powys is a powerful genius, whose novels stir us deeply. A Glastonbury Romance is his masterpiece."—Annie Dillard

“One of the most significant and notable books of the century.”—C. S. Forester

“Perhaps the greatest literary work of our generation.”—G. Wilson Knight

“I believe that A Glastonbury Romance is one of the greatest novels in the world, to be classed with Tolstoy’s War and Peace.”—J.D. Beresford

“I commend A Glastonbury Romance to those readers who are able to recognize genius that is not yet mentioned in textbooks.  Mr. Powys, I believe, is one of the last survivors in the mainstream of the English novel’s vanishing greatness.”—George D. Painter

“Really a tremendous book.  It makes the competent little novels that week by week are hailed as ‘masterpieces’ look silly.  In searching for comparison, one finds oneself using such names as Hardy…. In breadth, rhythm and intensity A Glastonbury Romance has something of the mighty pantheism of Rubens.”—Sir Gerald Barry

"[A] great novel. It stands as a rebuke to minimum-risk writers and readers, and I hope that many among them will be encouraged to attempt it."—Chicago Tribune

“This is a notable English literary event.”—Angus Wilson, Observer

“[Powys] is still ‘the master’ to me.  His words, even today, have the power of bewitching me.”—Henry Miller

“Possibly the greatest novel of the twentieth century, and one of the great mystical masterpieces of all time.”—Colin Wilson

“Thousands of baby boom readers who grew up with Tolkien now want to spend their adulthood with the chronicles of Powys.”—The Independent