A Nation of Moochers

America’s Addiction to Getting Something for Nothing 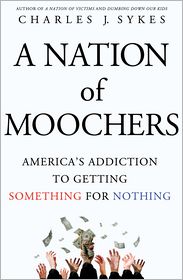 Have we reached a tipping point where more Americans depend on the efforts of others than on their own? Are we becoming a nation of moochers?

In A Nation of Moochers, Charles J. Sykes argues that we are already very close to that point, if we have not already crossed the line: from the corporate bailouts on Wall Street, to enormous pension, healthcare, and other entitlement costs, to questionable tax exemptions for businesses and individuals, to the alarming increases in personal default and dependency, the new moocher culture cuts across lines of class, race, and private and public sectors.

A Nation of Moochers explores the shift in the American character as well as the economy. Much of the anger of the current political climate stems from the realization by millions of Americans that they are being forced to pay for the greed-driven problems of other people and corporations; increasingly, those who plan and behave sensibly are being asked to bail out the profligate. Sykes’ argument is not against compassion or legitimate charity, but distinguishes between definable needs and the moocher culture, in which self-reliance and personal responsibility have given way to mass grasping after entitlements, tax breaks, benefits, bailouts, and other forms of feeding at the public trough.  A Nation of Moochers is a rallying cry for Americans who are tired of playing by the rules and paying for those who don’t.

"Sykes argues that hardworking, tax-paying Americans are being turned into the nation’s piggy bank by freeloading ‘moochers,’ both individual and corporate, who have given in to a culture of dependence and free lunch. He lays all this squarely at the feet of ‘elite’ liberals, whose ‘Assumption of Incompetence’—the default position of assuming that most Americans are incapable and thus must be cared for—has cultivated an atmosphere where people are no longer required to fend for themselves. He points to Katrina victims misusing benefits, homeowners who walk away from underwater mortgages, unemployment benefits fraudsters, adult children living with their parents, big businesses accepting bailouts, and, somewhat less persuasively, food stamps and free school lunches. Though he doesn’t make an especially strong case that ‘Obamacare’ is to blame, his argument is sobering: we’ve set up a system in which dependency begins at birth and extends through people’s entire lives, which has brought us to a tipping point in which more Americans are relying on the efforts of others rather than their own. Interestingly, his cure is less systemic than social: he suggests ‘dismantling Moocher Nation’ by restoring some of the stigma of accepting a handout…. His call for a return to personal responsibility is on point and persuasive." — Publishers Weekly