Iran and the War Against the West 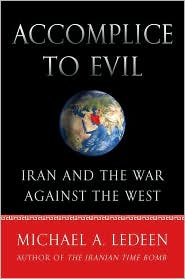 "Mr. Ledeen has written prolifically and spoken eloquently on political extremism, terrorism and America's role in the world. He accurately predicted the theft of this past summer's Iranian elections and was denounced on the front page of Tehran's leading government-run daily newspaper; in this country, he has been attacked routinely by liberal accommodationists. But whatever the grounds for attack, there should be no question of his profound patriotism and sense of duty." — John R. Coyne, Jr., The Washington Times