The Ambiguity of Greatness 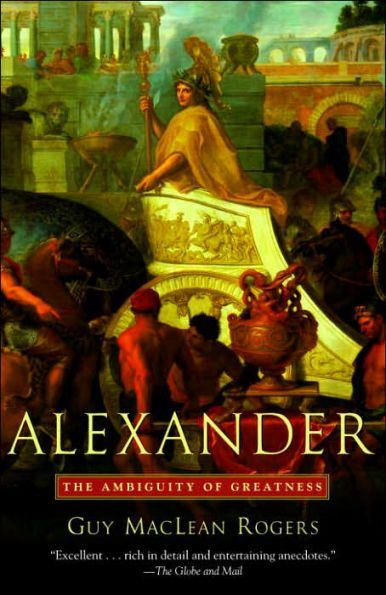 For nearly two and a half millennia, Alexander the Great has loomed over history as a legend–and an enigma. Wounded repeatedly but always triumphant in battle, he conquered most of the known world, only to die mysteriously at the age of thirty-two. In his day he was revered as a god; in our day he has been reviled as a mass murderer, a tyrant as brutal as Stalin or Hitler.

Who was the man behind the mask of power? Why did Alexander embark on an unprecedented program of global domination? What accounted for his astonishing success on the battlefield? In this luminous new biography, the esteemed classical scholar and historian Guy MacLean Rogers sifts through thousands of years of history and myth to uncover the truth about this complex, ambiguous genius.

Ascending to the throne of Macedonia after the assassination of his father, King Philip II, Alexander discovered while barely out of his teens that he had an extraordinary talent and a boundless appetite for military conquest. A virtuoso of violence, he was gifted with an uncanny ability to visualize how a battle would unfold, coupled with devastating decisiveness in the field. Granicus, Issos, Gaugamela, Hydaspes–as the victories mounted, Alexander’s passion for conquest expanded from cities to countries to continents. When Persia, the greatest empire of his day, fell before him, he marched at once on India, intending to add it to his holdings.

As Rogers shows, Alexander’s military prowess only heightened his exuberant sexuality. Though his taste for multiple partners, both male and female, was tolerated, Alexander’s relatively enlightened treatment of women was nothing short of revolutionary. He outlawed rape, he placed intelligent women in positions of authority, and he chose his wives from among the peoples he conquered. Indeed, as Rogers argues, Alexander’s fascination with Persian culture, customs, and sexual practices may have led to his downfall, perhaps even to his death.

Alexander emerges as a charismatic and surprisingly modern figure–neither a messiah nor a genocidal butcher but one of the most imaginative and daring military tacticians of all time. Balanced and authoritative, this brilliant portrait brings Alexander to life as a man, without diminishing the power of the legend.

A selection of the History Book Club

"This thorough and deeply researched book is very welcome. Guy Rogers gives us, too, the astonishing and highly important relevance, to our whole history, including recent times, of this almost incredible career. Read it and think!" — Robert Conquest, Senior Fellow at the Hoover Institution and author of The Great Terror

"Rogers's Alexander is a learned and judicious essay about a man who became a myth in his lifetime and remains partly mythical today in spite of the best efforts of generations of scholars to interpret and reinterpret surviving ancient texts about him. Certainty on many points will never be possible; but reading what Rogers has to say about how Alexander changed the world around him and how his deeds still echo among us is a delightful exercise. Alexander modeled himself on Homer's heroes and actually joined their company as no one else ever managed to do." — William H. McNeill, Professor Emeritus in History, University of Chicago, and author of The Rise of the West

"An engaging and inviting read.... [An] enlightening book." — Houston Chronicle