Reflections on the Promise and Failure of the 1960s 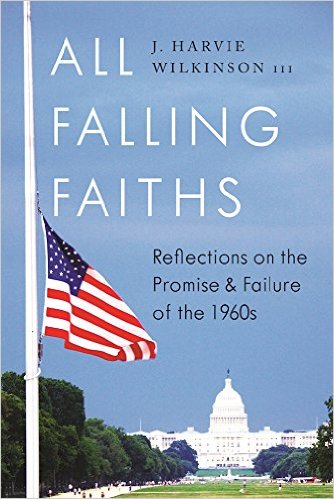 In this warm and intimate memoir, Judge Wilkinson delivers a chilling message. The 1960s inflicted enormous damage on our country; even at this very hour we see the decade’s imprint in so much of what we say and do. The chapters reveal the harm done to the true meaning of education, to our capacity for lasting personal commitments, to our respect for the rule of law, to our sense of rootedness and home, to our desire for service, to our capacity for national unity, to our need for the sustenance of faith. Judge Wilkinson does not seek to lecture but to share in the most personal sense what life was like in the 1960s, and to describe the influence of those frighteningly eventful years upon the present day.

Judge Wilkinson acknowledges the good things accomplished by the Sixties and nourishes the belief that we can learn from that decade ways to build a better future. But he asks his own generation to recognize its youthful mistakes and pleads with future generations not to repeat them. The author’s voice is one of love and hope for America. But our national prospects depend on facing honestly the full magnitude of all we lost during one momentous decade and of all we must now recover.

"J. Harvie Wilkinson has written an elegant, deeply felt essay/memoir about America in the 1960s." — Terry Eastland, The Weekly Standard

"To regular readers of "Above the Law," Judge J. Harvie Wilkinson III needs no introduction. A judge on the U.S. Court of Appeals for the Fourth Circuit since 1984, Judge Wilkinson is one of the most distinguished and highly respected members of the federal judiciary….. Judge Wilkinson is also a gifted prose stylist…. I recently had the pleasure of reading his latest work, All Falling Faiths: Reflections on the Promise and Failure of the 1960s,and I can’t recommend it enough. It’s a deeply insightful, heartfelt, and superbly written book, in which Judge Wilkinson reflects on living through the ’60s and draws important lessons from those years — lessons that are sadly all too relevant today." — David Lat, Above the Law  (Read the full review)

"In his 72 years, Judge J. Harvie Wilkinson III of the U.S. Court of Appeals for the Fourth Circuit, who was raised in segregated Richmond, Virginia, acknowledges that he has seen much change, often for the better, including advances in the 1960s. But in his elegant new memoir, All Falling Faiths: Reflections on the Promise and Failure of the 1960s, he explains why today’s distemper was incubated in that ‘burnt and ravaged forest of a decade.’… He locates the genesis of today’s politics of reciprocal resentments in ‘the contempt with which the young elites of the Sixties dismissed the contributions of America’s working classes.’ We have reached a point where ‘sub-cultures begin to predominate and the power of our unifying symbols fades. We become others to ourselves.’ The ‘insistent presentism’ that became a permanent mentality in the 1960s cripples our ability to contemplate where we came from or can go. ‘Sometimes individuals lose, and societies gain,’ Wilkinson writes. ‘Maybe someone’s loss of privilege is another’s gain in dignity. Perhaps there is a selfishness in every song of lament.’ At this moment of pandemic vulgarity and childishness, his elegiac memoir is a precious reminder of what an adult voice sounds like." — George F. Will, The Washington Post  (Read the full review)

"Were the 1960s one of the ‘greatest’ decades ever or a decade that inflicted more harm than any other in modern times? That is the question that J. Harvie Wilkinson III, a federal appeals-court judge in Virginia, addresses in his elegiac memoir, All Falling Faiths…. He writes eloquently and persuasively about the impact of the 1960s, arguing that the pervasive anger of today’s politics can be traced to ‘that burnt and ravaged forest of a decade.’" — Lee Edwards, The Wall Street Journal

"These are the notions of destruction that fueled the 1960s, cogently captured in J. Harvie Wilkinson’s moving memoir, All Falling Faiths. In that decade, when the author was at Yale, the university became ‘an intellectual inferno policed for its allegiance to the prevailing alienation.’ Mr. Wilkinson, a justice on the U.S. Court of Appeals for the 4th Circuit in Richmond, reflects on how concern to right history’s wrongs led to the inability ‘to tell the good side of the American story,’ and contributed to the illiteracy in history and an ‘extended exercise in self-flagellation.’" — Suzanne Fields, The Washington Times

"J. Harvie Wilkinson dares to hope that America’s angry, fractured, frequently lawless culture might be an episode rather than an irreversible trend. By tracing our troubles to a specific epoch—the revolutions of the Sixties, when in our confusion we ‘could not accomplish great good without inflicting great harm’—he enlists our past to recover our future. And enlists himself: his memoir of his 1950s Richmond boyhood and 1960s coming-of-age at Lawrenceville, Yale, and the U.S. Army is at once loving and unsparing. Indeed, All Falling Faiths falls squarely in the Southern literary tradition. Deeply observed and poetic, liberal and grounded, aware of the ‘abiding constraints’ of the human condition, Judge Wilkinson’s book is itself a splendid guide to a reconstituted American culture." — Christopher DeMuth, Distinguished Fellow at the Hudson Institute and former President, American Enterprise Institute

"Beautifully written and persuasively argued, All Falling Faiths is a compelling indictment of trends generated in the 1960s. At the time, the decade was seen as tragic mainly because of the deaths of the Kennedys and Martin Luther King and the slaughter in Vietnam. In retrospect, J. Harvie Wilkinson suggests that these and other calamities contributed to a broader unraveling of American institutions of faith, family and, in many ways, freedom itself. Whether you agree or disagree with the thesis, this book will challenge you to reconsider many things you thought you knew about one of the most influential decades in US history." — Prof. Larry Sabato, Director, University of Virginia Center for Politics

"J. Harvie Wilkinson has written a bittersweet memoir of how the volcanic years of the 1960s divided America. In Mr. Wilkinson's eminently fair telling of this saga, all responsible parties get what they deserve." — Daniel Henninger, Deputy Editor, The Wall Street Journal