How Imperial Academia Dismantled Our Culture (and Ushered In the Obamacrats) 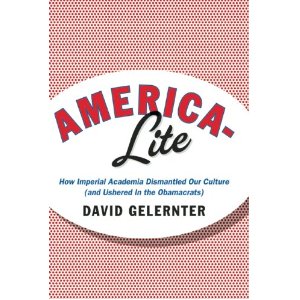 America-Lite (where we all live) is just like America, only turned into an amusement park or a video game or a supersized Pinkberry, where the past and future are blank and there is only a big NOW. How did we come to expect no virtue and so much cynicism from our culture, our leaders—and each other? In this refreshingly judgmental book, David Gelernter connects the historical dots to reveal a stealth revolution carried out by post-religious globalist intellectuals who, by and large, “can’t run their own universities or scholarly fields, but are very sure they can run you.” These imperial academics have deployed their students into the top echelon of professions once monopolized by staid and steady WASPs. In this simple way, they have installed themselves as the new designated drivers of American culture. Imperial academics live in a world of theory; they preach disdain for mere facts and for old-fashioned fact-based judgments like true or false. Schoolchildren are routinely taught theories about history instead of actual history—they learn, for example, that all nations are equally nice except for America, which is nearly always nasty.

With academic experts to do our thinking for us, we’ve politely shut up and let second-raters take the wheel. In fact, we have handed the keys to the star pupil and teacher’s pet of the post-religious globalist intellectuals, whose election to the presidency of the United States constituted the ultimate global group hug. How do we finally face the truth and get back into the driver’s seat? America-Lite ends with a one-point plan.

"AMERICA-LITE is lean, incisive, convincing, delightfully indelicate, and, in a break from the conventions of the literature on education, honest. It is a fine dissection—de-construction, if you must—of the corruption of higher education and the resulting debasement of political culture. If it makes its way on to a single college reading list, Hell will have frozen over." — Stephen Daisley, Commentary Magazine