The Precedents and Principles We Live By 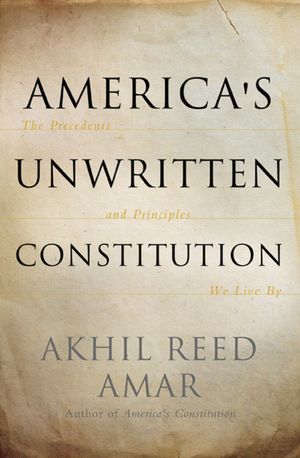 In this sequel to America's Constitution: A Biography, renowned constitutional scholar Akhil Amar explores the little-understood relationship between the written Constitution and the many factors that shape our interpretations of this foundational document. Despite their venerated place in American history, the U.S. Constitution and its amendments do not enumerate all of the various rules and rights, principles and procedures that guide America's political system.  In America's Unwritten Constitution, Amar demonstrates that in order to properly interpret the Constitution, we have to look beyond it: to precedents set by our founding fathers, to common practices in court doctrine, and to sources like the Federalist Papers and Gettysburg Address—documents, symbols, and standards that together form a comprehensive, adaptable, "unwritten" Constitution. He presents a bold new vision of the American constitutional system, showing how the complementary relationship between the Constitution's written and unwritten components is one of America's greatest and most enduring strengths.

"Amar explains in comprehensive detail the necessity of moving beyond the text of the Constitution to obtain an accurate understanding of America's fundamental law…. This work is both evenhanded and persuasive and destined to become a classic for students of the U.S. Constitution. Summing Up: Essential. All readership levels." — R. Heineman, Choice

"The most striking thing about the book, however, is that it is, in many ways, a tour de force. It is extraordinary both in its scope and in the erudition it displays: it is impossible to do justice, in a review, to the learning reflected in its pages. A book that is so dense in historical detail and textual argument could easily become tedious, but this book does not; every chapter is easy to read but packed with substance. The book can be a little oracular at times, and a little preachy; and I have some qualms both about the big picture it paints and about some of the specific arguments it makes. But this is, without question, a remarkable work of scholarship." — David A. Strauss, Harvard Law Review

"In America’s Unwritten Constitution, Akhil Reed Amar aims high and has produced a masterful, readable book that constitutes one of the best, most creative treatments of the U.S. Constitution in decades.… [The book] is filled with thought-provoking material and fun vignettes, suitable for a wide audience…. Amar’s approach is refreshing…. Amar makes a creative case that America’s written Constitution and its unwritten Constitution, since the beginning of the nation, have fit snugly together to form a single, more perfect union." — Ken Gormley, The Washington Post

"Akhil Reed Amar is a rarity: a progressive law professor who is unafraid of the text of the Constitution…. In his ambitious new book, America’s Unwritten Constitution, he examines the paradox of needing to go beyond the text in order to faithfully follow the text…. His is a ‘holistic’ interpretation, one that rejects reading passages or clauses of the text in isolation from the document as a whole. He is masterfully creative in finding overarching themes that tie the disparate clauses together in novel and sometimes counterintuitive ways…. [A] highly engaging and thought-provoking book." — Randy Barnett, The Wall Street Journal

"[Amar lays] out his argument in case-by-case details that are scholarly and legalistic but always readable…. [An] ingenious mixture of history, legal anecdotes and hypothetical cases." — Kirkus Reviews

"Deeply researched and carefully argued, this book is nothing less than a sophisticated and comprehensive theory of constitutional jurisprudence that resists being construed along narrow political lines. Indispensable for law students and scholars, this will also be enjoyed by general readers." — Booklist

"The most interesting passages consider influences on the Constitution never anticipated by its framers, such as the women’s rights movement…. Those with previous knowledge of Constitutional law and American politics and history will enjoy it. Undergraduates studying political science will also find it useful. Recommended." — Library Journal

"This book is brilliant, creative, ambitious, comprehensive, imaginative, and thought-provoking. It is a must-read for anyone interested in Constitutional Law." — Steven G. Calabresi, Class of 1940 Research Professor, Northwestern University School of Law; Co-Founder of the Federalist Society

"This is an engrossing, epic work of enduring importance—not only a treasure trove for scholars of American law, history, and politics, but also an inspiring, empowering guidebook for activists. It compellingly demonstrates how to harness the Constitution’s full meaning in order to promote its thrilling vision of liberty and justice for all. No matter what your prior knowledge of this field, and no matter what your ideological perspective, this magnificent book will enhance your understanding and appreciation of our cherished Constitution. If I had to choose a single work to recommend to either my constitutional law students or my civil libertarian colleagues, this would be it." — Nadine Strossen, Former President, American Civil Liberties Union; Professor, New York Law School

"In America’s Unwritten Constitution, Professor Amar adds to his already masterful bibliography what will instantly become a classic examination of constitutional law. As the Constitution itself stood in need of a seminal biography, so too the vast and varied domain of our Nation’s constitutional law cried out for a guidebook. Professor Amar has now brilliantly provided both." — Ken Starr, President of Baylor University; Solicitor General of the United States, 1989-1993; Independent Counsel, 1994-1999

"Akhil Amar brings the patience of a historian, the ardor of a lover, and (yes, sometimes) the panache of a conjurer to America’s unwritten Constitution. If you want to argue with him, you will have to summon all these qualities yourself. This is a serious and provocative book." — Richard Brookhiser, author of James Madison

"Yale law professor Amar follows his highly regarded historical-textual analysis of America’s Constitution with a companion volume on the history, culture, and legal tenets of the ‘unwritten constitution,’ the traditions and precedents that inform constitutional interpretation. Amar proposes that the unwritten constitution is by necessity on equal grounds with the written one and provides the context for unraveling the many questions the Constitution leaves undetermined. In effect, the unwritten constitution fills the gaps necessary to make the Constitution a working, living document. Among the ‘documents’ Amar cites are the precepts of early English jurisprudence; Supreme Court decisions, including cases that are notorious because they were wrongly decided; and famous speeches, like the Gettysburg Address that presaged the meaning of the equal protection clause of the 14th Amendment. Among the many examples Amar uses to explain the interplay between the written and unwritten Constitution are death penalty jurisprudence, the right to a jury trial, and the establishment clause of the First Amendment. He also examines the constitutionality of special prosecutors, political parties, and filibusters to effectively make his point: the Constitution’s textual limitations and its interpretation require acknowledging the unwritten constitution. Sophisticated readers will be rewarded for traveling with Amar as he covers a great deal of ground." — Publishers Weekly