An Aristocracy of Critics

Luce, Hutchins, Niebuhr, and the Committee That Redefined Freedom of the Press 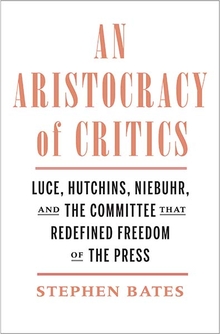 The Commission on Freedom of the Press was one of the greatest collaborations of intellectuals in the twentieth century. Financed by Time Inc. publisher Henry R. Luce, the committee included preeminent philosophers, educators, theologians, and constitutional scholars, with University of Chicago president Robert Maynard Hutchins as chair. Starting in 1943, commission members spent three years wrestling with subjects that are as pertinent as ever: partisan media and distorted news, activists who silence rather than rebut opponents, conspiracy theories spread by faceless groups, hate speech, and the survivability of American democracy in a post-truth age. The report that emerged, “A Free and Responsible Press,” is a classic, but much of the commission’s greatest wisdom never made it into print. In this book, journalist and First Amendment scholar Stephen Bates reveals how these towering intellects debated some of the most vital questions of their time—and reached conclusions urgently relevant today.

Winner of the 2021 Goldsmith Book Prize!
The Goldsmith Book Prize is awarded by the Shorenstein Center on Media, Politics and Public Policy at Harvard University's Kennedy School of Government to a book "that best fulfills the objective of improving democratic governance through an examination of the intersection between the media, politics and public policy."

"A sterling piece of intellectual history of America at mid-century, and an important meditation on the problems of journalism in American life." — Richard Tofel, President of ProPublica

"In decades of editing, I have always carried with me the thoughts of A Free and Responsible Press. Stephen Bates does us a service in his vivid account of its creation." — Sir Harold Evans, Editor of "The Sunday Times" from 1967 to 1981, author of The Freedom of the Press

"Bates skillfully blends biography and intellectual history to provide a sense of how the clash of ideas and the clash of personalities intersected." — Scott Stossel, American Scholar

"In 1944, Henry Luce, the overbearing, self-aggrandizing publisher of Time, Fortune, and Life, enjoined Robert Hutchins, the ‘imperious’ president of the University of Chicago, to lead a Commission on Freedom of the Press. In a fascinating, prodigiously researched intellectual history, media scholar Bates offers a penetrating examination of the commission, which resulted—after 17 meetings, 58 witnesses, 225 staff interviews, and a hefty financial investment—in a controversial report, A Free and Responsible Press. Both maligned and praised when it was published in 1947, the report, Bates writes, illuminates the problems of democracy and the media that continue to vex the U.S. At a time when the public deeply distrusted journalists, Luce directed his commission to investigate newsroom bias, ‘foreign and domestic propaganda, corporate domination of political discourse, a fragmenting and polarized electorate, hate speech, and demagoguery, as well as what we now call echo chambers, trolls, deplatforming, and post- truth politics.’ The commission’s egotistical, opinionated members, writes the author, ‘were not necessarily suited to committee work.’ However, they agreed that the media exerted a powerful force in shaping public opinion, even when experts told them that most people read only what they already believe and only about 20% care about public affairs. Bates fashions shrewd, deft characterizations of individual members: among them, ‘jaunty mystic’ philosopher William Ernest Hocking; pessimistic theologian Reinhold Niebuhr; long-winded propaganda expert Harold Laswell; outspoken poet Archibald MacLeish. On the whole, the commission embraced ‘the democratic hypothesis’ that ‘if people have access to the facts and arguments, they will govern themselves more wisely than anyone can govern them.’ But they mounted no evidence, preferring instead ‘to meander in vague philosophical generalities rather than do the dirty hard work of digging for facts.’ Nevertheless, Bates argues persuasively, the report remains influential as a seminal examination of the media. A well-constructed, timely study, clearly relevant to current debates." — Kirkus Reviews (starred review)  (Read the full review)

"A masterful account.... Prodigiously researched and beautifully written, An Aristocracy of Critics is an authoritative and accessible study that situates the Committee on Freedom of the Press in the context of American intellectual history. It brings the commission to life, showing how their vision of the press developed into the shape that it finally took in their report. For this reason, it belongs in courses on media criticism, media ethics, and media history." — John P. Ferré, American Journalism

"Mr. Bates has done an admirable job of trawling through many archives and the commission’s minutes, emerging with sharp pen portraits of the panelists and their earnest but sometimes unintentionally comical deliberations." — Ben Yagoda, The Wall Street Journal  (Read the full review)