An Autumn of War

What America Learned from September 11 and the War on Terrorism 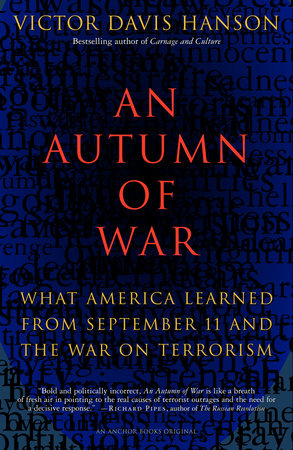 "Victor Hanson is a national treasure. No one has written with such great prescience about the present war or more accurately predicted the course of events, on the fighting front, at home, and around the world. His wisdom arises from a deep knowledge and understanding of history, ancient and modern. His uncanny accuracy in prediction comes from a full and clear grasp of the facts and the application to them of an informed understanding of human nature and the character of war. All this he presents in clear, vigorous and eloquent prose. Every American needs to learn him." — Donald Kagan, author of ON THE ORIGINS OF WAR AND THE PRESERVATION OF PEACE

"Together with John Keegan, [Hanson] is our most interesting historian of war." — Jean Bethke Elshtain, author of WOMEN AND WAR

"The aftermath of September 11 saw Victor Davis Hanson's emergence as a national scholarly resource. These essays tear through the self-doubt and defeatism to which many of his fellow academics succumbed. Reading these pieces as they came out, I felt less lonely about our historical situation. Through vast references to classical and modern history, Hanson shows that the War on Terrorism is part of a long story of the West's struggle against barbarism." — Robert Conquest, Senior Fellow at the Hoover Institution and author of THE GREAT TERROR

"Books that transcend mere descriptive narrative and seek to fix a value — political, philosophical, or strategic — on the events of 9/11 and their aftermath.... Equally robust, though in a style whose elegance contrasts with Mr. Ledeen's blunter muscularity [in THE WAR AGAINST THE TERROR MASTERS] is AN AUTUMN OF WAR.... The polymath Mr. Hanson...is quite the best writer one could hope to read on the sweep of strategy and on the lessons of history for post-9/11 America. His writing glitters with referneces to Thuycidides and to ancient Greece and is driven by two clear aims — to urge the West...toward swift and decisive military action against the sources of terror and to puncture the antiwar cant that abounds, especially on the academic left." — Tunku Varadarajan, The Wall Street Journal

"Bold and politically incorrect, AN AUTUMN OF WAR is like a breath of fresh air in pointing to the real causes of terrorist outrages and the need for a decisive response." — Richard Pipes, author of THE RUSSIAN REVOLUTION

"On September 11, Victor Davis Hanson wrote a short, angry, passionate essay that appeared three weeks later in the National Review.... The essay produced a strongly favorable response, as did the many others Hanson wrote during the painful autumn and early winter of 2001.... Hanson, a classicist and student of military affairs, became something of a media figure, arousing passions among readers as strong as those he himself put into words. AN AUTUMN OF WAR brings these pieces together.... Read history and heed its lessons..... As is so often the case, he is right.... Hanson has a lot more to say on many other subjects, among them the privileged Arabs, 'driven to murder by hatred and envy,' who are the real terrorists, and about the privileged Americans in academia and among the illuminati — he cites 'the likes of Mary Beard, Eric Foner, Frederic Jameson, Barbara Kingsolver, Arundhati Roy, Edward Said, Susan Sontag, Alice Walker, and a host of others' — who 'are not merely ignorant of politics, history and culture, but often downright immature, hysterical, and inarticulate.' As is so often the case, he is right." — Jonathan Yardley, Washington Post Book World