An Image for Longing 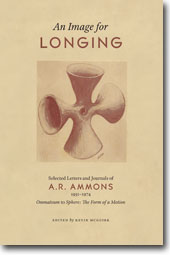 A.R. Ammons was a member of a remarkable generation of American poets. Born in the 1920s, these poets came of age with the second world war and came to prominence in the 1960s, a decade with which some of their most characteristic work is still closely identified. They are now part of our cultural and literary history. A generous selection of Ammons’s letters and journals, An Image for Longing will promote a renovated understanding of this important poet, sending readers back to his classic work with new appreciation, by drawing a picture of his career from its beginnings in the 1950s, through the 1960s, the decade of his remarkable ascendancy, to the culmination of its first phase with the publication of his major work, Sphere: the Form of a Motion, in 1974.

The story covered in An Image for Longing has several interconnected strands. It is a story of a career, the external matter of it: journal publications, contacts in the field, trying to publish a book; books published, positions, awards, fame. It is also the story the growth of a poet’s mind, as Ammons as an artist and intellectual, fulfilling certain potentials present in the letters of the 1950s, and gradually finding a way—a form and rhetoric—to articulate them fully in Sphere. Finally, it is the story of a man, awkward in the human realm, troubled in relations, but gradually finding a rest there. As he writes to his friend Harold Bloom on completing Sphere again: “I never felt as connected to other humans as I have since I finished the poem.”