The Oral History of Top Hits That Changed Rock, Pop and Soul 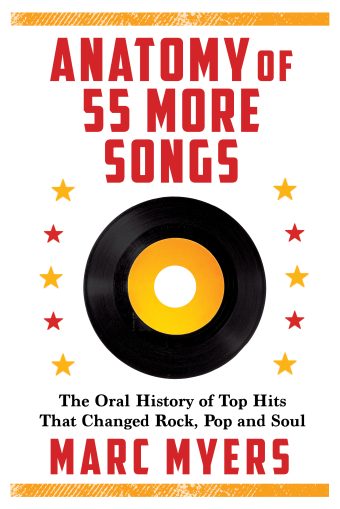 Songs that sell the most copies become hits, but some of those hits become something more—iconic recordings that not only inspire a generation but also change the direction of music. In Anatomy of 55 More Songs, based on his column for the Wall Street Journal, music journalist and historian Marc Myers tells the story behind fifty-five rock, pop, R&B, country, and soul-gospel hits through intimate interviews with the artists who wrote and recorded them.

Through an absorbing chronological, song-by-song analysis of the most memorable post-war hits, Anatomy of 55 More Songs provides a sweeping look at the evolution of pop music between 1964 and today. This book will change how you listen to music and evaluate the artists who create it.

"Through an absorbing chronological, song-by-song analysis of the most memorable post-war hits, Anatomy of 55 More Songs: The Oral History of Top Hits That Changed Rock, Pop and Soul is provides a sweeping look at the evolution of pop music between 1964 and today. This book will change how you listen to music and evaluate the artists who create it." — bookreporter  (Read the full review)

"A great example of this is the chapter about “Sunshine Superman” by Donovan.... It was also interesting to discover that the session musicians on “Sunshine Superman” included John Paul Jones on bass and Jimmy Page on guitar before the days of Led Zeppelin. Another great chapter is about Creedence Clearwater Revival’s “Bad Moon Rising”. ...This is just a small sample of the wealth of stories contained in Anatomy of 55 More Songs. The chapters are laid out in chronological order from “Walk On By” by Dionne Warwick to “If It Makes You Happy” by Sheryl Crow. Myers interviews David Byrne, Chris Frantz, Tina Weymouth and Jerry Harrison for the chapter on “Burning Down the House,” and Kenny Rogers for “The Gambler”. The chapters are fairly short, making it an easy read. An added bonus would be to listen to the song the chapter is discussing right before reading it to have it fresh in your head. Anatomy of 55 More Songs is a fantastic addition to any music lovers library." — Joey Williams, Glide Magazine  (Read the full review)

"Myers’ newest is the second book culled from his long-running Wall Street Journal column, ‘Anatomy of A Song.’ The first, a critical smash released in 2016, provided oral histories on the making of 45 era-defining hits from interviews with the artists that crafted them.... Myers brings you backstage for an incredibly detailed view of their inspirations and creations. These are engaging narratives that are dressed up with offbeat trivia that will make you the star conversationalist of any cocktail party.... Myers’ book also provides astute musical analysis that places the songs within the context of their time and meta musical trends.... The descriptions above just scratch the surface of these fine books, ones which belong on the bookshelf of any diehard music-lover and every music-maker seeking to capture lightning in a bottle." — Sal Cataldi, NYS Music  (Read the full review)

"Wall Street Journal arts reporter Myers continues his explorations of the kind of popular music that turns from melody to earworm. When he was 14, recounts Brian Wilson, a neighbor’s dog barked at his mom. When he asked why, she replied, 'Brian, sometimes dogs pick up vibrations from people.' Fast-forward a decade, and that offhand comment became the Beach Boys classic 'Good Vibrations.' Jimmy Webb, similarly brilliant, pushed the 5th Dimension to voice 'Up, Up and Away' so that, in the words of vocalist Billy Davis, 'The goal was to feel the song as we sang, so it sounded as if we were up in the sky at the mercy of the wind.' As he did in his previous volume, Anatomy of a Song, Myers does a fine job of getting behind the hits. Sometimes there’s only one person to reveal a story—Robbie Robertson, for instance, is the only member of The Band left to speak for how 'The Weight' came into being. (The setting, Nazareth, was inspired by the inside label of his Martin D-28 guitar.) The author examines other songs from different viewpoints, as with the six interviewees for Donna Summer’s 'On the Radio.' Altogether, Myers turns in a who-knew kind of book: Who knew that Thin Lizzy’s 'The Boys Are Back in Town' started off as an anti–Vietnam War song? Or that Chic, makers of the disco classic 'Good Times,' thought of themselves as jazz musicians who, as Nile Rodgers tells Myers, 'had set out to update Kool & the Gang'? The narrative contains plenty of joy, discontentment (Joan Jett recalls being weighed down by her best-known song: 'The bad reputation thing was imposed on me'), and even newfound respect. For example, when fronting his own band, Keith Richards realized what a hard job Mick Jagger had: 'being a front man is like nonstop, man.' With snippets of business, creativity, techno-wizardry, and raw emotion, a pleasure for music fans." — Kirkus Reviews  (Read the full review)

"Myers details how 55 famous songs were conceived, written, and recorded in this perceptive follow-up to 2016’s Anatomy of a Song. Myers provides a brief introduction to each of his picks, and their composers, musicians, and producers share stories behind each song, as well. There are surprising details about musical arrangements...and insight from artists about their lyrics.... Myers has a knack for capturing the artistry of songwriting and easily shows why these tracks are 'iconic but not tired.' This melodic collection will strike a chord with music fans." — Publishers Weekly

"Entertaining tidbits and insights infuse the second volume of Marc Myers’s eclectic array of musical hits. One of the real joys here is in the way that those interviewed are so expressive and generous with their unalloyed admiration for fellow artists. Anatomy is an enjoyable musical interlude — you inevitably sing the songs in your head as you read these stories." — Daneet Steffens, The Boston Globe

"Extending his well-received Anatomy of a Song to a second volume of entries culled mostly from his Wall Street Journal column, Myers says he looks for iconic 'but not tired' hits, tunes that influenced pop music, and songs 'with corners that long puzzled readers.'... In a format identical to the first book, entries here are in chronological order, dating from 1964 (“Walk On By”) to 1996 (“If It Makes You Happy”) and include “Rocket Man,” “Sunshine Superman,” “The Weight,” “Truckin’,” “Fly Like an Eagle,” “Highway to Hell,” “The Devil Went Down to Georgia,” “Don’t Stop Believin',” and “Burning Down the House.” Ephemeral, yes, but these songs are still shared by billions worldwide, and Myers adds important context by interviewing and extensively quoting the principal artists, composers, and producers." — Alan Moores, Booklist

"Insightful... Myers blends research and personal interviews with artists, songwriters, arrangers, producers, and others to create an appealing mix of pop music classics.... Each entry begins with a crisp black-and-white photo of the song’s artist, and, like an album’s liner notes, these pieces provide context and the backstory for each selected song. Pop-music fans of a certain age will enjoy this collection and might even use it as a playlist." — Library Journal  (Read the full review)