Anatomy of a Song

The Oral History of 45 Iconic Hits That Changed Rock, R&B and Pop 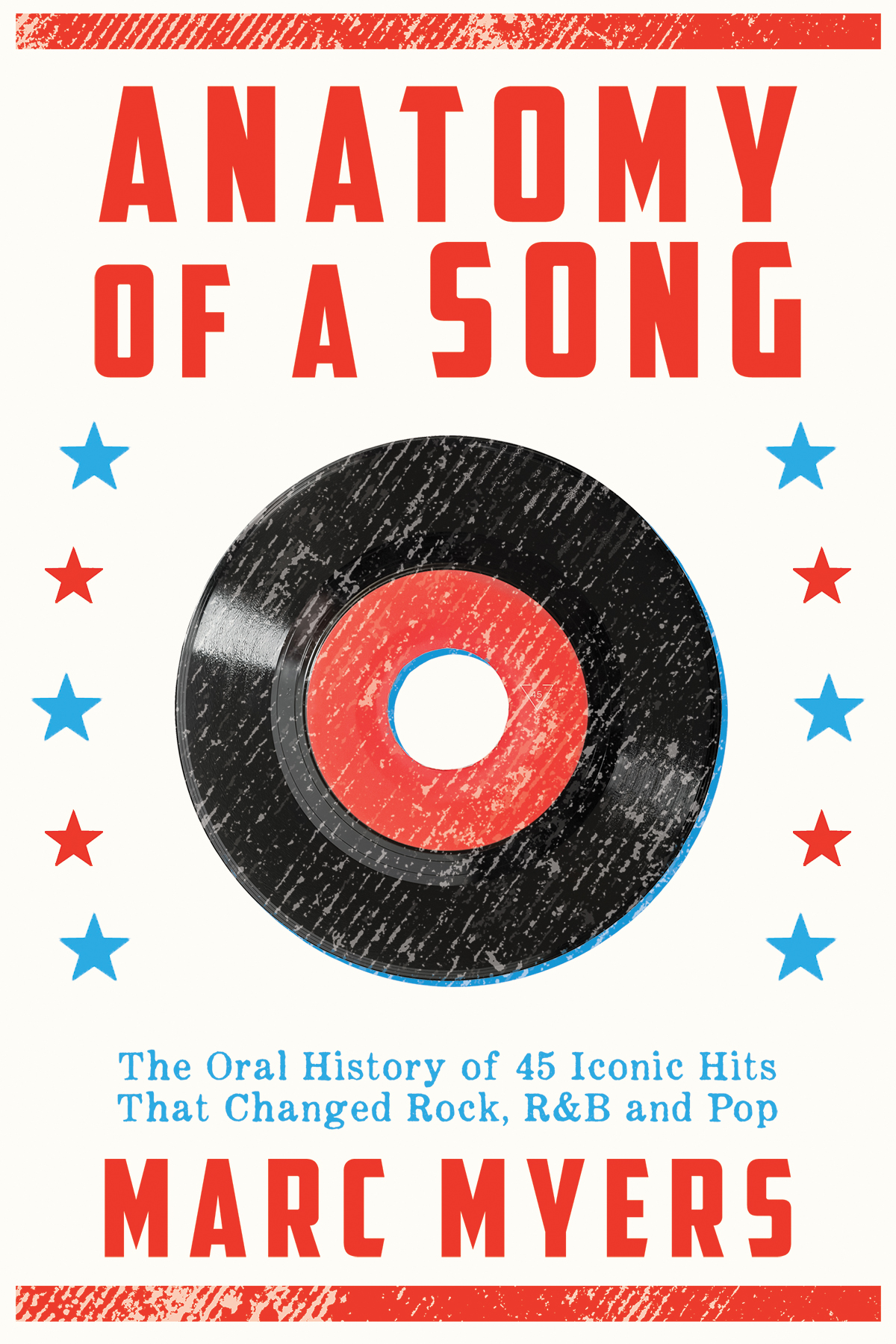 Songs that sell the most copies become hits, but some of those hits become something more—iconic recordings that not only inspire a generation but also change the direction of music. In Anatomy of a Song, based on the ongoing column for the Wall Street Journal, Marc Myers tells the story behind five decades of rock, pop, R&B, country, disco, soul-gospel, and reggae hits through intimate oral history interviews with the artists who wrote and recorded them.

Part artist confessional, part music history, Anatomy of a Song ranges from Lloyd Price’s "Lawdy Miss Clawdy," one of rock 'n' roll's first hits, to Janis Joplin's "Mercedes Benz," Loretta Lynn's "Fist City," and R.E.M.'s "Losing My Religion." Mick Jagger demystifies the eclectic ballad "Moonlight Mile," a song not about drugs but about loneliness on a grueling European tour. Joni Mitchell remembers arriving brokenhearted in the village of Matala on the Greek island of Crete and living in a cave with the "mean old daddy" who went on to inspire her 1971 hit "Carey." And Rod Stewart, Elvis Costello, the Clash, Jimmy Cliff, Roger Waters, Jimmy Page, John Fogerty, Keith Richards, Cyndi Lauper, and many others reveal for the first time the emotions and technique behind their influential works.

Through an absorbing song-by-song analysis of the most memorable hits from 1952 to 1991, Anatomy of a Song provides a sweeping look at the evolution of pop music. This book will change how you see music history and the artists who created it.

An Amazon Best Book of the Month in Nonfiction

"Each story is a pleasure to read and will deepen your listening experience. Which is saying something…. You might initially wonder what's left for you to learn…. Turns out to be plenty…. Myers bears down hard on these songs, and the artists rise to the standard he sets…. The magic happens when the artists themselves speak, and they deftly—and movingly—cover a range of issues, from the technical to the emotional." — Anthony DeCurtis, The New York Times Book Review

"Anatomy of a Song is a ‘jukebox oral history’ of 45 iconic pop, rock and R&B hits - and a treasure trove of music trivia between hard covers…. Myers is particularly good on the competition within bands and between them to produce the best possible songs…. That was the unlikely cross-pollination at the heart of so many of the classics which are so rightly celebrated in this splendid volume." — Charles Kaiser, The Guardian

"Myers in the book seems a highly developed critic, fascinated by the technical aspects of musical production, and yet at the same time the least judgmental…. All the songs he examines have that inexplicable power of persistence, classics that have entered the permanent deposit of popular song, and none of them needs a sales agent. Myers’s goal in Anatomy of a Song is to produce a ‘love story.’ It doesn’t ‘purport to be a list of the best songs ever recorded,’ he writes. It is instead ‘a subjective collection of music milestones,’ aiming at ‘a starting point for conversation and debate.’ The result is surprisingly sweet…. The critical ability of Marc Myers shows in his selection of topics and his persistence in hunting down the right people to talk about their songs. But his talent as a writer shows in his willingness to get out of the way and let them talk…. Myers pushes his subjects to recollect what had really happened that day in the studio, that moment when the song first came to mind, that instant when the radio began to play it…. The Wall Street Journal’s editors were right to encourage Myers to write his column on ‘iconic hits,’ and Myers was right to gather them now in a book." — Joseph Bottum, Washington Free Beacon

"Engrossing…a rich history of both the music industry and the baby boom era." — Los Angeles Times

"I picked up the best book last week. It's called Anatomy of a Song by Marc Myers. It’s a music lover’s dream…. There’s nothing more interesting in my mind than getting the ‘inside baseball’ take on hit records." — Michael Heaton, Cleveland Plain Dealer

"What a dream book proposal: pick 45 different songs and then interview those closest to their creation. Born with his column in the Wall Street Journal, Marc Myers took that idea even further and published one of the most informative music books in a long time. Starting with Lloyd Price’s 'Lawdy Miss Clawdy' in 1952, there are enough inside tales to mesmerize fanatics and semi-fanatics who remain enthralled by rock & roll and all its eras. The arc can’t be beat: from Price to the Isley Brothers, Janis Joplin, Dion, the Doors, the Young Rascals, the Rolling Stones (Keith Richards’ recollections of recording 'Street Fighting Man' are priceless), right on through to Elvis Costello, Cyndi Lauper, and R.E.M. The amount of details unearthed in the interviews feels like eavesdropping on two longtime friends talking about old times. One of the winning elements is that the chapters are short, and leave the reader fulfilled but still wanting just a little more. It’s kind of like the original 45s that are being celebrated: the best things in life don’t overstay their welcome. Still, in a recent story Myers recalls having an interview set with Lou Reed for the book, only to find out he was too sick to talk. Two days later Reed died. Hopefully, though, Anatomy of a Hit: The Encore is on the horizon. More, more, more!" — Bill Bentley, The Morton Report

"Wonderful revelations from the artists interviewed…. It's an assortment reflecting the touchstones and turning points of the last 60 years of hit-making. Anatomy of a Song is a great holiday gift idea (preferably for someone who lives in your house, so you can read it, too). ‘Please think of this book as an oral history jukebox,’ writers Myers in his introduction. By not playing favorites, he shows that the best jukeboxes are the ones with the widest range of choices." — Julie Hinds, Detroit Free Press

"We all know how important music is, and can be. Now find out about the stories behind five decades of songs that changed and shaped the world—or at least the movements of pop culture—in Marc Myer’s terrific Anatomy of a Song. Hop aboard the literary jukebox and find out the back stories of the Isley Brothers’ 'Shout,' The Kinks’ 'You Really Got Me,' Led Zeppelin’s 'Whole Lotta Love,' Aerosmith’s 'Walk This Way,' Merle Haggard’s 'Big City,' R.E.M’s 'Losing My Religion' and many other familiar tunes from the artists who wrote and recorded them." — Parade Magazine

"Many of us think we know the stories behind our favorite songs. In the digital era, there’s no shortage of information online for the curious listener. But it takes a storyteller like Marc Myers to put trivia into its historical context, to make a narrative out of what would otherwise just be speculation…. Myers shows us how these songwriters artfully, purposefully and sometimes accidentally tap into our secret yearning with their own. There’s all kinds of fun stuff here…. Perhaps the greatest gift of Anatomy of a Song is its range. Myers considers widely the definitions of rock, R&B and pop, including their influences from a variety of sources…. This is a book that encourages you to go back into your record collection, to the hits you think you remember well." — Heather Scott Partington, Las Vegas Weekly

"A detailed look at 45 iconic popular songs. Five decades of music are represented, beginning with Lloyd Price’s ‘Lawdy Miss Clawdy’ in 1952 and ending with R.E.M.’s ‘Losing My Religion’ from 1991. The selected tunes span all genres: the British Invasion is represented by the Kinks’ ‘You Really Got Me’; Motown is covered with ‘Reach Out I’ll be There,’ by the Four Tops; and the New Wave Eighties boasts songs by Elvis Costello, Blondie, and the Clash. Each entry begins with a narrative explaining the song’s history and importance and then moves on to excerpts from interviews with key people—for example, Myers talked to Loretta Lynn for ‘Fist City’ and to Roger Waters for Pink Floyd’s ‘Another Brick in the Wall.’ Other interviews feature songwriters, producers, and audio editors. This will entice general readers and music lovers alike. In his introduction, Myers calls the book an ‘oral history jukebox,’ and popular-music fans everywhere will want to be ready with a pocketful of dimes." — Rebecca Vnuk, Booklist

"A winning look at the stories behind 45 pop, punk, folk, soul and country classics.... A smart, gracious book. His interviews yield some fascinating details." — Kevin Canfield, The Washington Post

"Myers lets the artists and musicians involved in enduring hits tell the stories behind them in an effort to give us an intimate glimpse—as much as is ever really possible—into the process of the making them come to life. The songs he covers include, among others, Lloyd Price's 'Lawdy Miss Clawdy,' Little Willie Littlefield's 'K.C. Loving,' The Marvelettes' 'Please Mr. Postman,' and The Temptations' 'My Girl' to The Rolling Stones' 'Street Fighting Man,' Jimmy Cliff's 'The Harder They Come,' The Clash's 'London Calling,' and Merle Haggard's 'Big City.'… The artists he speaks to reveal, in Myers' words, the 'original motives for writing the song as well as the emotions they poured into the song and the discipline, poetry, musicianship, studio techniques, and accidents that helped turn these songs into meaningful generational hits that still endure today.' Myers provides a historical sketch of the times into which each song entered, and which it affected…. Who doesn't like to listen to musicians tell their stories about the genesis of a song? Or to hear them laugh at the deep meaning that listeners often invest in it when for them it was, well, just a song about a breakup? Myers' book has something for everyone…. Like any other list of songs, this one will invite and provoke conversation." — Henry Carrigan, No Depression

"A cultural history of the elusive hit single, focused on artists’ recollections and studio alchemy…. Choosing 45 representational songs that topped the charts or were otherwise prominent, the author chronicles American pop from about 1952 to 1991, the era when radio could effectively ‘break’ a song. Developing this overall narrative, Myers provides several paragraphs of context for the moment in which a song arrived, then switches to recollections of artists and producers. It’s a clever concept…. His interview subjects are well-chosen…. The book’s strength lies in thoughtful, wry reflections from artists including Elvis Costello, Jimmy Cliff, Stevie Wonder, Booker T. Jones, Dr. John, and Debbie Harry. An entertaining record of the soundtrack of the baby boomer era." — Kirkus Reviews