Assassins of the Turquoise Palace 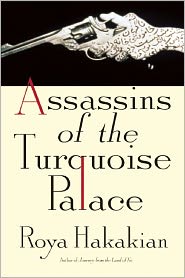 Assassins of the Turquoise Palace tells the story of a botched assassination that changed the history of Iran. On the evening of September 17, 1992 in Berlin, a man stood guard at the door of a little-known restaurant called Mykonos. Two others with him burst in, heading for the smaller room behind the restaurant's main hall where a party of nine had gathered for a dinner event. Sounds of shooting, shouting and shattering glass filled the air. Moments later, the men and their guard and their driver sped away in an old BMW. The nine men were left splayed over bullet shells, shards of broken china, and slow-forming streams of blood.

The three who died instantly were the top leaders of Iran's Democratic Party of Kurdistan. They had been invited to Germany by leaders of the Social Democratic Party to the annual Socialist International Congress. With their deaths, the most prominent voices of an otherwise voiceless people had been silenced, fulfilling Ayatollah Khomeini's 1979 call of jihad against the Kurds for refusing to disavow their nationalist cause for his version of Islam. For the German social democrats who had failed to protect their high-profile guests, the killings delivered a blow to their party's spirit and standing that would take years of hard work to recover. In the first few hours after the incident, which ultimately left four dead, news reports called it the fallout from an internal power struggle between Kurdish factions. The morning papers blamed Saddam Hussein, notorious for his longstanding hatred of the Kurds. Some in the German government suspected who the real culprits were, but said nothing. In the absence of scrutiny, they probably would have let things be. But the Social Democratic Party was pressing, and to make matters worse, a ghost appeared—a survivor.

The day after the shootings, a man, one of the nine guests who had been at the dinner table but had remained unscathed by the shooting, stood at the police barricades around the Mykonos restaurant. Parviz Dastmalchi bravely told the throng of reporters that the mastermind behind the assassinations was the regime in Tehran, led by the president and the Supreme Leader.

European governments had, by custom, treated Iran's crimes like minor diplomatic infractions, as if in deference to any power that would blacken the eye of America, their common rival. But a man named Bruno Jost rose up against this vile complacency. Jost and his colleagues turned Mykonos into a surprising story of triumph against terror. Against all odds, Jost mounted a trial that ultimately convicted the leadership of Iran—the Supreme Leader, Ali Khameni, the president, the foreign minister, and the head of intelligence—as masterminds of the murders.

This verdict changed the fate of the survivors and the exile forever, the legacy of the victims, and shaped the future of Iran's democratic movement. This was no less than a silent coup d'état, for no longer only America, but Europe too, now turned its back on Iran. The diplomatic blackout catapulted an unknown candidate with a moderate message—Mohammad Khatami—into the Iranian presidency, and forged a global dialogue. In the process, a fledgling pro-democracy aspiration turned into a major reform movement as well.

"[A] riveting account of a multiple murder and trial that led to a paradigm shift in Europe’s relations with post-revolutionary Iran.... A nonfiction political thriller of the highest order." — Kirkus Reviews (starred review)

"This is a brilliant, riveting book, with all the elements of a great thriller—a horrific crime, sociopathic villains, international intrigue, personal betrayals, a noble prosecutor and an honorable judge. And it is all too real: with remarkably comprehensive reporting and brisk, smart writing, Roya Hakakian has told a great story but, more important, she has made plain the lethal immorality at the heart of Iran's regime." — Joe Klein, Time

"Carefully researched and vividly written…. A lively account of an extraordinary trial, Hakakian’s book can be read as an unsettling reminder of the dangers of excessive zeal." — "Editor’s Choice", The New York Times Book Review

"As the world contemplates the pressing predicament of Iran, Roya Hakakian offers one possible solution through a riveting tale that is most timely and profoundly urgent. This superb true story is much more than an international In Cold Blood— it is a stunning parable of the central struggle of our times between totalitarianism and the rule of law." — R. James Woolsey, Director of the CIA 1992-1994

"Even as they continue to breach every known international law, all the while protesting at interventions in their 'internal affairs', the theocrats in Tehran stand convicted of mounting murderous interventions in the affairs of others. Roya Hakakian's beautiful book mercilessly exposes just one of these crimes, and stands as tribute to the courageous dissidents and lawyers who managed one of that rarest of human achievements; an authentic victory for truth and justice." — Christopher Hitchens