The Best of Wolcott Gibbs from The New Yorker, with a Foreword by P.J. O'Rourke 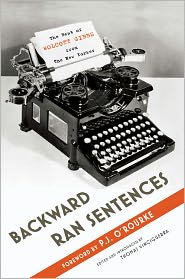 "Finally back in print. It’s delicious stuff. You’ll find ‘Talk of the Town’ stories, profiles, pitch-perfect parodies (the one of Ernest Hemingway is especially wicked), and reviews—of A Streetcar Named Desire, Death of a Salesman, Waiting for Godot, and dozens of other plays—drawn from Gibbs’s stint as the magazine’s theater critic. Gibbs wasn’t always right, and he didn’t go out of his way to be nice. But he was always sharp, and every one of these pieces could be a primer on everything that magazine articles should be (but very seldom are). Editor Thomas Vinciguerra has also included a crib sheet—‘Theory and Practice of Editing New Yorker Articles’—that aspiring writers should memorize immediately." — The New York Observer

"Fans of The New Yorker will welcome this collection of pieces written by Gibbs spanning the late 1920s through the early 1950s. New York Times contributor Vinciguerra intends to rescue Gibbs from growing obscurity with his introductory biographical essay and careful selection of articles. Gibbs was versatile, serving as an editor in addition to contributing to ‘The Talk of the Town’ and writing profiles, parodies, short stories, and theater criticism. Profiles include the obscure, like Miss Rita Ross, the eccentric cat lady who collected stray cats to deliver to the SPCA, as well as the more famous, such as presidential candidate Thomas Dewey. Gibbs's wit shines through in the parodies.... In a foreword, P.J. O'Rourke provides his own parody of Gibbs. Readers who enjoy the style and wit of The New Yorker will love this collection. It is easy to dip into for the perfect piece, and the large selection will satisfy." — Judy Solberg, Library Journal

"He may be obscure now, but Wolcott Gibbs was a New Yorker giant who held sway in the magazine's glory years with the likes of E.B. White, James Thurber, and Dorothy Parker. Gibbs's 1958 death made the New York Times's front page. Freelance journalist Vinciguerra offers a hefty sampling of Gibbs's versatile and voluminous oeuvre, the best-remembered his 1936 profile of publisher Henry Luce that doubled as a spoof of Time magazine and contained his famous quip on Time's weirdly inverted syntax: 'Backward ran sentences until reeled the mind.' In the wake of merciless profiles of presidential candidate Thomas Dewey, and of New Yorker contributor Alexander Woollcott, Dewey impounded Gibbs's bank account and Woollcott severed his relationship with the magazine. In his 18 years as the New Yorker's chief drama critic, Gibbs panned Beckett and Sartre, found My Fair Lady 'highly intelligent and tremendously engaging,' and arrived intoxicated at The Crucible's opening.... This book may revive some interest in Gibbs, especially among journalists, critics, and wordsmiths who will appreciate his dry, sharp wit, keen observational skills, elegant condescension, and take-no-prisoners attitude." — Publishers Weekly