One Mother's Crusade, the Religious Right, and the Struggle for Control of Our Classrooms 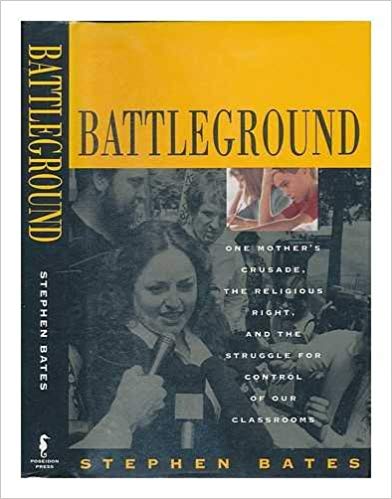 "A fascinating, compelling, highly readable account of a major clash in American society…a real page-turner. What I most appreciated is Bates’s sense of the complexity of the events and his unbiased and balanced treatment of the ideas and key players. An excellent and important book." — Diane Ravitch

"Lucid, balanced, and compelling.... The book reads like a novel, with characters fully drawn and moments of high drama, at the same time as it illuminates some of the most difficult dilemmas of democracy." — Albert Shanker, President, American Federation of Teachers

"No matter where you stand, Bates’s sensitive and well-crafted account of a famous battle over public education will give you a new angle of vision." — E. J. Dionne, Jr.

"Battleground is an intelligent, fair, and beautifully written account of the attempt by a group of parents in East Tennessee to cleanse their public school system of books they deemed sinful and unchristian, and of the resultant national hoopla. This book’s timeliness and historical value are enhanced by the author’s care for language, cast of vivid characters, and respect for viewpoints not necessarily his own. Battleground is entertaining and enlightening." — Melissa Faye Greene, Author of Praying for Sheetrock

"Beautifully researched and meticulously balanced.... It is rare to find a book as thorough and tempered as this one." — Legal Times

"This is essential reading for educators, religious leaders, and anyone concerned about book banning and the limits of tolerance." — Library Journal

"A balanced, well-documented account of a battle recently fought by a handful of Tennessee fundamentalist parents against high-school textbooks. Bates traces the course of the controversial censorship debate that came to be known as 'Scopes II'—a debate that pitted the powerful Christian organization of Concerned Women for America against Norman Lear's People for the American Way. Bates also provides intimate glimpses into the lives and minds of the leading combatants.... He refuses to dismiss these men and women as mere lunatics of the religious right. Rather, he contends that, in this case, the fundamentalists were treated condescendingly by the media, who often distorted the facts; and he raises some of the questions that the media allegedly chose to ignore: 'How should a secular, tolerant society cope with devout but intolerant citizens in both the public school and the public square? How much control should parents wield over their children's education? How should the public handle religious topics and religious students?' While never encumbering his text with ponderous arguments about constitutionality or educational theory, Bates strikes with range and depth at the heart of these issues, crucial for educators and all concerned Americans." — Kirkus Reviews  (Read the full review)

"Fully as dramatic as Inherit the Wind." — Boston Globe

"A chilling tale of what happens when politics and morality collide in one American school. Read the book, especially if you're a parent." — Detroit Free Press

"What comes through the pages of this extraordinary account...is the essence of the doctrine separating church and state and the essential meaning of heresy." — Chicago Tribune

"In rural Tennessee, a fundamentalist Christian mother took a peek at her daughter’s reading textbooks and was horrified to find materials that, in her mind, not only conflicted with her religious beliefs but made her suspicious of a conspiracy from anti-religious establishments. Claiming that the texts represented secular humanist or New Age thought, the mother sought to have the books removed. Her crusade, sanctioned by the Moral Majority and other conservative groups, became the case of Mozert v. Hawkins County Board of Education and was dubbed “Scopes II” by the press. The author’s evenhanded treatment of the ensuing volatile public debates throughout the United States is commendable. This is essential reading for educators, religious leaders, and anyone concerned about book banning and the limits of tolerance." — Library Journal