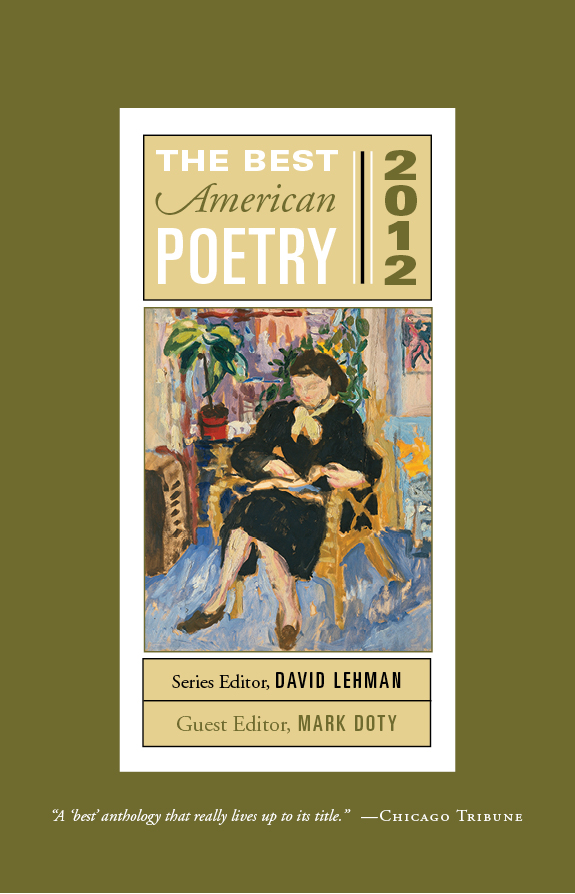 Mark Doty brings the vitality and imagination that illuminate his own work to his selections for the twenty-fifth volume in the Best American Poetry series. He has chosen poems of high moral earnestness and poems in a comic register; poems that tell stories and poems that test the boundaries of innovative composition. This landmark edition includes David Lehman’s keen look at American poetry in his foreword, Mark Doty’s gorgeous introduction, and notes from the poets revealing the germination of their work. Over the last twenty-five years, The Best American Poetry has become an annual rite of the poetry world, and this year’s anthology is a welcome and essential addition to the series.

"One of the strongest collections in this estimable series' 25-year history." — Bruce Jacobs, Shelf Awareness

"Now in its 25th year, the Best American Poetry anthologies have become something of a yearbook for American versifiers. The 2012 volume runs the gamut of styles and positions, from the experimentally mixed registers of Rae Armantrout ('Information describing the fading laser pulse// is stored// is encoded// in the spine states/ of atoms') to the unrelenting intensity of Frank Bidart ('the burning// fountain is the imagination// within us that ingests and by its/ devouring generates// what is most antithetical to itself') to an extended meditation on art and family by Paisley Rekdal: 'Here is the killer with his handsome face./ Here is Manson, Bundy, Hitler,/ the Terror’s row of heads still spiked on stakes.' Doty, this year’s guest editor, is a populist at heart, who believes poetry is available and useful to all who are willing to seek it out, and so he has chosen poems that take the national pulse in the midst of a tensed political moment (Joy Katz looks to the 'Department of Trance/ Department of Dream of Levitation/ Department of White Fathom' for answers) and also look mysteriously inward at a timeless human core as only poetry can: 'I keep my distance like the tines/ Of a fork from one another,// Dressing, undressing the fabulous wounds,' writes Noelle Kocot. As usual, there is something for everyone; this is a particularly good volume in this series." — Publishers Weekly (starred review)