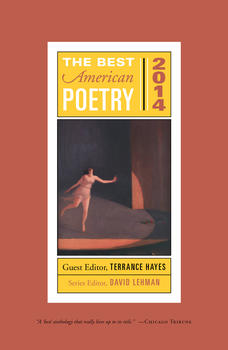 The first book of poetry that 2014 MacArthur Fellowship prize-winner Terrance Hayes ever bought was the 1990 edition of The Best American Poetry, edited by Jorie Graham. Hayes was then an undergraduate at a small South Carolina college. He has since published four highly honored books of poetry, is a professor of poetry at the University of Pittsburgh, has appeared multiple times in the series, and is one of today’s most decorated poets. His selections for 2014 edition of The Best American Poetry reflect the restlessness of his own barefaced poems, and together the poems in this volume capture with singular artistry the diversity of American culture.

In this edition readers will find such known favorites as John Ashbery, Anne Carson, Frederick Seidel, and Mary Ruefle alongside the newer voices of Camille Dungy, Amaud Jamaul Johnson, Valzhyna Mort, and Sandra Simonds. For over twenty-five years the Best American Poetry series has stood as the foremost compendium of contemporary poetry, an annual record of exceptional works published over the past year and provocative testimony to the art form’s significance today. Always eagerly anticipated, the 2014 volume begins with David Lehman's “state-of-the-art” foreword followed by a beguiling introduction from Terrance Hayes on his picks for the best American poems of the past year. Illuminating comments by the contributors conclude the volume.

"Hayes, a 2014 MacArthur Fellow whose 2010 collection, Lighthead, won the National Book Award for poetry, recalls that the first book of poetry he ever bought was the 1990 edition of Best American Poetry. Given that he has ‘depended on [the series] so deeply for literally all of his life as a poet,’ it’s not surprising that Hayes has applied such a discerning eye in selecting poems for this year’s edition. ‘I’m not ashamed to say I wanted a diverse mix,’ he states, and the result feels like America at its best and most inclusive, with Sherman Alexie’s ‘Sonnet, with Pride’—an ingenious modification of the form—opening the collection and setting the tone. The blues color the collection and elegies are another prominent feature; Larry Levis (1946–1996) ghosting in with ‘Elegy with a Darkening Trapeze Inside It,’ a selection from his uncollected ‘late’ poems. Rita Dove and Yusef Komunyakaa both meditate and comment on the complexities of the concept of Négritude. Hearts in need of wrenching will get theirs, particularly Sharon Olds’s ‘Stanley Kunitz Ode’ or Patricia Lockwood’s viral wonder, ‘Rape Joke.’ One of the strongest volumes in recent years, Hayes makes an offering to readers: ‘salute what I salute, and be transformed as I have been transformed.’" — Publishers Weekly

"A High Volume of Poetic Greatness…. Last November, while on a West Coast poetry reading tour, I stayed for a few days at my friend Beverly’s San Francisco home. Beverly loves books more than anyone I know. Floor to ceiling shelves line every inch of available wall space, and there are additional cartons in the garage and in storage. Serendipitously, the guest room doubles as the Poetry Room, everything alphabetized and divided into categories and sub-categories. It was there that I discovered the Best American Poetry series in its entirety. I had come across a volume or two and was already an admirer of the work of the Senior Editor, David Lehman, but never before had I had access to all twenty-five volumes. Jet lagged and bleary eyed, I stayed up as long as possible, devouring volume after volume. The next afternoon I was still at it, vaguely annoyed when I had to stop and attend my own reading. As a poet, my knee-jerk reaction to anything labeled ‘best’ is ‘How do you know?’ or ‘By whose standards?’ David Lehman’s 2011 introduction provided some insight into the editorial methods by exploring the concept of poetic greatness and the standards we use, and the ways in which an editor must suspend his own ‘natural resistance’ to new forms and new ideas. This year’s Guest Editor, National Book Award-winning poet Terrance Hayes, admits in his introduction to finding himself obsessing over the concept of ‘best’ and concluding that there are all kinds of ‘bests,’ representing a ‘unity of contradictions.’ What I will attest to, in all of these volumes, including the current one, is that there is brilliance, there is innovation, there are surprises, and there are no poems that I would unequivocally state are unworthy of inclusion. The series began in 1988, and employs a different poet as Guest Editor each year, who is responsible for the final selection. For the most part, the poems were published during the previous year.... David Lehman’s early practice of writing forewords has evolved into a ‘state of the art’ statement…. Another aspect that distinguishes this series is a lengthy section (42 pages) of contributors’ notes and comments. Rather than the usual array of accomplishments and/or cute one-liners, an opportunity is provided for the poets to write about the published pieces." — Puma Perl, Chelsea Now