Best Poems of the English Language

From Chaucer Through Frost 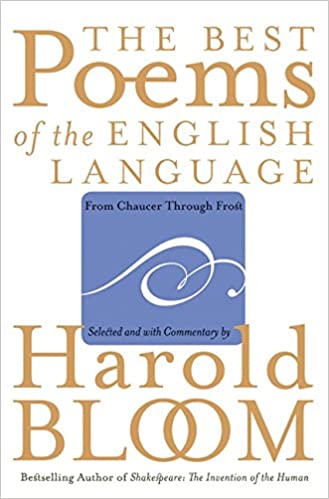 This comprehensive anthology offers renowned critic Harold Bloom’s choice of the best of six centuries of great British and American poetry, selected in accordance with his three absolute criteria: aesthetic splendor, intellectual power, and wisdom. In Bloom’s introductory essay, “The Art of Reading Poetry,” he presents his critical reflections of more than half a century devoted to reading, teaching, and writing about great verse, the literary achievement he loves most. Throughout this volume, Bloom includes extensive introductions to each poet and to many of the individual poems. More than any other anthology, this book provides readers who desire the pleasures of sublime art with nearly everything they need in a single volume.

"Bloom is, I argue and many others agree, the greatest critic of literature in English writing today.... To read Bloom's insights here is to bask in the emanation of genius. As entertaining and erudite as his choices of the works he most loves are, the book's overriding strength is the guidance it gives, in context and comprehension. His opening essay, 'The Art of Reading Poetry,' is crisp, strong and nourishing even to an inveterate reader.... Throughout this book...there is gleeful celebration of the ecstasy of language, imagery, intelligence — and life. Bloom's capacity to recall immense amounts of poetry gives him — or gives us — two marvelous benificences. One is that he is a wonderful teacher, tracing allusions and references, some perhaps entirely unconscious, from one poet to another. He can identify this intermingling with precision and concision that is fascinating. The other capacity is that he recognizes cultural patterns and influences where few others — at least few others that I have ever known or read — can.... Bloom is both cherished and detested for dismissing as pernicious the cultimulturalist politics that dominate so much of the academic world today.... As these postmodernist predators continue their war against classic aesthetics, humanities and objective examination of civilization, Harold Bloom stands as a hero of responsible values. May his life be long and his intellectual tribe increase. Long after today's faddists are forgotten except for the sake of historical ridicule, Bloom and the richness of insight he brings to art and especially to literature will live on. As will this extraordinary, enduring collection and commentary." — Michael Pakenham, Baltimore Sun

"You can't argue with the quality of [Bloom's] picks.... What separates Bloom's offering from existing anthologies has more to do with his commentary than his choices. Taken on their own, his opening essay, 'The Art of Reading Poetry,' and his introductions to each poet could form a neat sampler of literary history, tracing English-language poetry's course through centuries-old lines of influence. His tone is at once erudite and conversational, Bloom mixes snippets of the poets' lives with close textual readings.... His passion for text-based exposition gives his writing its great heart. Poetry is serious business for Bloom." — Tri-City Herald (Washington)

"Literary lion Bloom's earliest books, reaching back to 1959, examine the work of Shelley, Blake, and Yeats, poets that now figure prominently in his latest prescription for good reading, a massive collection of the best of 108 British and American poets writing in English from Chaucer through Robert Frost. Declaring poetry a 'high and ancient art,' and discussing its figurative and allusive elements in an instructive essay called 'The Art of Reading Poetry,' Bloom analyzes the aesthetics of poetry and what poetry does for us and explains what he believes makes one poem better than another. He also provides illuminating assessments of each poet.... Every serious reader of poetry really must begin with the books [Bloom] ardently loves and champions, and this comprehensive anthology is an ideal starting place." — Booklist

"Harold Bloom had the originality and courage to resist the orthodoxies of his day and...sought to make his own system rather than be enslaved by one unsympathetic to his genius. And so, Bloom entered the visionary company of critics in order to do nothing less than shape his own canon of what is truly great in literature.... Bloom describes Best Poems of the English Language as 'the anthology I've always wanted to possess. It reflects sixty years of deep and passionate reading...'. And this is the key to so much that is in these pages; not only the selection, brilliant as that is, but also the learning, the understanding, the profound feeling for all that is great in poetry. Aesthetic, moral and intellectual judgment are superbly blended to produce a volume uncommonly valuable to all who appreciate poetry and know that no matter how much they know and love it, there are always greater understandings just over the horizon.... Possessed of the highest critical standards and capabilities himself, he offers in his introduction to this anthology some splendid opportunities for the reader to learn how to distinguish gold from dross. With admirable succinctness and ingenuity, he lays out the complex standards by which such judgments can be made and he even provides examples of works that make the grade along with ones that don't.... Superb." — San Francisco Chronicle

"In this massive anthology, Bloom's strongly held, and deeply felt, preferences for the most productive misreadings in the language come to the fore brilliantly. Bloom has developed his tastes over a lifetime and specifically casts this book as their summation: 'the anthology I've always wanted to possess.'... It is the headnotes that make the book indispensable. The heart of the book, of course, is its choice of poems, most rightly well-known, some (from Jones Very to Conrad Aiken) famous in their time, but now obscure: despite its title, Bloom ends not with Frost but with Hart Crane, whose visionary rhapsodies encapsulate, for him, modern poetry's powers. Popular favorites (Lewis Carroll, Rudyard Kipling) also make the cut, as does the 17th-century 'Tom O'Bedlam's Song,' which Bloom calls 'the most magnificent Anonymous poem in the language.' The book is filled with hundreds of taste-making turns and asides.... This is sure to be a formative book for experienced readers and neophytes alike." — Publishers Weekly

"Bloom champions 'the splendor of figurative language,' 'cognitive power,' and allusiveness as the core values of poetic mastery.... Bloom rarely bores, and at his best achieves a cogency worthy of the poets he so deeply admires." — Library Journal