Best of the Best American Poetry 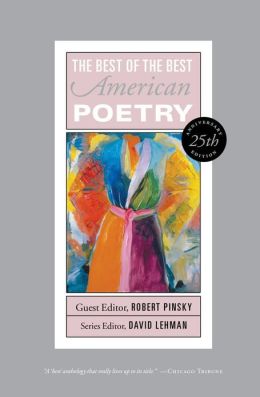 This special edition celebrates twenty-five years of the BEST AMERICAN POETRY series, which has become an institution. From its inception in 1988, it has been hotly debated, keenly monitored, ardently advocated (or denounced), and obsessively scrutinized. Each volume consists of seventy-five poems chosen by a major American poet acting as guest editor-from John Ashbery in 1988 to Mark Doty in 2012, with stops along the way for such poets as Charles Simic, A. R. Ammons, Louise Glück, Adrienne Rich, Billy Collins, Heather McHugh, and Kevin Young. Out of the 1,875 poems that have appeared in The Best American Poetry, here are 100 that Robert Pinsky, the distinguished poet and man of letters, has chosen for this milestone edition.

"Each year a new volume in the Best American Poetry series, founded by poet David Lehman, appears, each edited by a distinguished American poet, the likes of A. R. Ammons and Amy Gerstler. To celebrate the series' twenty-fifth anniversary, Lehman asked former poet laureate Pinsky to select 100 'best of the best.' The result is a concentrated, high-caliber, and exhilarating overview of the intensity and artistry that have made American poetry so splendidly varied and vital since 1988. In his far-reaching and enlivening introduction, Pinsky, an inspired poetry advocate, explains that his criteria were 'ear, imagination, and urgency'; that is, poems that embody the 'sense that the ancient art must strive to get to the bottom of things, that a lot is at stake.' The selections are arranged alphabetically by poet, ranging from Allen Ginsberg to Kevin Young, Megan O'Rourke to Adrienne Rich. Given the depth of Lehman and Pinsky's opening essays and the concise poet biographies and the poets' original statements about the writing of the poems, this is an anthology of broad scope, serious pleasure, and invaluable illumination." — Donna Seaman, Booklist

"Poetry is important, as a form of expression that does (or can) stand outside narrative, that makes meaning through language, that connects us through the music of words…. Concise, cutting, to the point, offering snapshots of the inner life, like bits of consciousness unfurled. For proof of that, we need look no further than Best of the Best American Poetry: 25th Anniversary Edition, a compendium of the 100 'best' poems published in the Best American Poetry anthology series over the last 25 years. Normally, I’m wary of these 'best of' designations, but the Best American Poetry collections are terrific precisely because they recognize the limitations of the game they’re playing, the idea that any group of poems can encapsulate the breadth of all the poetry that’s been written in America in a given year. The Best of the Best American Poetry: 25th Anniversary Edition encodes that conflict into its very marrow. 'An intimidating task,' guest editor Robert Pinsky puts it, describing the rigors of selecting 100 poems from the 1,875 that have thus far been published in the series…. The strength of the book (which Pinsky compiled with the aid of series editor David Lehman) is its sense of subjectivity, the way these poems illustrate their editor’s aesthetic, and in so doing, tell us something of how poetry operates in the world." — David L. Ulin, Los Angeles Times