Between War and Peace

Lessons from Afghanistan to Iraq 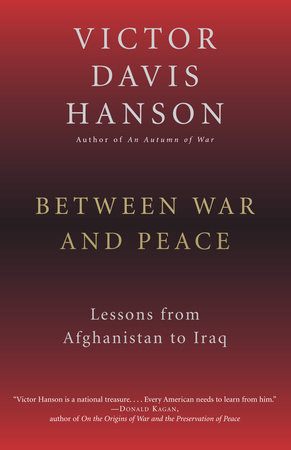 "Victor Davis Hanson, a military historian and commentator on foreign affairs, has collected some three dozen columns published in National Review Online and other journals between January 2002 and July 2003 in BETWEEN WAR AND PEACE, which traces the events leading up to and immediately following the invasion of Iraq. The recurring theme is the moral necessity of taking war to...seats of evil.... But just as often, Hanson's enemies are far closer to home.... Precision-guided history lessons." — The New York Times Book Review

"The essays that make up BETWEEN WAR AND PEACE form a robust, even angry counterattack on all those, at home or abroad, who decry U.S. efforts to wage the War on Terror, to create a new and better society in Iraq and to defend Israel. Victor Davis Hanson argues brilliantly. He is a fearsome adversary." — New York Post