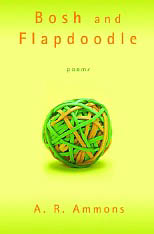 "A. R. Ammons died in February 2001 at the age of seventy-five, a member of the extraordinary generation of American poets born in the 1920s. Written during the end of 1996, this is Ammons's twenty-fifth book of poems and his first posthumous one. Readers of this prolific writer's earlier work will recognize both the form of BOSH AND FLAPDOODLE, a seasonal series that begins in late October and follows the dwindling of fall into the winter solstice, and its format, the colon-soldered, unrhymed couplets used earlier in GARBAGE and GLARE. They will also recognize the distinctly Ammonsian tones of voice, the witty mixing mixing of triviality and sublimity, grittiness and elegance, Germanic concreteness and Latinate abstraction. This book, along with Glare, its immediate predecessor, firmly establishes Ammons as the preeminent American poet of getting old. American literary history includes few poets who have stared so starkly and unswervingly at their own aging. Whitman has several underrated poems about old age, as does William Carlos Williams. Frost and Stevens have some as well. But no one has put his or her own aging on record as relentlessly as Ammons, and the results are not designed to soothe and mollify. Those who already love Ammons's work will find here an irreverently loose, flattened "prosetry" (his coinage), which compliments and in some ways completes his earlier lyric compressions and intensities; those who come to this book unfamiliar with Ammons's work should make sure to read some of his poems written before 1990 before they draw any large conclusions. " — Stephen Cushman, The Virginia Quarterly Review

"You can be charmed by Ammons' self-effacement, but don't be fooled by it. His poems, framed in ordinary language and couched in stately couplets, are twisty and testy, bawdy and funny." — Time magazine

"In 1996, two years before the medical setback that effectively put an end to his writing career, the late A. R. Ammons generated the burst of inspiration that sustained the composition of BOSH AND FLAPDOODLE in six intense weeks. Don't be misled by the ironic self-mockery in the title. This is a wonderful book by a major American poet — full of wisdom, pathos, humor, mortal longings and intimations of immortality. BOSH AND FLAPDOODLE will please Archie's longtime fans and will attract lots of new ones. I wish he were around to enjoy the applause." — David Lehman

"By the time of his death in 2001, Ammons had won almost every award a poet can win. A National Book Award, a Pulitzer and a MacArthur 'genius' grant (among others) honored his folksy yet intellectually rewarding verse, from sprawling apparently improvised, philosophically rich book-length poems to compact collections of witty and elegant lyric. Begun in 1996 and clearly intended as a unified book, this posthumous gathering splits the difference between Ammons's short and long modes, and retains the virtues of both.... Affecting.... As usual, Ammons keeps his comic effects close at hand.... And, as usual, Ammons's offhanded manner permits surprising meditations on the nature of art, emotion, the world and the self." — Publishers Weekly

"Writing in 1988, New Yorker critic Helen Vendler claimed that A. R. Ammons 'would be considered the foremost poet of the twentieth century.' Now that the 20th century is history, critics and academics will doubtless be compiling lists of its 'foremost poets' with gusto. And many a short list of more recent poets who should join the much-anthologized ranks of Ezra Pound and T.S. Eliot, Sylvia Plath and Wallace Stevens will feature Ammons.... This month...readers can get the pleasure of considering Ammons for themselves. BOSH AND FLAPDOODLE...[is written in] a style that tucks lanky-lined couplets into short, two-page lyrics. We hear quips from Ammons's wife; we get many frank musings on bodily functions (sex, eating and aging form a powerful, if cantankerous, triumvirate). The humor is bawdy, the tone primarily irreverent. It's as if, in these late-life works, Ammons's roots as a rural Southerner have reached full, twangy flourish.... Through his final book, Ammons proves an inventive, ever-evolving poet of the very nature of metamorphosis." — San Francisco Chronicle

"In A. R. Ammons's poems there is an offbeat, sideways, unpredictable radiance. They have a homespun glory. Ammons was an essentially American poet of what Emerson called 'fluxions and mobility,' who needed always to keep moving, bobbing and weaving, changing speeds (and tones), thinking on the fly, improvising — an adept of porcess, a proponent of motion, which he named 'the closest cousin to spirit.'... He enjoyed the role of grumpy old man, the poet as crank, and the mordant wit and ironic self-mockery of his title suggest that everything included is just meaningless talk. But nonsense has its deep usefulness, too, especially in the hands of this vernacular American Ovid, an irreverent master of metamorphosis.... Ammons was one of our supreme originals.... One of our most superb poets, a top bard, rising to a sublime grandeur, teaching us how to live." — The New York Times Book Review