A Year of Reading, Collecting, and Living with Books 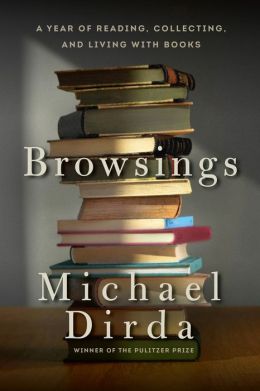 Michael Dirda has been hailed as "the best-read person in America" (The Paris Review) and "the best book critic in America" (The New York Observer). He was awarded a Pulitzer Prize for his reviews in The Washington Post as well as an Edgar from the Mystery Writers of America for his most recent book, On Conan Doyle. Dirda's Browsings collects fifty of his witty and wide-ranging reflections on literary journalism, book collecting, and the writers he loves. Reaching from the classics to the post-moderns, Dirda's topics are diverse: literary pets, the lost art of cursive writing, book inscriptions, the pleasures of science fiction conventions, author photographs, novelists in old age, writer's block, and much more. As admirers of his books will expect, there are fascinating annotated lists—of perfect book titles, great adventure novels, favorite words, essential books about books, and beloved children's classics, as well as the titles Dirda keeps by his bedside.  Browsings is a celebration of the reading life.

"Author and literary journalist Dirda presents a collection of light, conversational essays drawn from a year of writing on books and book collecting for the American Scholar. A weekly book columnist for the Washington Post and a regular contributor to numerous periodicals, the Pulitzer Prize recipient champions actual books as opposed to digital texts, for they are not mere home decor but a physical presence: reflections of who one is, 'of what you value and what you desire, of how much you know and how much more you'd like to know.' The author is happiest when enveloped by books, at home or in the many bookstores he trawls for hidden treasures. Browsings is as much about living with books, about serendipitous discovery, as about the boundless pleasures of reading. Dirda is, and encourages us to be, unabashedly promiscuous about books, exploring the realm of letters within and beyond our comfort zones, recognizing that this domain is greater than the bestseller lists, cultivating a taste for the quirky and arcane, and embracing the obscure as readily as the renowned. Though a literary polymath, the author disavows an analytical mind or the appellation 'critic' (despite much evidence to the contrary), insisting, 'I'm a bookman, an appreciator, a cheerleader for the old, the neglected, the marginalized, and the forgotten.' He does his best to exhume the buried tome, owning a particular bent (of late) toward the period 1865 to 1935, which gave birth to most of our modern genres. His antiquarian penchants extend not only to Victorian and Edwardian popular fiction, but to illustrative quotes from authors in all eras. Dirda's comradely essays are unfailingly informative and amusing, punctuated with poignant asides on the aging artist and paeans to great literary scholars. His almost single-minded passion, the exhilaration of a life in literature, glows on every page." — Kirkus Reviews (starred review)

"The columns collected in this volume make up a valentine to people who love reading and books. Washington Post book critic Dirda, a self-described ‘bookish literary journalist,’ channels his passion for reading and collecting books into ‘essays, meditations, and rants’ touching on a wide variety of literary topics: famous pets in fiction, Shelley’s poetry, Poe and Baudelaire, and the legacy of Dover Books, among others. Several pieces describe his excursions to used bookstores and library book sales, where acquisitions serve as madeleines, prompting reminiscences about fellow book collectors, forgotten classics, and underappreciated writers. Some of the essays stray far from the world of books—for example, a nightmarish vacation trip to a Colorado state park and a weeklong power blackout at the height of summer—but their literary allusions show how reading invariably seeps into all aspects of a book-lover’s life. Dirda is gently self-deprecating about his writing and enthusiasms, but his humility is contradicted by his huge roster of literary acquaintances, vast knowledge of both popular and literary fiction, and omnivorous tastes as a reader.... Fifty witty and wide-ranging reflections."" — Publishers Weekly

"Pulitzer Prize–winning critic and Washington Post book columnist Dirda offers another installment of his book musings.... Focused on the pleasures of books and reading, Dirda rejects academic didacticism in favor of breezy, conversational essays. Funny and obsessive, he meditates on his most beloved and underappreciated authors and genres—especially mystery, sf, and adventure—as well as his exploits at several book-themed conferences and conventions. He reminisces about his favorite bookshops, book dealers, and acquisitions, and laments again and again the lack of shelf space at his home in Silver Spring, MD. But beyond bibliophilism, this is a work about how reading stories builds relationships—between readers and writers and between readers and readers—and how these relationships change and shape one’s life. Dirda’s story is a testament to his origins in the steel town of Lorain, OH. Although Dirda recommends reading only two or three of his pieces at a time, his exuberance is infectious, and the book is hard to put down. Clearly this author recognizes that the most important quality of a book is the pleasure it gives." — Meagan Lacy, Library Journal

"Thank goodness for good old-fashioned readers like Dirda, who reminds us on each page of Browsings of the deep and soulful pleasures of a great book. [The essays] showcase Dirda's remarkable range of fancy and his indomitable and unabashed joyfulness in the memory of his own reading life. For all their intelligence, these essays are not pedantic. Rather, they have a sort of plain-spoken elegance about them…. Dirda shows that he's one of the most accessible critics still doing the good work." — Peter Geye, Minneapolis Star Tribune