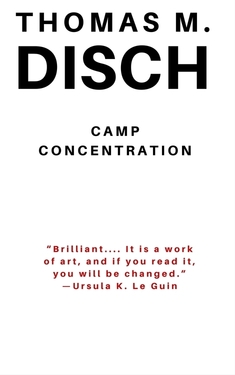 Louis Sacchetti is imprisoned for refusing to enlist in the war against Third World guerillas. In the underground Camp Archimedes, a military prison, he and other inmates are used in a perverse scientific experiment, and infected with a syphilis-like spirochete that raises intelligence to incredible heights while causing decay and death.  Sacchetti himself tells his tale: “A difficult feat to bring off,” as David Pringle has written, “but the degree to which Disch succeeds is nevertheless astonishing.”

"Now regarded as one of the greatest SF novels" — Elizabeth Hand, Salon

"Brilliant.... A work of imagination controlled by real moral responsibility; it is a work of art, and if you read it, you will be changed." — Ursula K. LeGuin

"Offbeat, thoughtful, and often startling — parts of it are shocking, some of it is beautiful.... A man fighting with courage and idealism against physical disintegration." — Publishers Weekly

"The sf New Wave was cresting on both sides of the Atlantic by the time this marvelous novel appeared. Thomas Michael Disch (born 1940) straddled the waters. He was an American who had chosen to live in England for a while…. His earlier works—The Genocides (1965), Mankind Under the Leash (1966) and Echo Round His Bones (1967)—were sprightly, witty, sardonic; but it was with the outrageously titled Camp Concentration that he made his mark…. He has created a memorable work of art." — David Pringle, Science Fiction: The 100 Best Novels

"A commanding book—both daring and successfully so." — Brian Aldiss

"Certainly one of the three best speculative novels of the decade.... A singular point of excellence!" — Samuel R. Delany

"Disch is without doubt one of the really bright lights on the American SF scene." — Fantasy & Science Fiction