Landmark Battles in the Rise of Western Power 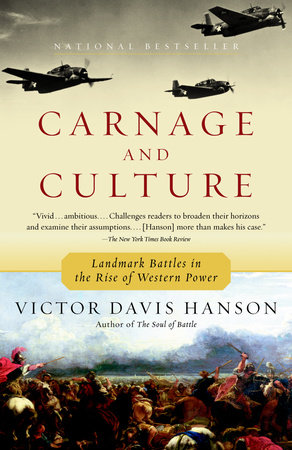 Through vivid descriptions of historic battles, Victor Davis Hanson hones in on the cultural values that have enabled Western armies, often vastly outnumbered and far from home, to triumph over other civilizations. The author delineates the characteristics of successful armies — including individual initiative, superior organization and discipline, access to matchless weapons, and tactical adaptation and flexibility. Then he shows how these characteristics develop and flourish as a result of such traditional Western institutions and ideals as consensual government, free inquiry and innovative enterprise, rationalism, and the value placed on freedom and individualism. A graphic retelling of military battles from the Greek's victory at Salamis to the Vietnam War, CARNAGE AND CULTURE is also an important contribution to our understanding of the rise of Western power.

"Victor Davis Hanson is courting controversy once again with another highly readable, lucid work. Together with John Keegan, he is our most interesting historian of war. The reader may or may not share his central thesis about the reason for Western dominance in warfare, but one comes away from an encounter with this book challenged, energized, and eager to read more." — Jean Bethke Elshtain, Laura Spelman Rockefeller Professor of Social and Political Ethics, The University of Chicago, and author of WOMEN AND WAR

"Those who read his book published five years ago, FIELDS WITHOUT DREAMS, a painful lament and angry analysis of the fading agrarian idea in the West as examined in the travails of his sixth-generation family farm in California, will be familiar with Hanson's take-no-prisoners intellectual style and refusal to give hostages to fashion.... An insightful journey...[CARNAGE AND CULTURE] is an audacious historiographic thesis.... Hanson writes with the felicity that makes his narrative a pleasure.... Stimulating." — Woody West, Policy Review

"This robust and stimulating history...is especially relevant after the terrible events of September 11.... Hanson builds his argument around detailed accounts of nine great battles, starting with Salamis in 480 BC and ending with the 1968 Tet Offensive." — Financial Times

"This provocative book is likely to engender controversy." — Booklist

"This is a brash book, purveying a refreshing brand of intellectual and political self-confidence.... At the heart of this big, combative and gutsy book there is an argument which is powerful and convincing." — Sunday Telegraph (London)

"I believe I invented the concept of 'military culture'. Victor Davis Hanson, in his new book, implies as much. There is, however, no copyright on ideas and I did not patent it. Nevertheless, it was a manifestation at Sandhurst of a military culture, different from though connected with that of a civil society, which first alerted me to a missing dimension in military history 30 years ago. I have spent my life trying to give it concrete form. Professor Hanson also shares my view. We have never met, but we have corresponded frequently. He is becoming one of the best-known historians in America. His first non-academic book [was] brilliant and original.... His latest book can only enhance his reputation among readers with common sense.... Timely." — John Keegan, The Daily Telegraph (London)

"Allow me to begin by thanking you for the chance to read in advance of publication one of the best, most stimulating works of military history to be published in the past decade. Hanson challenges current academic fashion by insisting that wars are the sum of battles. He goes on to make a convincing case that the West's enduring global dominance reflects a uniquely Western military prowess. The Western way of war depends on neither technology, intelligence, nor morality. It is instead a consequence of institutionalized political, economic, and intellectual freedom, guaranteed by constitutions and laws. Western culture is hegemonic because in Western armed forces, individuals stand together by choice to conquer or die." — D. E. Showalter, Professor of History, Colorado College

"A provocative look at occidental aggression...precise, forceful writing, sets it apart from the season's secondary-sourced, battle-baseed military histories. Hanson's direct, literate style and his evenhandedness should appeal to the liberalist middle of the left and right alike. By isolating the ingredients of military success via elaborate examples, the book can potentially draw on two separate military-history readerships: those looking for theory and those looking for action." — Publishers Weekly

"A fascinating study of the way Western values have translated into Western military victories against non-Western cultures. Hanson meticulously analyzes nine epic battles, from Salamis in 480 B.C. to Tet in 1968. In each account he shows how Western liberalism influenced military tactics and brought Western armies crucial victories against conservative or despotic foes.... [Readers] will find Hanson's point insurmountable.... A matchless study that combines the brutal facts of war with persuasive findings." — Kirkus Reviews

"In this new and typically provocative history of Western warfare from the ancient Greeks to the present day, Victor Davis Hanson makes abundantly clear how central were the ideas of shock battle and mass killing to the theory and practice of ancient Greek citizenship and culture. Yet he sees the Greek military tradition as the foundation-stone of the West's distinctive propensity for self-criticism, civilian audit and popular critique of military operations. That in turn is part of the longer Western tradition of personal and civic freedom, government by mutual consent, and individualism. Formidably learned, broadly comparitivist, Hanson ranges from the battle of Salamis in 480 B.C.E. to the Tet Offensive of the Vietnam War era. There is not a dull page here. He leaves us pondering this awkward dilemma of the modern age: the only successful response to a lethal Western army is...another lethal Western army." — Paul Cartledge, Professor of History, Clare College