Wolcott Gibbs, E. B. White, James Thurber, and the Golden Age of The New Yorker 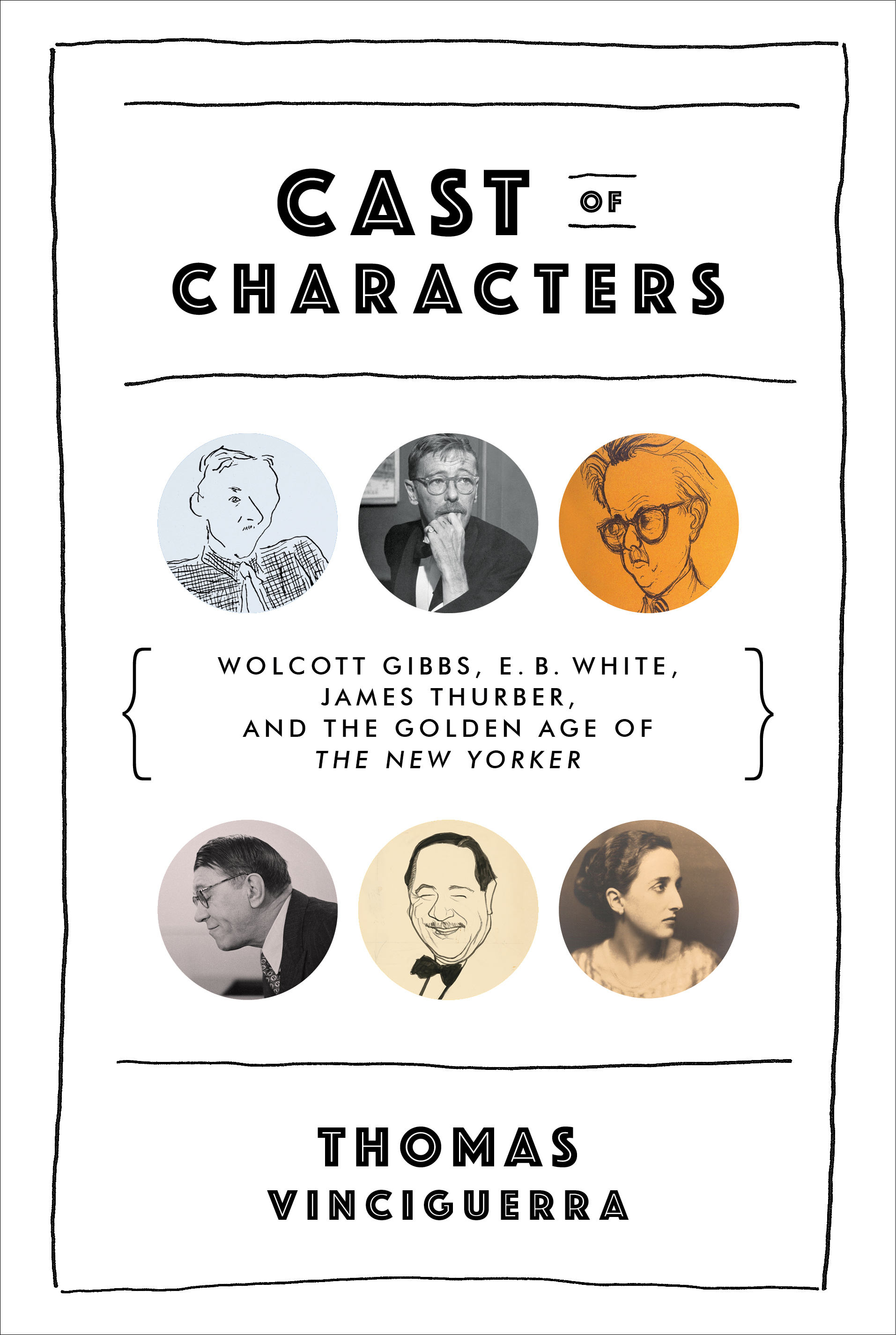 From its birth in 1925 to the present day, The New Yorker has been the country’s most prestigious, entertaining, and informative general-interest periodical. In Cast of Characters, Thomas Vinciguerra revisits the early years of that creative cauldron. At the heart of the narrative is the largely forgotten life of Wolcott Gibbs, the magazine’s theater critic and all-around wit, author of an infamous 1936 parody of Time magazine. Around him swirled a legendary roster of names, E. B. and Katharine White, James Thurber, Charles Addams, Peter Arno, and John O’Hara among them. Their stories—along with those of equally colorful but overlooked figures like managing editor St. Clair McKelway, head fact-checker Frederick Packard, and the flamboyant film reviewer John Mosher—are told here. Drawing on extensive interviews, multiple manuscript collections, and myriad secondary sources, Cast of Characters may be the most revealing book yet about the unique personalities who built what founding editor Harold Ross called not a magazine but a “movement.”

A "Top 10" Publishers Weekly selection: "A compelling narrative stocked with plenty of well-remembered names (James Thurber, E. B. White), with a starring role for a relatively forgotten one.... A revealing look at the writers who built the magazine, centering on the largely forgotten Gibbs, the New Yorker's theater critic and all-around wit."—Fall 2015 Announcements Issue

"Fresh and invigorating. Begun as a biography of theater critic and longtime staff writer Wolcott Gibbs, Thomas Vinciguerra’s account covers the lives and work of Gibbs and colleagues James Thurber, E.B. White, John O’Hara, St. Clair McKelway, Charles Addams, and others—led by Harold Ross and Katharine White—as they created the magazine…. Where Vinciguerra excels is in figuring out how the dysfunctional workplace of the early New Yorker turned out such sparkling, electric prose. It all seems very glamorous to us now, but the author doesn’t shy from the uglier side of New Yorker history—alcoholism, sexual indiscretion, petty feuds…. It’s to Vinciguerra’s great credit that he manages to avoid both condescension and hagiography in writing about the flawed, brilliant people behind it." — Kate Tuttle, The Boston Globe

"An exuberant reunion of the magazine's eccentric inner circle…. Likening his approach to Eileen Simpson's Poets in Their Youth, Mr. Vinciguerra (whose cast of characters is simply more fun) elegantly conjures an evocative group dynamic embellished by figures like Harold Ross, Katharine White, Dorothy Parker, St. Clair McKelway and, of course, the underappreciated Gibbs. Gibbs's theater reviews were composed, The New York Herald Tribune recalled, 'in the manner of a little boy plucking the wings off a nasty insect.' He was equally hard on fellow writers. 'An author is either competent or horrible in the beginning,' Gibbs wrote, 'and he stays that way to the end of his days, unless certain pressures force him into other and shadier occupations, like alcohol or television.' As for editors, Gibbs advised, 'Try to preserve an author's style if he is an author and has a style.' Mr. Vinciguerra is, and does." — Sam Roberts, The New York Times

"Mr. Vinciguerra is an artful stage manager of his material; at times, one has a stirring sense of eavesdropping on intimate, literate, testy conversations. As a writer, he has a knack for understatement, an eye for the odd and telling fact, and a fondness for precise and slightly old-fashioned diction…. In other words, his writing would not be out of place in a New Yorker issue of, say, 1938. I hasten to add that that is a high compliment." — Ben Yagoda, The Wall Street Journal

"Cast of Characters is irresistible. Thomas Vinciguerra casts a wide net over the annals of The New Yorker's golden age and hauls in a bounty of anecdote, eloquence and backstory about the big fish and small fry who first made the magazine great. The book is banquet of information about the good writing and bad manners of the eccentric crew who made a myth both of themselves and the journal they made famous. Vinciguerra writes a sharp, crisp sentence, and he tells his story with brio. To paraphrase one of the magazine's stellar wits, S.J. Perelman, Cast of Characters sent the salmon in me going upstream." — John Lahr

"I wanted to bestow an encomium on Cast of Characters but the Bible beat me to it. ‘There were giants in the earth in those days... mighty men which were of old, men (and, as Thomas Vinciguerra points out, women) of renown.’ Vinciguerra takes us back to those days and lets us visit with the giants and see them at work, home, and play. It's a beautiful book and a sad book, as the flood of time and modernity rises before the Cast of Character can walk in pairs to the ark." — P.J. O'Rourke

"Vinciguerra’s writing has a way of bringing these characters to sparkling life; using quotes, anecdotes, and descriptive prose, he gives great nods to such sometimes-background figures as John Chapin Mosher, the dedicated denier of unsolicited manuscripts; James Thurber, whose contributions ranged from witty observations to art; and countless others who came and went but who left a mark, which Vinciguerra ferrets out and celebrates. Founding editor Harold Ross bristles brightly in these pages; Katharine White gets her due for her never-ending contributions. New Yorker readers are a dedicated lot and will snap this ‘golden age’ volume up, adding it to their view of the vibrant, eccentric, shape-shifting rag that touches them, and the world, with its words and pictures." — Eloise Kinney, Booklist

"A fresh view of the much-chronicled magazine, focused on the three writer/editors who, with founder Harold Ross, shaped its sophisticated stance in the years between the world wars. ‘Elegant arrogance’ is how The Week magazine founding editor Vinciguerra aptly describes the magazine's rigorous distaste for what editor-in-chief Ross called ‘bunk.’… This book is admiring without airbrushing the magazine's limitations and eccentricities. Wolcott Gibbs, feared drama critic and peerless parodist, was a depressive misanthrope who seemed rarely to have a happy moment. James Thurber, whose editing gave ‘Talk of the Town’ its crisp, smart tone, was a misogynist far nastier than his cartoons chronicling the war between the sexes. E.B. White, who dominated the ‘Comment’ section with his urbane yet down-to-earth pieces, was the least neurotic (and least alcoholic) of the triumvirate, but he was devoted to Gibbs and Thurber and vice versa. With the micromanaging Ross looking over their shoulders, they gave the magazine its voice and its panache, nicely conveyed by Vinciguerra in judicious excerpts from emblematic articles and juicy anecdotes involving many talented, turbulent contributors…. Ably captures the antic spirit of The New Yorker's first heyday." — Kirkus Reviews

"Vinciguerra's sprawling history of The New Yorker’s early luminaries captures the eccentricities and idiosyncrasies of its editors and writers—Wolcott Gibbs, E.B. White, and James Thurber, as well as founder Harold Ross and various other 'fabled oddballs.' Created to provide 'smart, urbane journalism,' the magazine quickly became noted for its sharp editing, rigorous fact-checking, and witty cartoons. Ross and Gibbs, the New Yorker's theater critic, were chiefly responsible for its success, as Vinciguerra painstakingly demonstrates. Anecdotes about fact-checking a story on Walter Winchell or a parody of Time demonstrate how reputations were built—and undone. The most amusing sections focus on the writers' wit, office romances, and sometimes outrageous behavior, such as Gibbs's penchant for getting drunk before attending plays he was reviewing. There are also more serious passages, such as a discussion of WWII's effect on the magazine's writers, editors, and content, culminating with the landmark publication of John Hersey's Hiroshima in its entirety in the New Yorker, before its appearance as a book. But in general, Vinciguerra's tone is more nostalgic than elegiac, and for that reason his book...will be embraced by faithful New Yorker readers." — Publishers Weekly