I Am Fire and Air 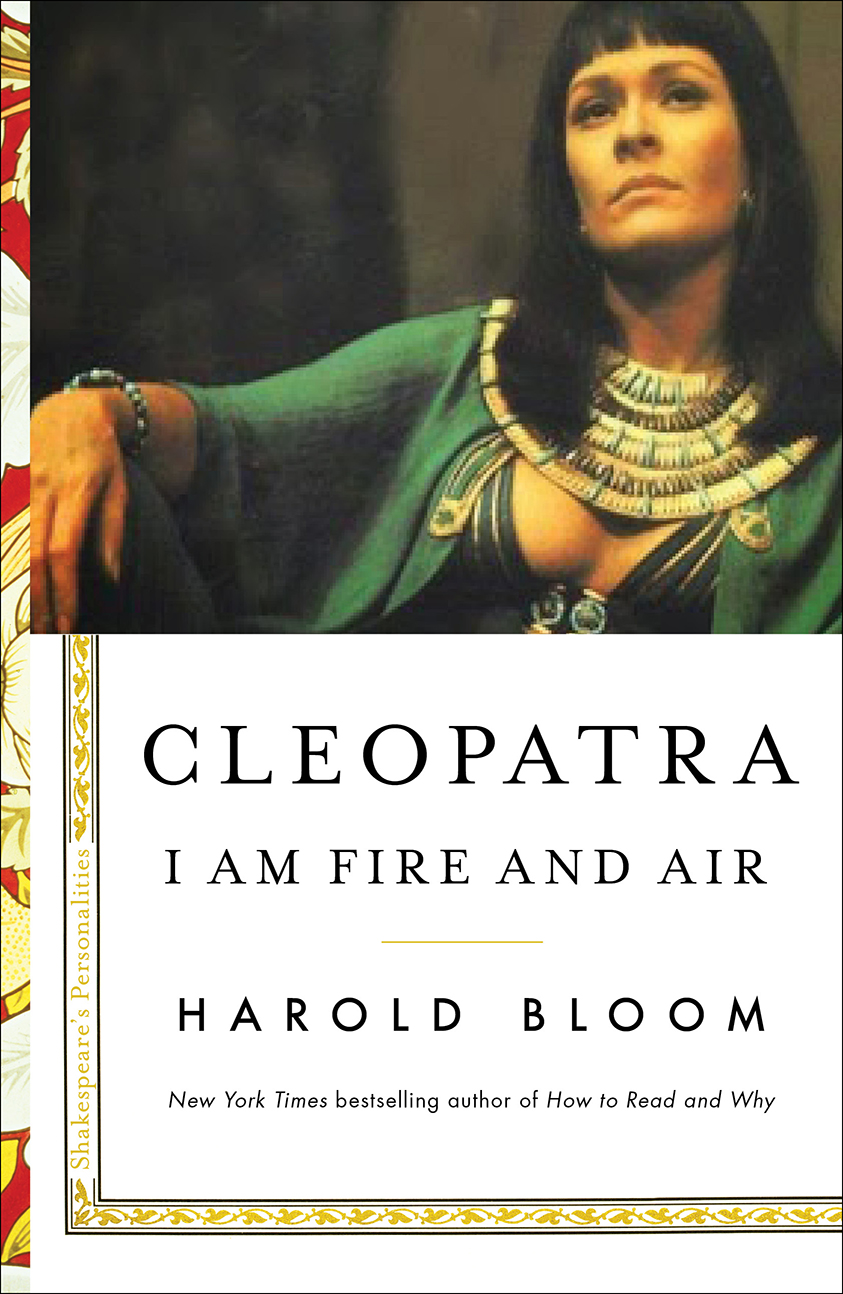 Cleopatra: I Am Fire and Air is the second in a sequence of five brief volumes, “Shakespeare’s Personalities.”  The first was Falstaff: Give Me Life, April 2017, and the others are Lear: The Great Image of Authority, April 2018; Iago: The Strategies of Evil, May 2018; Macbeth: A Dagger of the Mind, April 2019.

From one of the greatest Shakespeare scholars of our time, comes an intimate, wise, deeply compelling portrait of Cleopatra—one of the Bard’s most riveting and memorable female characters.

Cleopatra is one of the most famous women in history, and thanks to Shakespeare, one of the most intriguing personalities in literature. She is lover of Marc Antony, defender of Egypt, and, perhaps most enduringly, a champion of life. Cleopatra is supremely vexing, tragic, and complex. She has fascinated readers and audiences for centuries and has been played by the greatest actresses of their time, from Elizabeth Taylor to Vivien Leigh to Janet Suzman to Judi Dench.

An award-winning writer and beloved professor, Bloom writes about Cleopatra with wisdom, joy, exuberance, and compassion. He also explores his own personal relationship to the character: Just as we encounter one Anna Karenina or Jay Gatsby when we are in high school and college and another when we are adults, Bloom explains his shifting understanding of Cleopatra over the course of his own lifetime. The book becomes an extraordinarily moving argument for literature as a path to and a measure of our own humanity.

Bloom is mesmerizing in the classroom, wrestling with the often tragic choices Shakespeare’s characters make. With Cleopatra, he delivers exhilarating clarity and invites us to look at this character as a flawed human who might be living in our world. The result is an invaluable resource from our greatest literary critic.

"A wise inquiry into an ‘erotic and yet transcendent’ play. The uber-prolific Bloom now has his own book series: Shakespeare's Personalities. The first book explored Prince Hal's loyal friend, Falstaff, one of the Bard's most complex characters. Bloom continues to instruct and entertain with this in-depth look at the ‘most seductive woman in all of Shakespeare,’ the Egyptian queen who describes herself as ‘fire and air.’ Bloom fell in love with actress Janet Suzman's portrayal of Cleopatra in 1974, and her image ‘lingers’ with him still. In 1607, just one year after Macbeth premiered, Antony and Cleopatra was first performed. ‘Without the fierce sexuality that Cleopatra both embodies and stimulates in others,’ writes Bloom, ‘there would be no play.’ As usual, the author expects a lot of his readers as he meticulously provides a close reading, quoting extensively as he examines the text. For him, the play is ‘a brilliant kaleidoscope, a montage of shifting fortunes, places, personalities, excursions into the empyrean.’ Shakespeare's Cleopatra ‘beguiles and she devastates,’ and ‘no one else in Shakespeare is so metamorphic.’ She is ‘radiant’ at age 39 and instantly puts ‘Antony's heart in her purse.’ Bloom loves to ponder over certain words-e.g., Cleopatra's use of the ‘rich’ word ‘oblivion’ or the subtle ‘sexual implication’ of ‘Do.’ The ‘law’ of her personality—‘ebb, flow, ebb, return’—is about renewal and vitality, while Antony's is ‘ebb, flow, ebb, and do not return.’ Bloom often references other Shakespearean characters as he delves into what makes Cleopatra, Antony, Octavius Caesar, and other characters tick. His discussion of Shakespeare's ‘unique mastery at portraying the art of dying’ is especially fascinating. A masterfully perceptive reading of this seductive play's ‘endless wonders.’" — Kirkus Reviews

"Harold Bloom, one of the great literary critics of our time, Sterling Professor of the Humanities at Yale University, and author of Shakespeare: The Invention of the Human, has recently published a new work in his series on Shakespeare’s “personalities”, Cleopatra: I Am Fire and Air, making a compelling case for the Egyptian Queen as a paragon of feminine sexuality and ‘the most seductive woman in all of Shakespeare’…. Bloom comes at Cleopatra from the point of view of a man and an analyst of the Western literary tradition. She is, he argues, Shakespeare’s most ‘metamorphic’ woman. She radiates unpredictability. He notes that whereas the verb ‘become’ appears only once in Hamlet, variations on the word come up no less than 17 times in Antony and Cleopatra. And the play is, at some level, a dramatisation of becoming, instability, transitioning." — Andy Martin, The Independent (London)  (Read the full review)