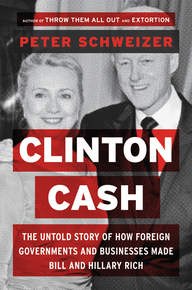 In 2000, Bill and Hillary Clinton owed millions of dollars in legal debt. Since then, they’ve earned over $130 million. Where did the money come from? Most people assume that the Clintons amassed their wealth through lucrative book deals and high-six figure fees for speaking gigs. Now, Peter Schweizer shows who is really behind those enormous payments.

In his New York Times bestselling books Extortion and Throw Them All Out, Schweizer detailed patterns of official corruption in Washington that led to congressional resignations and new ethics laws. In Clinton Cash, he follows the Clinton money trail, revealing the connection between their personal fortune, their “close personal friends,” the Clinton Foundation, foreign nations, and some of the highest ranks of government.

Schweizer reveals the Clinton’s troubling dealings in Kazakhstan, Colombia, Haiti, and other places at the “wild west” fringe of the global economy. In this blockbuster exposé, Schweizer merely presents the troubling facts he’s uncovered. Meticulously researched and scrupulously sourced, filled with headline-making revelations, Clinton Cash raises serious questions of judgment, of possible indebtedness to an array of foreign interests, and ultimately, of fitness for high public office.

"Clinton Cash was on the New York Times bestseller list for 12 weeks last year.... It tells the story of how Bill and Hillary Clinton made an estimated $229,319,855 between the time they left the White House in 2001 and 2014.... It’s a powerful story of money-grubbing and sleaze." — The Weekly Standard

"On any fair reading, the pattern of behavior that Schweizer has charged is corruption." — Lawrence Lessig, The Washington Post

"The most anticipated and feared book of a presidential cycle." — The New York Times

"Schweizer reports on the Clintons’ enormous graft and corruption…. There never has been a family like this in American history, not the Longs of Louisiana, not the scamps at Tammany Hall. The Clintons are a first, and with the help of journalists and then investigators they could be the last." — American Spectator

"Schweizer lays out compelling patterns in which the timing of policy decisions or international deals relative to donations, transcends coincidence—or at least, merits closer inspection. He narrates with crisp prose and illuminating detail." — Forbes

"The last time Bill and Hilary Clinton occupied the White House, it wasn’t easy to identify a guiding principle of U.S. foreign policy. But if Americans allow them to move back in, the former first couple will bring along a standard that is clear and consistent. Based on the evidence marshalled by Peter Schweizer, the new Clinton Doctrine seems to hold that wherever freedom and the rule of law are threatened, wherever corruption reigns and individual liberties are denied—there is money to be made. In such places, big windfalls can accrue to Clinton friends, who are nothing if not grateful and shower donations upon the Clinton Foundation and speaking fees upon the Clintons themselves. Almost every page of the fascinating Clinton Cash: The Untold Story of How and Why Foreign Governments and Businesses Helped Make Bill and Hillary Rich will be excruciating reading for partisans on both sides of the aisle. Mr. Schweizer, a former speechwriting consultant for George W. Bush, will have conservatives trying to imagine a Republican appearing to do so many favors for business allies and getting away with it. Liberals will wonder why they have to nominate someone whose friends and associates are getting rich in some of the world’s poorest countries. ‘The Clintons’ most lucrative transactions originate not in places like Germany or Great Britain, where business and politics are kept separate by stringent ethical rules and procedures,’ writes Mr. Schweizer, ‘but in despotic areas of the developing world where the rules are very different.’ He then takes us on a world tour of business magnates writing large checks to the Clintons or their foundation and receiving favorable treatment from various governmental bodies—including the U.S. Department of State where Mrs. Clinton served from 2009 to 2013. Where the particular government required to help a Clinton associate was of the less democratic variety, the favorable treatment was sometimes accompanied by Bill Clinton effusively praising the local strongman for his enlightened rule." — James Freeman, The Wall Street Journal  (Read the full review)