One Dad's Crash Course in Getting His Kid into College 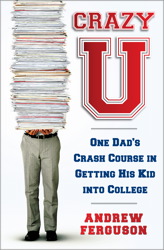 The cutthroat competition to get into the perfect college can drive students to the brink of madness and push their parents over the edge-and bury them in an avalanche of books that claim to hold the secret of success. Don't worry: Crazy U is not one of those books. It is instead a disarmingly candid and hilariously subversive chronicle of the journey that millions of parents and their children undertake each year-a journey through the surreal rituals of college admissions. It's a rollicking ride from the man Christopher Buckley has called "my all-time favorite writer."

Pummeled by peers, creeped out by counselors, and addled by advice books, Andrew Ferguson has come to believe that a single misstep could cost his son a shot at a happy and fulfilling future. He feels the pressure to get it right from the moment the first color brochures land in his mailbox, sent from colleges soliciting customers as though they were sailors come to port. First is a visit with the most sought-after, most expensive-and surely most intimidating-private college consultant in the nation. Then come the steps familiar to parents and their college-bound children, seen through a gimlet eye: a session with a distracted high school counselor, preparations for the SAT and an immersion in its mysteries, unhelpful help from essay coaches and admissions directors, endless campus tours, and finally, as spring arrives, the waiting, waiting, waiting for the envelope that bears news of the future.

Meanwhile, Ferguson passes on the tips he's picked up during their crash course. (Tip number 36: Don't apply for financial aid after midnight.) He provides a pocket history of higher education in America, recounts the college ranking wars, and casts light on the obscure and not-terribly-seemly world of higher-education marketing. And he dares to raise the question that no one (until now) has been able to answer: Why on earth does it all cost so much? Along the way, something unexpected begins to happen: a new relationship grows between father and son, built from humor, loyalty, and (yes) more than a little shared anxiety. For all its tips and trials, Crazy U is also a story about family. It turns out that the quiet boy who pretends not to be worried about college has lots to teach his father-about what matters in life, about trusting your instincts, about finding your own way.

"In Crazy U, Ferguson is at his dazzling best, using humor and narrative as portals to very serious subjects. The book is both a hilarious chronicle of his 18-month ordeal helping his not-always-cooperative son apply to college and a devastating exposé of the buying and selling of higher education in America." — Christina Hoff Sommers, The National Review

"The book is both a hilarious narrative and an incisive guide to the college admissions process. Ferguson has done his research, poring over mountains of published material and interviewing admissions officers, college coaches, academics and the guy behind the U.S. News & World Report college rankings…. Ferguson cuts through the muddle to elevate the discussion and deliver some powerful big-picture analysis. We learn the tortured history of the SAT and how it has become ‘the most passionately controversial element in the world of college admissions.’ We get a stark portrait of the one-way trend in college costs. Ferguson recalls that his annual tuition bill in 1978 at the small liberal-arts college he attended was $5,100. Adjusted for inflation, his price tag today would be $16,500 — far below the $40,000 his alma mater now charges. He combs over College Board handouts explaining how to pay for school and is repeatedly reminded that $143 billion in financial aid awaits students. He wonders for all of us: ‘Maybe it’s good news that $143 billion was available for aid. But isn’t it bad news that we need the $143 billion in the first place?’ It may seem strange to say that a book so full of heartache is a pleasure to read, but Ferguson’s storytelling is irresistible. You root for the obsessive, well-meaning dad and his lackadaisical son, and you laugh out loud over their college-app tug of war." — Stephen Levingston, The Washington Post Book World

"A laugh-until-your-ribs-squeak book." — George F. Will, The Washington Post

"It's hard to imagine a more amiable Virgil to guide us through this infernal process than Andrew Ferguson…. Mr. Ferguson reports his findings in 'Crazy U,' a book that I read—as the father of twin boys who are three years away from this dismal rite of passage—with horrified fascination…. He has succeeded in pulling the whole thing together through a single family's experience, enriched by much authorial homework…. 'Crazy U' is compulsively readable, unusually vivid—and thoroughly dispiriting, even though the author's son ends up doing just fine…. The most darkly humorous aspect of this often hilarious book is its depiction of an admissions process that corrupts everything it touches." — Daniel Akst, The Wall Street Journal

"The admissions process, as Andrew Ferguson puts it in his new book, 'Crazy U,' entangles not just our pocketbooks but everything else that, besides world peace and cocktail hour, matters to parents: ‘our vanities, our social ambitions and class insecurities, and most profoundly our love and hopes for our children.’ … He’s a valiant guide through this emotional territory. He’s got a big, beating heart, but he tucks it behind a dry prose style that owes a little bit to Mark Twain and Tom Wolfe — to name the first two white-suited writers who come to mind — and also to Dave Barry (who I suspect wears Dockers). He made me laugh early, and often.… 'Crazy U' is a chronicle of Mr. Ferguson’s attempts to help place his son, who is 16 when this mini-odyssey begins, in a decent college.… As this story moves forward, Mr. Ferguson makes short, shrewd detours into areas that include: the history of American education, how college guidebooks compile their rankings, the SAT tests and its critics, and the headache-making intricacies of college loans and financial aid. He talks to an expensive admissions guru who learns of his late start and fumbling progress and says, smiling: 'Oooooh. Baaaaaaad Daaaaaad.' These detours might have been, as they often are in memoirish surveys like this one, potted histories: breaded, deep-fried, dead on the palate. Mr. Ferguson’s taste buds are wide awake as he samples this material. His chapter on the SAT is a fine, provocative example…. Let me not overpraise 'Crazy U.' But its slimness and modesty are what’s winning about it. It’s a calm, amusing, low-key meditation on a subject that is anything but calm, amusing or low key. Many parents will grip it, I suspect, as if it were a cold compress they might apply to their fevered foreheads…. Bad dad? No way." — Dwight Garner, The New York Times

"Weekly Standard senior writer and Bloomberg columnist Ferguson may be one of our better-informed journalists, but when it came to getting his son into college, he was a bumbler like the rest of us. Here's his account, told with the understanding that one false step could have landed his son in…his third-choice college. An indisputably hot topic and anxiety producing, too, but Ferguson ("the Buster Keaton of the cultural essay," says Florence King) is giving this a welcome wry twist." — Library Journal

"It's Andy Ferguson so of course the book is meticulously researched, brilliantly written, and funny. But, by using his son's forced march through the anxiety and muck of picking and getting into a college, Andy has done a new thing. He employs poignancy as a tool of critical analysis. With this tool the stuffing is removed from the absurd, fraudulent, parasitic college admissions process and from the absurd, fraudulent and parasitic colleges themselves." — P. J. O'Rourke

"The joy of pride in one's child, the sadness of separation, this is part of leaving for college and in Ferguson's honest, deeply felt and truthfully recorded memoir all is overlaid with the monstrosity known as the college application process. Rumor, gossip, college hucksterism and internet bandits rule. Ferguson has written for all hair renting and stressed parents who have gone through the process. The book is hilarious, probing, maddening, moving and gets it right." — William J. Bennett

"Reading Andy Ferguson's prose is like sipping a Martini—even if you don't happen to drink Martinis. His adventures in the college application trenches are hilarious, eye-popping and instructive, a perfect match of author and subject. A+!" — Christopher Buckley

"Alas, by the time our almost-grown children arrive on campus, they will already have been hardened by exposure to the principles of Absurdistan. As a parent, I wish I had read Andrew Ferguson's guide to this world of bloviation, hypocrisy and bureaucracy before I was pitchforked into it myself." — Christopher Hitchens