The Complete Poems of A. R. Ammons 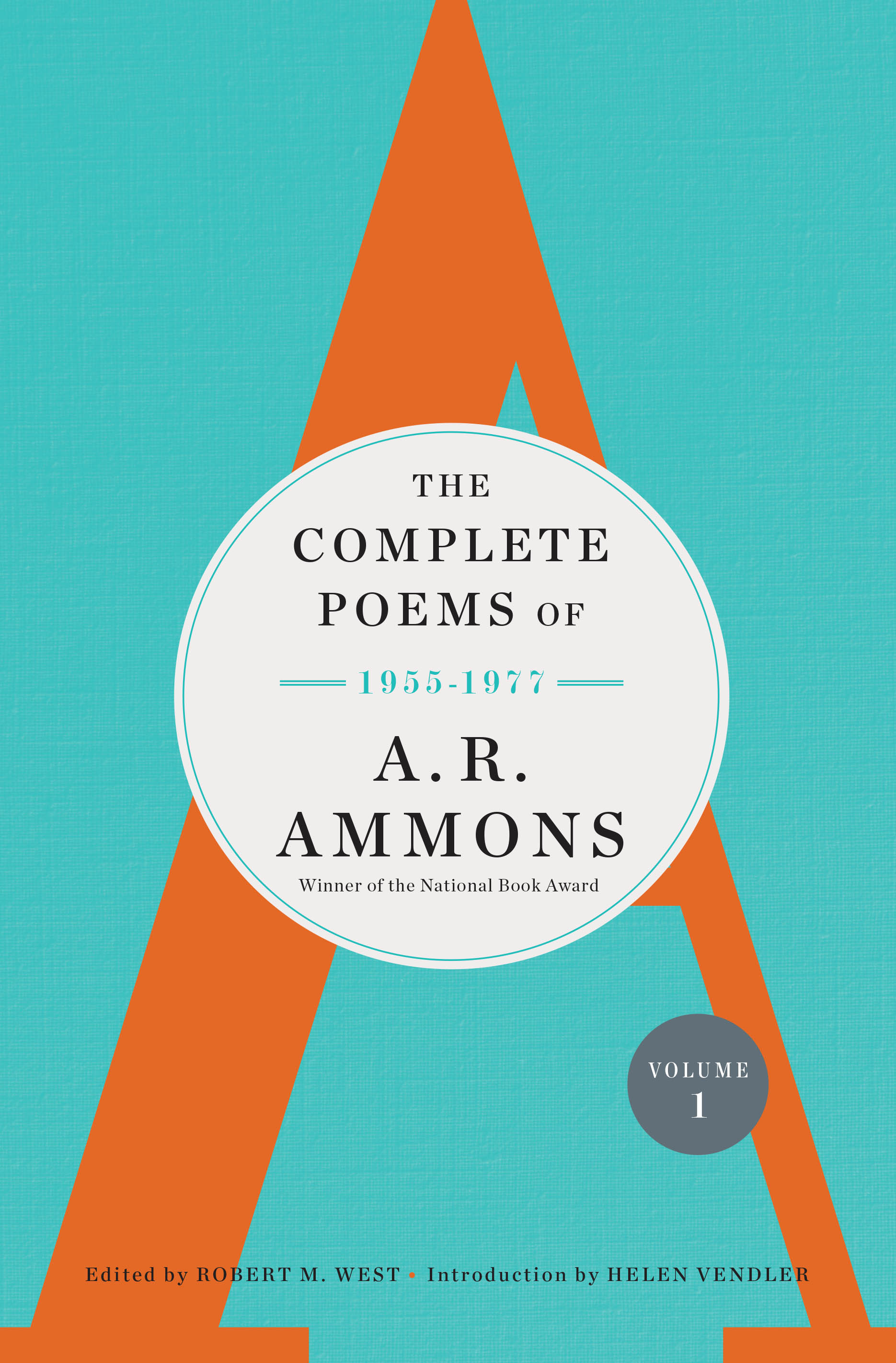 The Complete Poems of A. R. Ammons, Volume I presents the first half of Archie Randolph Ammons’s long career, including the complete texts of his three book-length poems from that period: the verse diary Tape for the Turn of the Year, the Bollingen Prize–winning Sphere: The Form of a Motion, and the daring kaleidoscope of The Snow Poems, which late in life Ammons said of all his long poems was his favorite.

Here are many of Ammons’s most widely celebrated lyrics and meditations, including “Corsons Inlet,” “Still,” “Gravelly Run,” and “The City Limits.” Others are more directly inspired by his roots in the rural south, among them “Nelly Myers,” “Silver,” and “Mule Song.” Here too are conversations with mountains (as in “Classic” and “Mountain Talk”) and exchanges with the wind (“The Wide Land” and “Mansion”), materialist explanations of reality (“Mechanism” and “Catalyst”) and prayers (such as the several poems titled “Hymn”). A poet drawn to theorizing about poetry, Ammons offers both sophisticated discussions of the art (as in “Poetics” and “Essay on Poetics”) and disarming assurance: “I believe in fun.”

Editor Robert M. West established the text of each poem after careful consideration of Ammons’s manuscripts and other materials. His endnotes detail the poems’ composition and publication histories, and also helpfully annotate references made within the poems.

Celebrated poetry critic Helen Vendler’s introduction both humanizes Ammons and traces the growth of his stature as a major poet.

Chosen the "#1 Best Poetry Book of 2017" by Publishers Weekly

"In his poems—all of which are collected in these two long-awaited, definitive volumes—we get to watch someone brilliant and deeply capacious thinking through everything he encounters…. He was a relentlessly prolific armchair philosopher, a metaphysician of the everyday, a thinker who never abandoned his grade school love of the sciences and who made a permanent place for biology, physics and mathematics in the highest orders of American poetry. He was a successor, as the critic Harold Bloom famously noted, to Walt Whitman, Wallace Stevens, William Carlos Williams and Robert Frost…. For an undeniably major poet, Ammons was unusually funny, slippery and tricky…. His great poems—and some of them are truly among the greatest of the second half of the 20th century—manage to take the most cosmic and abstract long view and simultaneously observe the world at hand with startling specificity…. Like Frost, Ammons believes poetry can offer, through, in and by means of close and deep attention to words themselves, ‘a momentary stay against confusion’. These two mammoth volumes offer more of these moments than one can count." — Craig Morgan Teicher, Los Angeles Times  (Read the full review)

"The publication of The Complete Poems of A.R. Ammons is one of the biggest literary events of this year. Edited by Robert M. West, the 966 poems in this two-volume set begin with the collection Ommateum with Doxology, which Ammons self-published in 1955, and end with Bosh and Flapdoodle, published posthumously in 2005. Despite his multiple awards — including two National Book Awards — Ammons, who died in 2001, never achieved the renown he deserved, in part because he was uncomfortable reading his work in public. ‘I show off but not up,’ he once told critic Helen Vendler. The Complete Poems arranged chronologically, shows the tremendous range and innovation that, despite Ammons’s stage fright, helped establish him as one of America’s most original and important 20th-century poets. The work shows how Ammons consistently addressed philosophical questions by exploring humanity’s connection to nature. ‘No use to linger over beauty or simple effect:’ he notes in the expansive poem Garbage, ‘this is just a poem with a job to do: and that/ is to declare: however roundabout, sideways,/ or meanderingly (or in those ways) the perfect/ scientific and materialistic notion of the/ spindle of energy.’ As Vendler wisely points out in her introduction, ‘Ammons’s poems, first to last, are...a master inventory of the vicissitudes of human life, worked by genius into memorable shapes.’" — Elizabeth Lund, The Washington Post  (Read the full review)

"It’s a rocking double-wide mobile home of electric American verse…. Ammons had a friendly, open, searching style, one that sometimes veered toward the metaphysical but tended to find its grounding in the crunch of wit or a small, superb insight.... Ammons carries you along because as he vamps, like a musician, there’s a sense of drama, of his mind expanding and contracting. He will hit his groove and deliver a string of intensities. Then he will pull back because the beauty is too much…. His charm was so great you only slowly realize how much loneliness and anger and depression swam behind his verse…. Ammons hoped that the point in his poetry would be ‘delivered below / the level of argument, straight into the fat / of feeling.’ He got there more than most poets of his time. Ammons could be high-minded but he had few pretentious bones in his body. He told us what he wanted and, like Babe Ruth pointing at the bleachers, he delivered." — Dwight Garner, The New York Times  (Read the full review)

"Expertly and enthusiastically edited by Robert West and nearly a decade in the making, Ammons's Complete Poems honors the poet impressively and, with West's extensive notes, places his body of work in contexts that would otherwise be difficult to find, thus expanding his influence into our new century. West's meticulous editing makes sure the poems are as the poet wished them to be presented; the notes add essential and interesting bibliographic information on their original and subsequent publication…. Having all 1,093 of Ammons's previously published poems (127 of them never collected) bound together—though it takes two fat volumes to hold them, nearly 7 lbs. of poetry—should, of course, bolster Ammons's reputation among readers…. It's partly how the poet comes to life so completely in this collection—how he grows—that reaching the end brings on a sadness that we can't have more to read, so that we might linger a little while longer in Archie's presence." — Alex Albright, Tar River Poetry  (Read the full review)

"Showcasing the talent and creativity that earned Ammons multiple honors, including two National Book Awards and the Wallace Stevens Award, this exhaustive and important set gathers the work of Archie Randolph Ammons (1926–2001), one of America’s most significant poets." — Neal Wyatt, Library Journal

"Though Ammons viewed his poems as ‘criss-cross trellises in typhoon,’ mere ‘bits, strings’ that withstand the punishing weather of his imagination, here they are, collected in two large volumes by Norton, edited by Robert M. West, with an introduction by Helen Vendler. It is odd to hold these weighty objects, whose contents refer over and over again to the importance of what Ammons calls ‘gossamer distinctions,’ celebrating everything fleeting and gauzy. The same could be said for Emily Dickinson’s body of work, uncannily heavy with the quicksilver actions of her mind. But the majesty of Ammons’s achievement, scattered previously in more than twenty volumes, some out of print for decades, can now be recognized." — Dan Chiasson, The New Yorker  (Read the full review)

"I got these books for Christmas, and I am still smiling. If you don't know Archie Randolph Ammons—who won the National Book Award (twice) and wrote some of his best-known poetry while living at the Jersey Shore—buy Volume 1 and see why you should…. He is among the most successful of all poets in making science—the mind-set, plus the sometimes heady, electrifyingly precise language—part of poetry." — John Timpane, Philadelphia Inquirer

"Reflections on the great American twentieth-century poet A. R. Ammons: The two volumes that make up The Complete Poems of A. R. Ammons, which include all collected and previously uncollected poems (though not any of the unpublished drafts and fragments), run to more than 2,000 pages. Handsomely produced by Norton and meticulously edited by Robert M. West." — Marjorie Perloff, The Times Literary Supplement  (Read the full review)

"The volumes have been superbly edited by Robert West." — Matthew Bevis, London Review of Books