9/11 and the Future of American National Security 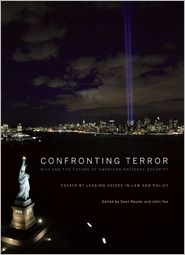 After the September 11, 2001 attacks, the United States went to war.  With thousands of Americans killed, billions of dollars in damage, and aggressive military and security measures in response, we are still living with the war a decade later.  A change of presidential administration has not dulled controversy over the most fundamental objectives, strategies, and tactics of the war, or whether it is even a war at all.

Confronting Terror sets the stage for a reasoned and robust discussion of the future with a collection of new essays examining the meaning of 9/11 and the law and policy of the war on terrorism. The contributors include principled supporters and critics of the war on terrorism alike, from former Attorneys General John Ashcroft and Michael Mukasey to Alan Dershowitz and former long-time president of the ACLU Nadine Strossen.

The book presents stark differences of opinion on issues, such as the president’s authority to detain, the assertion of state secrets, the limits of surveillance, the use of unmanned drones and targeted killing, the treatment and interrogation of detainees, the Patriot Act, and the peculiar nature of our foe. More surprising, perhaps, are the areas of agreement, particularly the fact that the policies of two very different presidents are remarkably the same. In surveying these views, Yoo and Reuter hope to clarify the debate, both for our society and for those responsible for waging the war.