A History of Executive Power from George Washington to George W. Bush 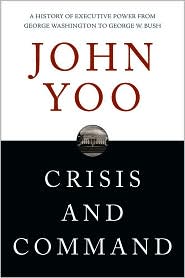 An American President faces war and finds himself hamstrung by a Congress that will not act. To protect national security, he invokes his powers as Commander-in-Chief and orders actions that seem to violate laws enacted by Congress. He is excoriated for usurping dictatorial powers, placing himself above the law, and threatening to “breakdown constitutional safeguards.”

One could be forgiven for thinking that the above describes former President George W. Bush. Yet these particular attacks on presidential power were leveled against Franklin D. Roosevelt. They could just as well describe similar attacks leveled against George Washington, Thomas Jefferson, Andrew Jackson, Abraham Lincoln and a number of other presidents challenged with leading the nation through times of national crisis.

However bitter, complex, and urgent today’s controversies over executive power may be, John Yoo reminds us they are nothing new. In Crisis and Command, he explores our history, and through shrewd and lucid analysis, he shows how the bold decisions made by Washington, Jefferson, Jackson, Lincoln, and FDR not only changed history but transformed the role of the American president. The link between the vigorous exercise of executive power and presidential greatness, Yoo argues, is both significant and misunderstood. He makes the case that the founding fathers deliberately left the Constitution vague on the limits of presidential authority, trusting future history to demonstrate the proper limits of power to the executive office.

"John Yoo was a significant participant in the Bush administration's war on terrorism. As a deputy assistant attorney general in the Justice Department's Office of Legal Counsel, he wrote many of the legal briefs on which the Bush administration relied, including, famously, a number of memos relating to the treatment of detainees at Guantanamo Bay. Since returning to his academic position at the University of California at Berkeley law school, he has published three books. One dealt with the Constitution's allocation of authority over war and foreign relations among the branches of government, with a strong emphasis on the founding fathers' vision. The second was a memoir of his involvement in the war on terror. Now comes 'Crisis and Command,' which is a vigorously argued and, in some ways, deeply unsettling account of the necessary superiority of the presidency in our constitutional scheme.... Given Yoo's strong conservatism, it would be easy for liberals to dismiss 'Crisis and Command' as one more venture in a hackneyed debate. That would be a big mistake. True to form, Yoo does use his two brief final chapters to defend the George W. Bush legacy and drive progressives nuts with the idea that President Obama has some strangely reactionary ideas struggling to control his brain. But the heart of the book is the highly favorable treatment that Yoo extends to five great presidents—all of whom should rank high on any liberal's list of admirable leaders: Washington, Jefferson, Jackson, Lincoln and Franklin Roosevelt—followed by a broad survey of the Cold War presidents from Truman through Reagan. This is a deeply serious history of the presidency, sometimes selective in its emphasis, but always provocative and thoughtful. The recurring theme is how well the republic was served by the initiatives these leaders took.... The presidents we admire possessed a pronounced confidence in their authority. They were innovators and risk-takers, with an entire branch of government to command. They either faced challenges they could not afford to avoid or raised issues they insisted the nation must confront—and their office alone had the capacity to focus the nation's attention as a result. They drove American politics in ways that no congressional statesman or jurist—not even John Marshall or Earl Warren—could ever equal.... Yet what Yoo forces us to confront is the reality of all the striking advantages the executive enjoys. It is, in its way, an enticing portrait of presidential power—and a disturbing one." — Jack Rakove, The Washington Post

"John Yoo has set out to explain what has happened to presidential power since its beginnings in 1789. Yoo is a professor of law at Berkeley and the author of some controversial memos as a member of the Office of Legal Counsel in the Department of Justice in the administration of George W. Bush. Since Yoo’s robust view of presidential power is well-known, any history of the presidency written by him might initially seem suspect and agenda driven. He realizes only too well that his book is apt to be read 'as a brief for the Bush administration’s exercise of executive authority in the war on terrorism.' But if it is a brief for an expansive understanding of presidential authority, it is a remarkably persuasive one. Although Yoo has mastered an extraordinary number of historical and political science studies of the American presidency, his book is not a full-blown account of the presidency from its beginnings to the present, including all its personal and political aspects; that would make for a far bigger and different book. Instead, Yoo’s account is a highly focused and nicely compressed constitutional history of the office." — Gordon S. Wood, The National Interest

"A rich subtle, and thoughtful work—one that will benefit those seeking to understand the executive’s uneasy place in the constitutional order." — Hillel Ofek, Cambridge Review of International Affairs

"In this contentious study, Berkeley law prof and former Justice Department official Yoo reprises the brief for expansive presidential power that made him one of the Bush administration's most controversial aides. He focuses on a handful of presidents—Washington, Jefferson, Jackson, Lincoln, and FDR—who, he argues, extended executive authority in novel ways to surmount crises without letting an inherently slow, disorganized, corrupt, and pusillanimous Congress get in the way. In his account, these great presidents started wars without congressional authorization, suspended habeas corpus, detained security risks, secretly wiretapped, remade the economy, and unilaterally interpreted the Constitution. All of this, he insists, comports with the Constitution's grant of broad, ambiguous powers to a unitary executive and, usually, with congressional consensus and public well-being. His analysis culminates in a defense of Bush administration policies on warrantless wiretapping, 'coercive interrogation,' enemy combatants, and Iraq, and a denunciation of Obama's deviations from them. Yoo's chronicle cogently fits in Bush's initiatives with previous presidential arrogations of power. But his tacit premise that the open-ended, ill-defined 'war on terror' compares to previous crises like the Civil War and requires similarly drastic responses will be strongly disputed by civil libertarians." — Publishers Weekly