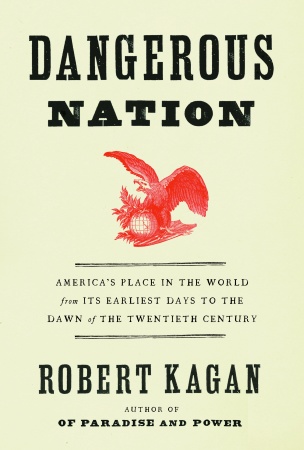 America has always been internationalist and evangelistic about its seminal version of democracy. This is the first in a projected two volume history of America's conduct of foreign policy, which began, in the 16th century, in expansionism directed at native Americans. Kagan, a brilliant thinker, scrupulous historian, and incisive writer, shows how America has viewed itself and been viewed by the rest of the world—as destined for greatness and world leadership from its inception. Furthermore, America has invariably been seen through its history as the leading role model worldwide for human rights, the rule of reason, and democracy. Unsurprisingly, America has pursued its foreign policy accordingly, up to the present day.

"One of America's great myths, says Kagan, is that the U.S. has always been isolationist, only rarely flexing its muscles beyond its borders. Not so: in the first half of a two-volume study of American foreign policy,Washington Post columnist and bestselling author Kagan (OF PARADISE AND POWER ) argues that even in the colonial era Americans restlessly pushed westward. At every turn, Kagan shows how a policy of aggressive expansion was inextricably linked with liberal democracy. Political leaders of the early republic developed expansionist policies in part because they worried that if they didn't respond to their clamoring constituents—farmers who wanted access to western land, for example—the people might rebel or secede. Also provocative is Kagan's reading of the Civil War as America's ‘first experiment in ideological conquest’ and nation building in conquered territory. He then follows American expansion through the 19th century, as the U.S. increased its dominance in the western hemisphere and sought, in President Garfield's phrase, to become ‘the arbiter’ of the Pacific. Kagan may overstate the extent to which contemporary Americans imagine U.S. history to be thoroughly isolationist; it's a straw man that this powerfully persuasive, sophisticated book hardly needs." — Publishers Weekly (starred review)

"An outstanding reading experience. Kagan convincingly challenges the received wisdom that 19th-century America was essentially isolationist by showing that from its birth this nation aggressively expanded its frontiers across the entire continent, ousting the British, Spanish, French, Russians, and Mexicans from what are now the 50 states. Today, when America is widely scorned abroad, it is brow-furrowing to read of the same fears of America in the past. Then, it was our daring to be (in John Winthrop's words) a shining city on a hill that could disturb the authoritarian regimes of Old Europe. Plus ça change. Massively researched, well argued, thought-provoking, and constantly surprising, this book should be purchased by all public libraries; its scholarly qualities also make it an essential addition to academic collections on American and diplomatic history." — Library Journal

"Robert Kagan rose to prominence in 2003 with OF PARADISE AND POWER, a bestseller about America and Europe, which began: ‘It is time to stop pretending that Europeans and Americans share a common view of the world, or even that they occupy the same world.’ Now he has returned to the stage with DANGEROUS NATION, the first of a projected two-volume history of American foreign policy…. DANGEROUS NATION is a first-rate work of history, based on prodigious reading and enlivened by a powerful prose style. It also casts a bright light on America's role in the world—and on its manifold tensions with other countries." — The Economist

"Its systematic dismantling of accepted dogmas is refreshingly provocative…. Kagan again assumes the stance of enfant terrible, assailing the keepers of the conventional wisdom…. DANGEROUS NATION draws from a deep well of historical scholarship about American foreign relations, but it sharply rejects the traditional account…. Instead, Kagan mounts a frontal assault on ‘the pervasive myth of America as isolationist and passive until provoked… This book is an attempt to tell a different story that is more about expansion and ambition, idealistic as well as materialistic, than about isolationist exemplars and cities upon hills.’" — David M. Kennedy, The Washington Post Book World