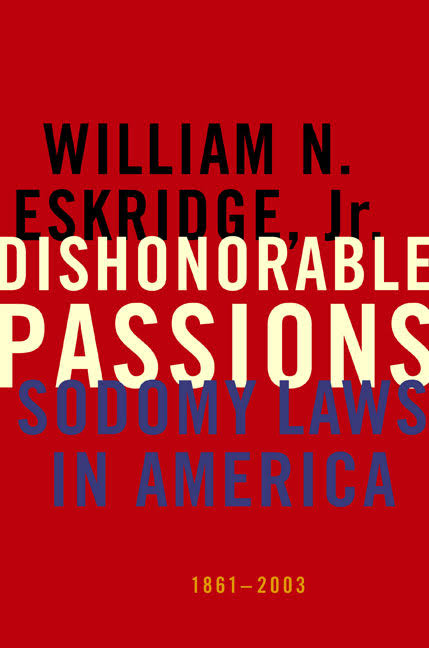 The American colonies and the early states prohibited sodomy as a "crime against nature," but rarely punished such conduct if it took place behind closed doors. By the twentieth century, America's emerging regulatory state targeted "degenerates" and (later) "homosexuals," ruining the lives of thousands of people. The nation's sexual revolution of the 1960s fueled a social movement of people seeking repeal of sodomy laws, but it was not until the Supreme Court's decision in Lawrence v. Texas in 2003 that private sex between consenting adults was decriminalized. With dramatic stories of both the hunted (Walt Whitman and Margaret Mead) and the hunters (Earl Warren and J. Edgar Hoover), DISHONORABLE PASSIONS reveals how American sodomy laws affected the lives of both homosexual and heterosexual Americans. Certain to provoke heated debate, this book is a must-read for anyone interested in the history of sexuality and its regulation in the United States.

"Today's battle for same-sex marriage rights is only the latest step in the long struggle by lesbians and gay men to overturn a complex web of state laws banning nonreproductive sexual activity, often by heterosexuals as well as homosexuals. Laws against sodomy—or crimes against nature, as they were called by colonial lawmakers—were based on English common law emanating from Christian interpretations of a few biblical passages. The Supreme Court declared them unconstitutional in 2003. In this fascinating and engaging survey, Yale law professor Eskridge charts not just the destructive history of those laws, but also the long, complex and often deeply contradictory history of how Americans thought about sex and the right to privacy. While clearly explaining the laws' origins and impact from colonial America through the 19th century, most of the book examines how, from the 1930s onward, sodomy laws increasingly became the legal tool by which homosexuals were denied jobs and even the right to public assembly. Interweaving legal discussion with personal stories and social history, Eskridge gives an incisive, panoramic view of America's (slowly) changing attitudes toward homosexuality, sexual tolerance and personal freedom." — Publishers Weekly