Dreams of a Great Small Nation

The Mutinous Army that Threatened a Revolution, Destroyed an Empire, Founded a Republic, and Remade the Map of Europe 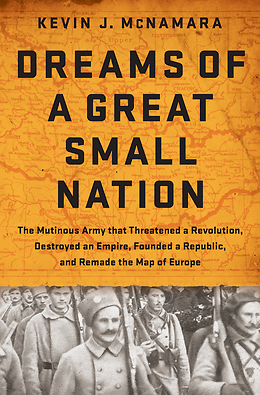 "In this strange way," observed historian A. J. P. Taylor, "the deathblow to an empire centuries old was struck far away on the railway platform at Chelyabinsk." On May 23, 1918, the Czecho Slovak Legion was waiting to board a train in Chelyabinsk, then the Western-most terminus of the Trans-Siberian Railway. The hope was that these 50,000 men would then board Allied ships that would circumnavigate the globe and deposit them in the trenches on behalf of the Allies—for whom they would fight in exchange for a country of their own. But, on that day, at the height of the German offensive in the West and on the 300th anniversary of the Defenestration of Prague, a Czech soldier killed an Austrian during a mass brawl. It was a seemingly minor incident, but it would set in motion a series of events that would forever alter the course of 20th century history.

News of the murder in Chelyabinsk sparked a bloodthirsty reaction in Moscow. Leon Trotsky, then at the head of the Bolshevik army, ordered all Czechoslovaks on Russian territory to be either shot or interned at POW camps. The Czech and Slovak legionnaires revolted, fighting the Red Army in a desperate struggle to return to their homeland. Over the next several years, they would wage war against the Bolsheviks and the Germans, as the two forces attempted to pin them down. They would cross the span of Siberia three times, for a brief time, wresting control of the continent away from the Red Army. At the head of the Legion’s great crusade was an aging, fugitive philosophy professor from Prague, Tomas Masaryk, a man who hatched the conspiracy to win back a homeland for his people, and would ultimately be welcomed as a national hero and the first president of his newly formed nation, Czechoslovakia.

“The pages of history recall scarcely any parallel episode at once so romantic in character and so extensive in scale” wrote Winston Churchill when recalling the exploits of the Czecho Slovak Legion. Dreams of a Great Small Nation is a riveting narrative of a history long suppressed by Soviet authorities.

"A fantastic addition to the shelves of World War I histories." — Kirkus Reviews (starred review)

"The first English-language account of a small army that actually took control of Siberia in 1918. While developing his story, McNamara, an associate scholar at the Foreign Policy Research Institute and associate dean at Drexel University, explains the birth of the Czecho-Slovak nation and the tireless work of three exiles: Tomáš Masaryk, Edvard Beneš, and Milan Štefánik. The first and most important point the author makes is that, while sharing a similar language and the oppression of the Austria-Hungarian Empire, the Slovaks of Hungary and the Czechs of Austria were never one people, as evidenced by their split in 1993. In fervent hopes that the war would take long enough to cause the collapse of the Habsburg Empire, Masaryk traveled all over Europe seeking support for the establishment of a new country. His decision to go to Russia to organize a druina of Czecho-Slovak troops created the army that would ensure the birth of the country, Czechoslovakia, that would call him president. Originally only about 350 former prisoners of war, the army eventually grew to a well-disciplined, cohesive group of more than 200,000. The story is extraordinary, and McNamara follows the frustrations of the men who became foils for the Russians, the Germans, and the Allies. Originally scheduled for transport on the Trans-Siberian Railway to Vladivostok for transfer to ships and passage to the Western front, the Russians wanted them in Murmansk while the Allies needed them to establish a second front in the war. McNamara, an impressive storyteller armed with a treasure of documents only recently available, ably narrates the remarkable feats of these men who fought every inch of the way, 'who found themselves described in some quarters as the first counterrevolutionaries of a new era.' Though newspapers across the globe followed the trek, actual assistance was in short supply. A fantastic addition to the shelves of World War I histories." — Kirkus Reviews (starred review)

"It is an epic story unknown even to many World War I history buffs…. With admirable energy he has assembled the story by piecing together archival records and the memoirs of the gallant men who served…. A fascinating narrative." — The Wall Street Journal

"In this captivating narrative history, foreign policy scholar McNamara reveals the obscure yet grand story of how a small, motley, and hastily organized army ushered in the founding of the nation of Czechoslovakia. The Czech and Slovak ethnic groups had for centuries been second-class subjects of the Austro-Hungarian Empire, enduring harsh oppression within the expansive and divided domains of the anachronistic monarchical regime. The upheaval of WWI provided opportunities to act on long-held nationalist yearnings. Tomás Masaryk (1850–1937), a resolute philosophy professor and protagonist in this story (aided by Edvard Beneš and Milan Rastislav Štefánik), embarked on an ambitious effort to organize a Czech-Slovak army from POW camps in Russia, aiming to support the Allied war effort in return for support for a postwar independent state. Masaryk successfully united Czechs and Slovaks abroad, cultivated international support, raised funds, and recruited military volunteers, while the Czech-Slovak forces—despite plenty of difficulties, particularly amid revolutionary tumult in Russia—won a long series of victories that galvanized their struggle. McNamara proves to be a great storyteller as he very effectively weaves together newly translated firsthand accounts of Czech-Slovak soldiers with secondary historical sources." — Publishers Weekly (starred review)