A Life of Duke Ellington 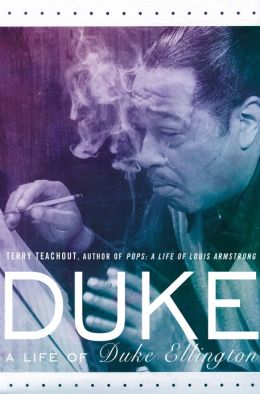 Edward Kennedy “Duke” Ellington was the greatest jazz composer of the twentieth century—and an impenetrably enigmatic personality whom no one, not even his closest friends, claimed to understand. The grandson of a slave, he dropped out of high school to become one of the world’s most famous musicians, a showman of incomparable suavity who was as comfortable in Carnegie Hall as in the nightclubs where he honed his style. He wrote some fifteen hundred compositions, many of which, like “Mood Indigo” and “Sophisticated Lady,” remain beloved standards, and he sought inspiration in an endless string of transient lovers, concealing his inner self behind a smiling mask of flowery language and ironic charm.

As the biographer of Louis Armstrong in his much praised Pops: A Life of Louis Armstrong, Terry Teachout is uniquely qualified to tell the story of the public and private lives of Duke Ellington. His Duke peels away countless layers of Ellington’s evasion and public deception to tell the unvarnished truth about the creative genius who inspired Miles Davis to say, “All the musicians should get together one certain day and get down on their knees and thank Duke.”

"Ellington's newest biographer, Terry Teachout, clearly saw the challenge of writing about the enigmatic legend.... Yet in his cleareyed reassessment of a man regarded in godlike terms, Teachout delves behind 'the mask of smiling, noncommittal urbanity that he showed to the world.' The facts and stories he relates aren't new, but rarely have they had such a compelling narrative flow or ring of reliability. As in his last book, Pops, Teachout keeps his psychoanalyzing within safe limits; he contextualizes historically without sounding contrived, and honors his subject's musical achievements through just the right amount of close analysis.... Teachout relates even the most dramatic episodes in the Ellington story with a poised impartiality. He doesn't take a novelistic approach, nor does he describe music with the lyrical flights of fancy favored by such writers as Greil Marcus and Lester Bangs. Teachout writes in an earthbound style marked by sound scholarship and easy readability. He particularly shines in his portraits of Ellington's renown sidemen.... In Teachout's poignant last pages, the jazz giant is broke and passé, yet still addicted to the lonely life on the road with a band he couldn't afford to maintain.... Duke humanizes a man whom history has kept on a pedestal." — James Gavin, The New York Times Book Review

"All elements of Ellington's colorful, complicated, oft-secretive life—public and private, musical and personal—are brought to vivid life in this grand and engrossing biography by New York writer Terry Teachout, whose previous book on Louis Armstrong was also an indispensable summary…. Thanks to this frank and sympathetic biography—whose every page is studded with sharp phrases and keen insights—we now seem to know Duke Ellington as well as we ever will or need to." — Tom Nolan, San Francisco Chronicle

"A mesmerizing story…. Teachout brings Ellington to life in this richly detailed and engrossing biography." — BookPage

"With this exhaustive, engaging study of the greatest jazz composer of his era, Wall Street Journal drama critic Teachout solidifies his place as one of America’s great music biographers. Many have cited jazz as America's only true indigenous art form, so it is at once surprising and disheartening that major publishers are seemingly hesitant to champion books that tackle the subject—especially considering that when an author is allowed the freedom to dive into the life and music of a jazz titan, the results are often brilliant, something that Teachout demonstrated with his justifiably revered Pops: A Life of Louis Armstrong. After Armstrong, chronologically speaking, bandleader/composer/arranger/pianist Duke Ellington was jazz’s next game changer. Aside from his undeniably astounding ear, Ellington, like Armstrong, was a personality, one of the rare jazzmen who was able to combine heady music with showbiz panache without diminishing his art. With his vibrant prose and ability to get into his protagonist’s head and heart, Teachout captures this essence and charisma in a manner worthy of Ellington’s complex yet listenable classic ‘The Queen’s Suite.’ One of Ellington’s most notable nonmusical qualities was his loyalty, and the author gives some of his longtime sidemen and compatriots—e.g., composer Billy Strayhorn and saxophonists Johnny Hodges and Paul Gonsalves—their due. Finally, as was the case in Pops, Teachout’s musical analysis is spot-on, at once complex and accessible. It will be appreciated equally by those who have 100 Ellington albums and those whose awareness of the Duke is limited to his best-known tunes like ‘Take the ‘A’ Train’ and ‘Satin Doll.’ Hopefully, the brilliance of Teachout’s treatment will compel the industry to let authors take a crack at the lives of, say, Ornette Coleman, Count Basie and Charles Mingus. Like most Ellington albums, Teachout’s in-depth, well-researched, loving study of this American treasure is an instant classic." — Kirkus Reviews (starred review)

"Most absorbing…. Very satisfying to read and full of tested fact about the maestro…. The writing style is so good that this is a memorable experience, as well as being probably the definitive biography. It seems to me that there can be little more about Duke Ellington to uncover and that Teachout’s book, as in the case of his earlier one on Armstrong, is the masterwork." — Steve Voce, Jazz Journal

"The revealing biography chronicles the life of the legendary jazz bandleader and composer, who conjured great music out of other men’s ideas. Wall Street Journal critic Teachout presents a charismatic, charming, debonair man who brought a new artistic depth to a disreputable popular entertainment—and a self-centered bastard who suavely manipulated everyone from his sidemen to his countless paramours. (His infidelities provoked his wife to slash him with a razor and a mistress to pull a gun when she caught him in bed with another woman.) Teachout’s focus on his subject’s creative process sometimes clashes with his assertion that Ellington was 'the greatest composer in the history of jazz'; the unevenness of the Duke’s oeuvre and his reliance on tunes appropriated from writing partner Billy Strayhorn and other band members without proper crediting raises the question of whether his “radically collaborative” methods really comport with our notion of a brilliant composer. Yet Ellington’s crucial role as a shaper and solidifier of his band’s improvisational musical outpourings comes through clearly in the book. Teachout neatly balances colorful anecdote with shrewd character assessments and musicological analysis, and he manages to debunk Ellington’s self-mythologizing, while preserving his stature as the man who caught jazz’s ephemeral genius in a bottle." — Publishers Weekly

"What was in this dance music, heard in short takes on scratchy 78s, that left its devotees devoted to some larger set of humane values? The question is at the heart of Terry Teachout's searching new biography, Duke: A Life of Duke Ellington, which touches on the mystique of the great bandleader's music as much as on its notes and measures…. This is Teachout's second big jazz biography. His first was Pops, an excellent volume on Louis Armstrong, which he turned into an even better play, 'Satchmo at the Waldorf.' Teachout is a sensitive writer, and one reason his biographies are so moving is that he has obviously been giving himself an education in the realities of American racial history as he writes them." — Adam Gopnik, The New Yorker

"In the selective bibliography of this comprehensive and well-researched life of America’s greatest jazz and popular-music composer and orchestra leader, there are more than a dozen full biographies; memoirs by Ellington himself (however unreliable), by his son, Mercer, and by several band members; as well as innumerable profiles and a variety of periphera. One might have thought yet another life, admittedly a 'synthesis,' 40 years after the subject’s death might be superfluous. In this addition to our music literature, however, Teachout, drama critic for the Wall Street Journal and author of, among other writings, a biography of Louis Armstrong, abundantly justifies the effort. Though respectful and musically knowing, Teachout presents the famously evasive and not altogether admirable Ellington (among other traits, procrastination, manipulativeness, and incorrigible womanizing) scars and all, including the rarely photographed one (rectified here) on his left cheek, inflicted by his jealous wife. It is Ellington’s breathtakingly enormous musical contribution (1,700 compositions, from short pieces to major suites and sacred music) and his gift for collaboration, albeit often appropriation, that is the fitting focus of this important book. Included is a list of 'key recordings,' all currently downloadable, a perfect accompaniment to one’s reading of this entertaining and valuable biography." — Booklist (starred review)

"Although Ellington wrote an autobiography and has been profiled in several other books over the years, few of these get at the complexity of Ellington's private life and his personality as a bandleader. Teachout's writing is clear, the facts seem to be well supported both from previously published sources and from interviews, and some of the awareness that the author provides (e.g., the extent to which Ellington was a collaborative composer who used ideas from his band members) will expand readers’ view of the man who was perhaps the greatest jazz composer of the 20th century. Photographs sprinkled throughout are well chosen to provide support to Teachout's points in the text. Teachout gives much insight into Ellington's life, personality, working habits, and compositions. This work should appeal to Ellington enthusiasts as well as casual jazz fans." — Library Journal

"Terry Teachout’s Duke: A Life of Duke Ellington is a thoroughly researched homage to this complex genius. Much like he did with his very fine 2009 biography, Pops: A Life of Louis Armstrong, Teachout exhaustively explores Ellington’s influence as one of the greatest composers in any genre. Like a detective, Teachout pieces together clues to discover the private Duke. Given Ellington’s enigmatic person, this is no easy feat. However, Teachout delivers a Duke unlike any we’ve seen in previous biographies." — Patrik Bass, Essence