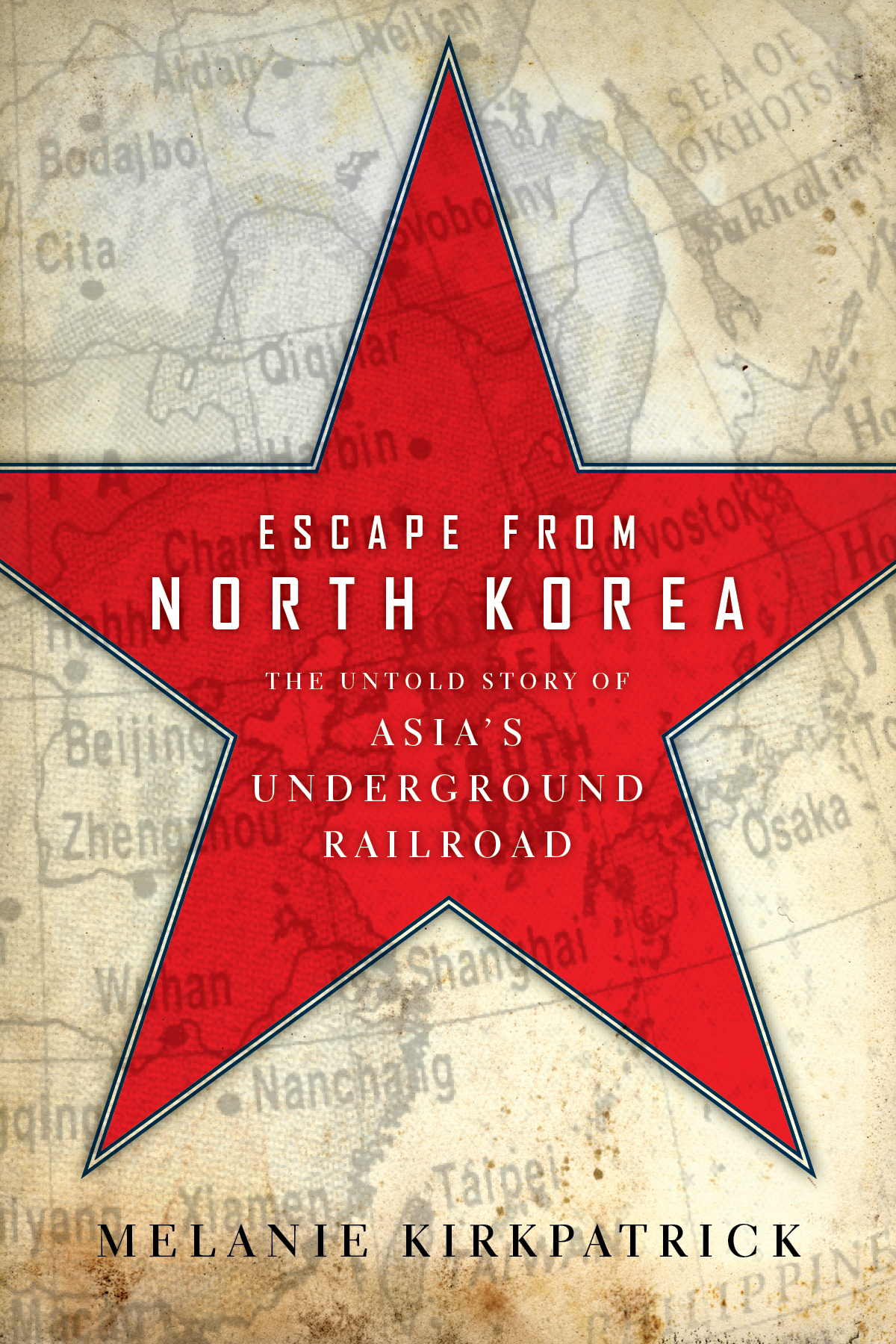 From the world’s most repressive state comes rare good news: the escape to freedom of a small number of its people. It is a crime to leave North Korea. Yet increasing numbers of North Koreans dare to flee. They go first to neighboring China, which rejects them as criminals, then on to Southeast Asia or Mongolia, and finally to South Korea, the United States, and other free countries. They travel along a secret route known as the new underground railroad.

With a journalist’s grasp of events and a novelist’s ear for narrative, Melanie Kirkpatrick tells the story of the North Koreans’ quest for liberty. Travelers on the new underground railroad include women bound to Chinese men who purchased them as brides, defectors carrying state secrets, and POWS from the Korean War held captive in the North for more than half a century. Their conductors are brokers who are in it for the money as well as Christians who are in it to serve God.  The Christians see their mission as the liberation of North Korea one person at a time.

Just as escaped slaves from the American South educated Americans about the evils of slavery, the North Korean fugitives are informing the world about the secretive country they fled.  Escape From North Korea describes how they also are sowing the seeds for change within North Korea itself. Once they reach sanctuary, the escapees channel news back to those they left behind. In doing so, they are helping to open their information-starved homeland, exposing their countrymen to liberal ideas, and laying the intellectual groundwork for the transformation of the totalitarian regime that keeps their fellow citizens in chains.

"Book of the Year"—World Magazine

"Our No. 1 Book of the Year is former Wall Street Journal editor Melanie Kirpatrick's Escape from North Korea. Kirkpatrick tells one of the most tragic but also heroic stories of our time, documenting the way desperate North Koreans flee their country.... The book is journalism at its best, combining an important issue, meticulous reporting, and great storytelling." — The Editors, World Magazine

"Former deputy editor of the Wall Street Journal Melanie Kirkpatrick has written a compelling book describing the tortuous path North Koreans must undertake across China to reach freedom in South Korea and other countries in the West. The book captures the multiple paths that desperate North Koreans have taken to arrive safely in South Korea and the West. It champions the sacrifices of dedicated individuals outside North Korea who have risked their lives to assist North Koreans in their road to freedom and to provide information back to North Korea about the outside world. And it savages the policies of governments including China, the United States, and South Korea for turning a blind eye to the suffering of North Koreans who are victims of an uncompromising totalitarian political system…. Despite the efforts of courageous facilitators who comprise Asia's underground railroad, the road to freedom Kirkpatrick describes remains unnecessarily fraught with risk and tragedy for those who are caught, sold, or repatriated to severe punishments in North Korea. Escape from North Korea stands alongside Nothing to Envy and Escape from Camp Fourteen as books that highlight the tragic human consequences of North Korea's systemic failure…. These books convey the previously silenced voices of North Koreans, alongside North Korean refugee autobiographies…. The conditions reported by North Korean refugees who have experienced detention in North Korea are exactly the circumstances that the world has resolved should never be allowed to happen again. But it is happening, and Melanie Kirkpatrick's book provides a call for action." — Scott Snyder, The Atlantic

"Many extraordinary personal stories [are] told in Escape from North Korea by Melanie Kirkpatrick, former deputy editor of the editorial page at the Wall Street Journal. The book describes how 24,000 North Koreans have escaped from their country since 1953, a small number going to the U.S. and Europe and the vast majority going to South Korea. Kirkpatrick compares their perilous passage to the secret escape route of slaves from the American South before President Abraham Lincoln abolished the practice in 1862. The book makes remarkable reading…. The wealth of this book is in the details – the personal stories which Kirkpatrick has gathered in dozens of interviews in the United States, South Korea and China. It is the personal stories of the refugees and those who help them that are the most moving and extraordinary. The subject is never covered in such detail in the mainstream media…. We should congratulate Kirkpatrick on an excellent piece of research and reporting, throwing light on an extraordinary world that is hidden from sight." — Mark O'Neill, Asia Sentinel

"This lucid and gripping book might well prompt a revolution in how Americans see North Korea. It certainly should…. Through sustained and systematic research and old-fashioned shoe leather, Kirkpatrick uses individual incidents and the available (although usually sparse) official data to describe what the mainstream media have largely missed for decades. She traces the chilling arc of enormous risk North Koreans seeking freedom must be prepared to take in escaping their country-wide prison camp…. Escape from North Korea may someday be compared to Harriet Beecher Stowe's Uncle Tom's Cabin for blowing the lid off the DPRK gulag. In the meantime, anyone who wants to be truly knowledgeable about Korea or China has an obligation to read Kirkpatrick's book." — John R. Bolton, National Review

"Melanie Kirkpatrick's Escape from North Korea is an important and stirring account of the refugees from the North and their helpers…. Ms. Kirkpatrick vividly traces the harrowing journey that refugees must undergo…. Escape from North Korea makes a valuable addition to the growing body of literature that exposes the evils of the North Korean state and also chronicles the heroism of those have struggled to make a better life elsewhere." — Sue Mi Terry, The Wall Street Journal

"A vivid new account of what life on the run is like for fugitives from the world's last Stalinist state…. Where the book excels is in detailing the experiences of women sold as brides, stateless children from unofficial marriages, men sent as slave labor to log in the forests of Siberia, and the individuals determined to help fugitives from North Korea make their way to freedom." — Bangkok Post

"She tells a story of bravery, luck, disappointment, and death..... Escape from North Korea reaches us at a timely moment.... Here is a rare book that puts human faces on the numbers, a lamentation over policies and duplicities that have haunted a people terribly divided." — Robert Joustra, Christianity Today

"Christopher Hitchens wrote that ‘the human rights movement, hitherto unpardonably tongue-tied about all this, should insistently take up the case of North Korea and demand that an underground railway, or perhaps even an overground one, be established. Any Korean slave who can get out should be welcomed, fed, protected, and assisted to move to South Korea.’ It turns out that an underground railway exists—it had just never been described with power and precision. It finally has been, in Melanie Kirkpatrick’s new book, Escape From North Korea, which chronicles the perilous, sometimes fatal journeys of the rare individuals who escape North Korea’s hell and the heroic Christian activists, students, and average Americans who aid them. A former editor at the Wall Street Journal editorial page, Kirkpatrick does the kind of work that many human-rights activists don’t: reporting on a closed society…. But through rigorous reporting about ‘freedom-seekers and their rescuers,’ Kirkpatrick brings the brutality of the Hermit Kingdom to life by telling the stories of real people." — David Keyes, Tablet Magazine

"As a reporter and later an editor at The Wall Street Journal, Kirkpatrick has followed the plight of North Korean refugees for years. Her new book is not a litany of horrors, though, but rather a hopeful report on the efforts of Chinese, South Korean and American Christians to help the refugees. It is a moving document, and intended as an inspirational tale…. Kirkpatrick's book has important value to analysts of East Asian politics…. She has written a compelling case study that is as painful to read as it is hard to put down." — Spengler, Asia Times

"Tales of escape from the brutal Kim dynasty moved former Wall Street Journal staffer Kirkpatrick to create this vivid account of North Koreans who dared to make the leap for liberty…. In addition to her analysis of the political climate of the country and the international community's response to its plight, Kirkpatrick presents harrowing testimonies from dozens of North Korean refugees to produce a timely portrait of a people desperate for freedom." — Publishers Weekly