The False Promise of Higher Education 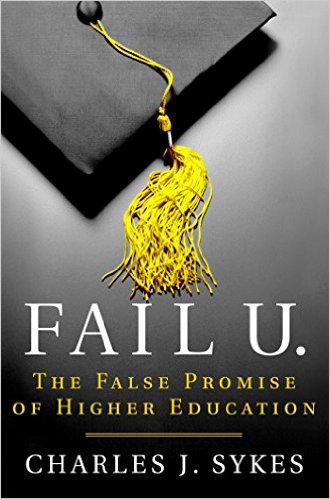 The cost of a college degree has increased by 1,125% since 1978—four times the rate of inflation. Total student debt is $1.3 trillion. Many private universities charge tuitions of about $70,000 per year. Nearly two-thirds of all college students must borrow to study, and the average student graduates with more than $30,000 in debt. 53% of college graduates under 25 years old are unemployed or underemployed (working part-time or in low-paying jobs that do not require college degrees). Professors rarely teach undergraduates at many major universities:  76% of all university classes are taught by part-time, untenured faculty.

In this book, Charles J. Sykes asks, "Is it worth it?" With chapters exploring the staggering costs of a college education, the sharp decline in tenured faculty and teaching loads, the explosion of administrator jobs, the grandiose building plans (gyms, food courts, student recreation centers), and the hysteria surrounding the "epidemic" of campus rapes, "triggers," "micro-aggressions," and other forms of alleged trauma, the book concludes by offering a different vision of higher education; one that is affordable, more productive, and better-suited to meet the needs of a diverse range of students.

Provocative, persuasive, clear-eyed, and even amusing, Fail U. strips the academic emperor of its clothes to reveal the American university system as it really is—and how it must change.

"For nearly thirty years, Charles Sykes has had his finger on the disturbed pulse of American culture. In 1988, his book Profscam exposed the professoriate as an inbred, self-perpetuating, and ideologically disfigured racket that placed the perquisites of the academic brotherhood in front of the educational needs of students. Several other books followed, including Dumbing Down Our Kids and A Nation of Victims. In his latest foray, Fail U: The False Promise of Higher Education, Sykes casts a mournful eye over the higher-education establishment. He focuses particularly on the astonishing cost of college and asks the question that many parents must be asking themselves as they take out a mortgage to pay the obscene, out of control fees exacted by the bloated, politically correct institutions to which they entrust their children: is it worth it? Comprehensive fees at many colleges today approach $70,000, after tax. Exactly what does one get in exchange for that nearly $300,000? Sykes provides a depressing but eye-opening anatomy of the disaster that is higher education today, taking the reader from the unlovely, fiscally incontinent precincts of 'Victim U' to the prospect of genuine reform on the other side of the higher education bubble. The entrenched mandarins of academia—those battalions of deans, diversity counselors and the like—will loathe this book. Public-spirit people who care about the quality and the cost of higher education will welcome it as a potent ally." — The New Criterion

"As he did in The Hollow Men and ProfScam, Sykes here poses hard questions about the quality and substance of what the nation’s universities now deliver. Too often, Sykes concludes, colleges give their students little but debt to show for their years on campus. As they visit a wide range of schools, readers see how administrators lavish resources on impressive buildings, on powerhouse athletic programs, and on aloof professors who dodge students so they can write unreadable and unread tomes of research. With telling statistics and piquant anecdotes, Sykes indicts higher educators for teaching students little about the humanities, mathematics, or the sciences, while indoctrinating them in rigid new political orthodoxies. Laying out a bold agenda for reform, Sykes calls for a university system smaller and less dependent on government largesse, less politically correct, and more open to online instruction than the one now bankrupting many students and their families. Certain to stimulate a much-needed debate." — Booklist (starred review)