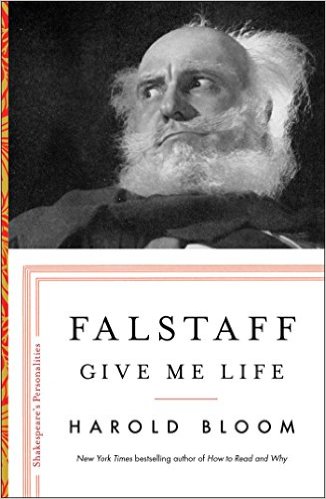 Falstaff is both a comic and tragic protagonist in Shakespeare’s three Henry plays: Henry IV, Parts One and Two, and Henry V.  He is companion to Prince Hal (the future Henry V), who loves him, goads, him, teases him, indulges his vast appetites, and commits all sorts of mischief with him—some innocent, some cruel.  Falstaff can be lewd, funny, careless of others, a bad creditor, an unreliable friend, and in the end, devastatingly reckless in his presumption of loyalty from the new King.

Bloom writes about Falstaff with compassion and sympathy and with unerring wisdom. He uses the relationship between Falstaff and Hal to explore the devastation of severed bonds and the heartbreak of betrayal. Just as we encounter one type of Anna Karenina or Jay Gatsby when we are young adults and another when we are middle-aged, Bloom writes about his own shifting understanding of Falstaff over the course of his lifetime. Ultimately we come away with a deeper appreciation of this profound character.

Bloom achieves an exhilarating clarity in Falstaff, and the book becomes an extraordinarily moving argument for literature as a path to and a measure of our humanity.

"This book is an explanation and a reiteration of why Falstaff matters to Bloom, and why Falstaff is one of literature’s vital forces. These two strands of argument cannot be separated. Bloom is not a thinker who tries to take himself out of the equation. As a teacher and a writer he has always wanted to make us feel something, as well as to understand something. Profoundly learned himself, his learning is a call to life — that we are, or can be, altered and enriched by what we know…. Bloom is always a pleasure to read — the language simple and direct, yet easily conveying complexity of thought…. Bloom’s book is a timely reminder of the power and possibility of words." — Jeanette Winterson, The New York Times Book Review  (Read the full review)

"In Bloom’s view, Shakespeare was not only the supreme literary genius in human history, but also—and, yes, he appears to mean this literally—the greatest intellect who ever lived. It seems a stretch, even for a lover of Shakespeare. But it’s clear that for Bloom this assertion, however hyperbolic, fulfills some extremely deep-seated need. In any event, what Bloom gives us in Give Me Life turns out to be a highly personal mélange—a treasury of reflections on Falstaff, digres¬sions into Shakespeare’s life and times and into other items in Shakespeare’s oeuvre, and extensive quotations not only from the Henriad but also from other plays, as well as from Biblical passages to which Falstaff and other characters in the Henriad allude…. He lets fly the kind of grandiose, if sometimes head-scratching, dicta that only an accredited sage can get away with…. So it goes. If you are on the lookout for some university-press tome that meticulously seeks to validate some abstruse thesis about Falstaff—especially one that’s steeped in postmodern ideology, equipped with the usual pretentious jargon, and packed with references to Foucault and Lacan—this isn’t what you’re looking for. If, on the contrary, you’re in the mood for something that approximates the experience of sitting in a comfy chair in Professor Bloom’s living room while he holds forth meanderingly—by turns ecstatic, wistful, whimsical, and penetrating—on his very favorite personage in all of Shakespeare, you will surely want to spend your dime, and your time, on this amiable bauble." — Bruce Bawer, The Hudson Review  (Read the full review)

"Falstaff: Give Me Life is the 46th book by the eminent Yale professor, who even now is teaching two courses, one on Shakespeare and another on poetry. Over the years, he has won a range of distinctions, including a Fulbright fellowship (1955), a MacArthur fellowship (1985) and a gold medal from the American Academy of Arts and Letters (1999). But he has also been a controversial voice over his 60-plus-year career. In The Western Canon (1994), he argued that certain writers, including Shakespeare, Homer, Dante and Tolstoy, are essential to any real education. He also railed against what he called the ‘School of Resentment’: scholars who promote reading texts from the point of view of feminism, Marxism and other ideologies and who advocate expanding the canon to be more multicultural. ‘To read in the service of any ideology is not, in my judgment, to read at all,’ he wrote. He sees political correctness as a continuing problem in universities today, but he hesitates to wade into the debate again. ‘I’ve had too many polemics in my life,’ he says. ‘For 50 years I fought the death of humanistic studies in the universities and colleges and, in general, the failure of our intellectual education.’ He’s tired of fighting, he says. ‘We lost the war,’ he adds. ‘All I can do now is a kind of guerrilla action, but in the end there’s only Shakespeare.’… The next book in his series on Shakespearean characters will focus on Cleopatra, followed by King Lear, Iago and Macbeth." — Alexandra Wolfe, The Wall Street Journal  (Read the full review)

"An ardent admirer of Shakespeare analyzes an incomparably robust character. For esteemed literary critic Bloom, MacArthur Fellow and winner of multiple awards and honorary degrees, Shakespeare’s Sir John Falstaff has enduring appeal, a character who ‘springs to life’ anew each time he is read or seen on stage. Falstaff, Bloom asserts, ‘is as bewildering as Hamlet, as infinitely varied as Cleopatra.’ Unlike the beleaguered, grieving prince or the Egyptian queen, however, Falstaff appears in plays not as frequently performed: Shakespeare’s trilogy of Henry plays. Bloom, though, assumes his readers—like students who have done their assignments—are as cognizant of these plays as he is. In 21 chapters, he analyzes excerpts from the plays to support his argument that the ribald Falstaff is life-affirming, ‘everliving,’ and ‘the greatest wit in literature.’ Bloom, now 86, feeling some diminishment with age, is buoyed by Falstaff, who ‘resolutely remains a child’ and ‘finds fresh delight in play.’ Bloom gained some insight into the character when he performed the role with the American Repertory Theatre in Cambridge, Massachusetts, in 2000 and at Yale, and he has seen a host of notable actors take it on. He especially admires the interpretations of Ralph Richardson, who played Falstaff with ‘a wounded dignity,’ and Orson Welles, who ‘relished the goodness of every phrase’ that Falstaff spoke, ‘tasting it as if it were bread and wine.’ Of all Shakespeare’s characters, Falstaff and Hamlet seem to Bloom ‘as being creations nearest’ to the ‘concealed inwardness’ of the playwright. Indeed, he writes, ‘it is difficult for me to withstand the temptation of identifying the Fat Knight with Shakespeare himself.’ In this first of five books about Shakespearean personalities, Bloom brings erudition and boundless enthusiasm." — Kirkus Reviews (starred review)

"Shakespearean scholar Bloom fits many treasures into a scant number of pages in what is first and foremost a moving personal appreciation of what Bloom considers Shakespeare’s most complete and effective character, Sir John Falstaff. The errant knight gets his due in Bloom’s moving description of how Shakespeare’s invention touched his life from adolescence on. In addition, the reader is treated to a close reading of Falstaff in the histories…. Part of this analysis is devoted to the characters in the Henriad (newly dubbed ‘the Falstaffiad’ in this study) who echo Sir John. Hotspur, Hal, and Henry IV are all viewed through the prism of the corpulent crusader and the insights are solid, if not revolutionary. Bloom also devotes his attention to Falstaff in performance. Using Ralph Richardson’s legendary enactment at the Old Vic and Orson Welles in his neglected masterpiece Chimes at Midnight, Bloom demonstrates how the plays work not just on the page but in the theater. VERDICT: An enchanting and appreciative celebration of Shakespeare’s greatest comic creation." — John Frank, Los Angeles Public Library, Library Journal

"Famed literary critic and Yale professor Bloom showcases his favorite Shakespearian character in this poignant work. Falstaff, one of Shakespeare’s most complex tragicomic characters, appears in Henry IV Part One and Part Two and The Merry Wives of Windsor, and is referred to in Henry V. Bloom covers the many facets of a ‘disreputable and joyous’ character, a knight, highwayman, jovial wit, and enthusiastic imbiber of sack (fortified wine) at the Boar’s Head Tavern in London. The book also attends to Falstaff’s motley crew, including Doll Tearsheet, a prostitute; Ancient Pistol, ‘a street hoodlum’; and Mistress Quickly, the tavern’s malapropism-prone proprietor. Notably, Falstaff is also a nonjudgmental companion to Prince Hal, the son of Henry IV, and Bloom traces their relationship up to Prince Hal’s ultimate rejection and betrayal of Falstaff upon being crowned King Henry V. The author notes that the Henry plays’ historical aspects interest him less than the changing characters of Falstaff and, to a lesser extent, Hal. Bloom, who says he fell in love with Falstaff because ‘he exposes what is counterfeit in me and in all others,’ has created a larger-than-life portrait of a flawed character who is ‘at his best a giant image of human freedom.’" — Publishers Weekly