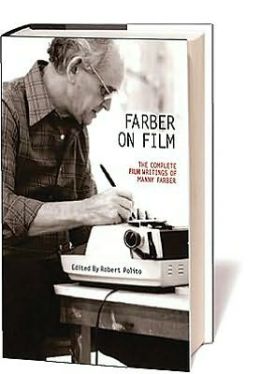 Manny Farber (1917–2008) was a unique figure among American movie critics. Champion of what he called "termite art"—focused, often eccentric virtuosity as opposed to "white elephant" monumentality—master of a  prose style with jazz-like phrasing and incandescent twists and turns, he made every review an adventure and has long been revered by his peers.

Farber was an early discoverer of many filmmakers later acclaimed as American masters: Val Lewton, Preston Sturges, Samuel Fuller, Raoul Walsh, Anthony Mann. A prodigiously gifted painter himself, he brought to his writing an artist's eye for what was on the screen. Alert to any filmmaker, no matter how marginal or unsung, who was "doing go-for-broke art and not caring what comes of it," he was uncompromising in his contempt for pretension and trendiness, for, as he put it, directors who "pin the viewer to the wall and slug him with wet towels of artiness and significance."  He wrote critical essays that are themselves works of art.

Farber on Film contains this extraordinary body of work in its entirety for the first time, from his early and previously uncollected weekly reviews for The New Republic and The Nation to his brilliant later essays (some written in collaboration with his wife, Patricia Patterson) on Godard, Fassbinder, Herzog, Scorsese, Altman, and others. Editor Robert Polito has written an introduction that examines in detail the stages of Farber's career and his enduring significance as writer and thinker.

"Finally, a definitive collection of work by one of America’s greatest film critics. Manny Farber’s approach to movies was utterly unique—he saw elements and values that no one else saw, and he gave us the tools to see them, too." — Martin Scorsese

"With serious film criticism probably in an inexorable decline due to vanishing venues for publication and the dumbing-down of the moviegoing audience, these writings by the late Farber constitute a pointed reminder of what will be lost. Farber is best known for championing the B movies of such maverick filmmakers as producer Val Lewton and director Sam Fuller, most notably in a signature 1962 essay in which he excoriated moribund white elephant art and praised the termite art made by eager, eccentric artists, art that goes always forward eating its own boundaries. This long-overdue volume amasses all of Farber’s cinematic writings, from weekly reviews for the New Republic and the Nation in the 1940s and ’50s to wider-ranging essays of the ’60s and ’70s for such specialized publications as Artforum. Throughout, Farber’s iconoclastic viewpoints—he panned The Magnificent Ambersons and Casablanca—and virtuosic prose provide limitless rewards for readers who can negotiate his unexpected intellectual and stylistic turns. The insight and imagination Farber brings to his subjects, whether a Bugs Bunny cartoon or, in his last published film writing, the uncompromising French masterpiece Jeanne Dielman, is an exemplar for criticism of any sort." — Booklist

"Manny Farber is the liveliest, smartest, most original film critic this country ever produced. Maybe that’s because he wasn’t a film critic only but was – is – a wonderful painter. Farber’s mind and eye change the way you see." — Susan Sontag

"Manny Farber is one of the few movie critics who have mattered in this country. He has shaped and sharpened the sensibilities of two generations of people who care about film. Certainly he was the first to think seriously and coherently about the American action film, thereby creating an aesthetic that allowed us to fully apprehend, for the first time, our native genius for movie-making. Farber set in motion a revolution in our tastes and perceptions that is still proceeding. . . . He is the father of us all." — Richard Schickel

"Farber is cranky and eccentric, razor-sharp in his perceptions, irritable and irritating, never less than brilliant as a writer, and one of the precious few American critics who encourage the making of movies as opposed to cinema, and probably the last one who champions a lack of pretense in the art he likes." — Peter Bogdanovich

"What makes Farber a great movie critic is first and foremost a freshness and sensitivity of response to the medium itself. He watches a film not as a disguised novel, play or tract but as a movie. He knows that before art is anything else it is experience, and what is exciting about his writing is his ability to evoke the mysterious experience of film. . . . Farber’s language is of a piece with his sensual clarity and moral stringency . . . a fabulous, homegrown American style that leaps from elbowing eccentricity to a brilliant skeet-shooting explosion of feeling and thought." — Jack Kroll, Newsweek

"A gem. . . . As alive with stunning images, original metaphors, and unexpected twists as the films Farber brings to life with his condensed, electric prose. . . . His views are unorthodox, intensely personal, and reverberating with excitement and controversy." — Barbara Rose, Vogue