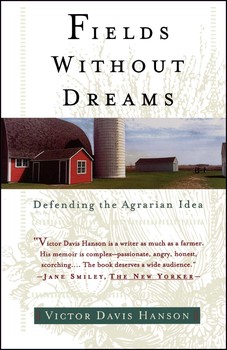 "So detailed, so angry and funny, that it will surely find a lasting readership." — Bill McKibben, The New York Review of Books

"Hanson's memoir, informed by almost three thousand years of Western history, is passionate, confrontational, and bracingly apocalyptic. As the era of the family farm ends, perhaps it is true that a certain strain of rural literature where life and death are at issue and drama are hardly mitigated by culture, is also ending. If so, FIELDS WITHOUT DREAMS is a fitting valedictory work ...[Hanson] writes like a Greek, with hubris, pursuit by Furies, fate, and tragic irony in full measure.... He's a writer as much as a farmer. His memoir is complex — passionate, angry, honest, scorching.... The book deserves a wide audience. His tale is suspenseful, even though the outcome, as in a tragedy, is a foregone conclusion. He's a good storyteller and a complex man, and his Greek-inspired rhetoric is a bracing departure from the agronomy-speak that has eviscerated discussion of these issues." — Jane Smiley, The New Yorker

"FIELDS WITHOUT DREAMS is a raging little masterpiece. A populist screed that rubs the reader's nose in dirt and muck. It's a rhetorical shit-storm of a book, a rancid revolutionary tract. Awesomely bitter, colossally aggrieved, and laced with a Depression-era fierceness that strikes like a rusty pitchfork to the brain...it's riveting and singular." — Walter Kirn, New York

"A vivid work that on the whole is more honest about people who live on the land than any of recent vintage. FIELDS WITHOUT DREAMS is a deadly serious book, but it is enormously entertaining as well." — The Weekly Standard

"[A] beautiful, combative elegy for the beleaguered family farmer.... FIELDS WITHOUT DREAMS is the best written, most shrewdly observed account of the farmer's world to appear in some time.... Hanson's voice is by turns scabrous and compassionate, as resolute in the depiction of villainy as it is heartbreakingly eloquent in its descriptions of physical labor and human virtue.... With this masterpiece of a book, we have, finally, an American Hesiod." — The Sunday Oregonian

"An unusually literate work, at once paean and dirge, on the decline of family farming, which also happens to mark 'the end of a historical cycle in America.' Hanson is both a professor of Greek and a farmer in the Central Valley of California. This lends his book a refreshingly antiquarian air in the gloom-and-doom library of current, resoundingly modern environmental writing. Certainly few other writers share comfort in likening the raisin farmers of Modesto to the hero Ajax of the Homeric epics or Aeschylus's virtuous man, who 'did not wish to seem just, but to be so;' few even command the literary sources that would enable them to do so. His deep learning also affords the author a certain archness that is not unpleasant. 'Is it not odd,' he writes with nice disdain for orthodoxies, 'to rise at dawn with Japanese-, Mexican-, Pakistani-, Armenian-, and Portuguese-American farmers and then be lectured at noonday 40 miles away on campus cultural sensitivity and the need for diversity by the affluent white denizens of an exclusive tree-studded suburb?' In a ringing defense of the old ways of farming and of rural life, Hanson gives us the histories of men like Rhys Burton, who died at the age of 86 after a lifetime of working the land, and the raisin magnate Bus Barzagus, observing with passion and sorrow that their way of life will likely soon disappear, thanks in part to a federal system of agricultural subsidies that favors large-scale, industrial farm corporations over individual 'yeomen.' That system, Hanson suggests, hastens the decline of our democracy of freeholders and the rise of agro-corporate tyranny. The Southern Agrarians made much same point in the mid-1930s, when agricultural apocalypse announced itself in the Dust Bowl. So today does Wendell Berry, alongside whose agrarian essays this intriguing book should be shelved." — Kirkus Reviews