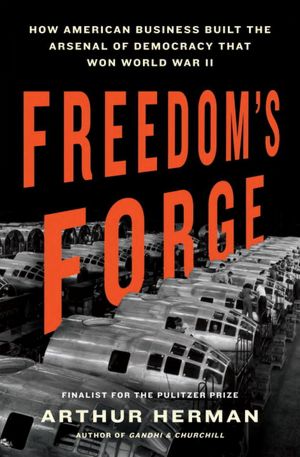 “It’s not often that a historian comes up with a fresh approach to an absolutely critical element of the Allied victory in World War II, but Pulitzer finalist Herman has done just that.  The author argues powerfully against the conventional wisdom that America’s rearmament took place under the guidance of a competent federal government that brought business and labor together for the country’s defense. To the dismay of New Dealers who had hoped to use the war to bring business under government control, the production of the flood of war materiel that drowned the Axis was achieved by the voluntary cooperation of businesses driven as much by the profit motive as by patriotism, solving problems through their own ingenuity rather than waiting for government directives. The physical and organizational challenges were overwhelming. The production of sufficient familiar armaments required expanding existing moribund plants and constructing new ones, then manufacturing new machine tools and organizing their use to maximize efficiency. Doing the same for enormously complex new weapons, in particular the B-29 bomber with 40,000 different parts made by 1,400 subcontractors, was an even more staggering task, exacerbated by materials shortages and recalcitrant labor unions. A story resting on the statistics of industrial production runs a constant risk of lapsing into tedium, but Herman’s account never falters. He carries it off in engaging style by centering this sweeping narrative on the efforts of two colorful business leaders, Henry Kaiser and William Knudsen, who led the struggle to produce ships, planes and arms for Britain and then for America in a war that many had persisted in believing wasn’t coming. A magnificent, controversial re-examination of the role of American business in winning WWII.”—Kirkus Reviews (starred review)

"Arthur Herman has set out to right an injustice: the loss, down history’s memory hole, of the epic achievements of American business in helping the United States and its allies win World War II…. He believes that American business has never gotten its due. He contends that it won the war but lost ‘the narrative.’ Business was denigrated by envious New Dealers, he says, and upstaged by the Keynesian focus on the war years’ $300 billion in deficit spending that finally ended the Great Depression. The author is avowedly pro-business, but you don’t have to share that perspective to enjoy Freedom’s Forge. It is indeed a rarely told industrial saga, rich with particulars of the growing pains and eventual triumphs of American industry as it exploded from negligible arms output to an arsenal of weaponry then unmatched in human history…. These often-chaotic industrial efforts were indeed monumental—and it is still hard today to grasp such a breathtaking national achievement." — Fred Andrews, The New York Times

"This fantastic book does two big things. First, it tells the largely unknown story of America’s extra ordinary output of war materials during World War II—output that almost defies imagination. By war’s end the U.S. had manufactured about 70% of all Allied war material, with U.S. factories outproducing everyone else combined.... The second thing this book does is emphasize that it was the practice of free enterprise that was behind these production miracles.… Freedom’s Forge sets the record straight, comprehensively and compellingly." — Steve Forbes, Forbes Magazine  (Read the full review)

"A rambunctious book that is itself alive with the animal spirits of the marketplace…. This story, as Mr. Herman tells it, is worth a thousand economics textbooks…. Freedom's Forge is a story of the triumph of hard-headed American business and industry not only over the Axis powers but also over their lily-livered critics…. It is impossible to read his book and not think that, in times of economic hardship, heroic entrepreneurship, sometimes harnessed to government, will trump Washington's bloodless fiscal tinkering any day. It has been done before and can surely be done again." — Delves Broughton, The Wall Street Journal

"Herman tells the epic story of the American businessmen who, in only a few years, helped America become the largest military power in history. These include William Knudsen, a Danish immigrant who turned General Motors into ‘the largest industrial corporation in the world,’ and industrialist Henry Kaiser, the ‘master builder’ responsible for infrastructure projects throughout the country. In 1940, Roosevelt personally called upon Knudsen to oversee the assignment of contracts worth billions of dollars to produce the guns, tanks, planes, and other equipment needed for battle. Eschewing centralization in favor of free-market incentives, Knudsen directed the forging of ‘the arsenal of democracy,’ as factories around the nation converted to wartime production. Kaiser, meanwhile, presided over the creation of a new navy, America’s ‘Liberty ships,’ which Churchill called ‘the foundation of all our hopes.’ At times, the book falls into not-so-subtle hagiography of American capitalists, who are portrayed as selfless patriots who succeed despite the efforts of opportunistic labor organizations and big government New Dealers hostile to the free market. However, Herman has a knack for generating both suspense and patriotic self-congratulation. A cross between Ayn Rand, Herman Wouk, and the Wall Street Journal, the book is a compulsively readable tribute to ‘the miracle of mass production.’" — Publishers Weekly