From Dawn to Decadence 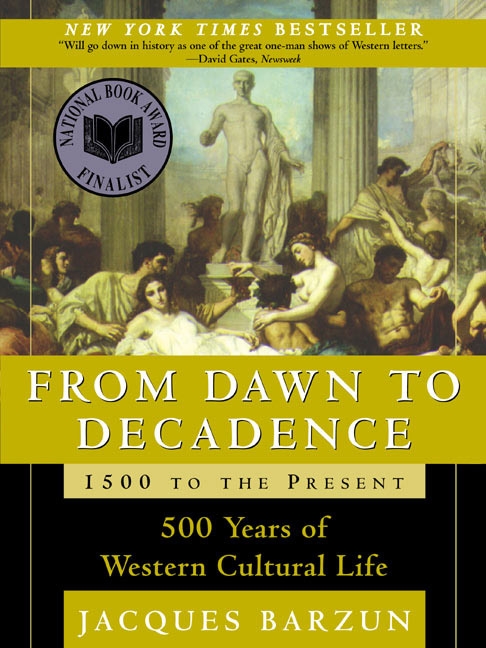 "Magisterial in its scope, judicious in its selection of evidence, FROM DAWN TO DECADENCE is a book that is easy to admire." — Atlanta Journal-Constitution

"If you're not used to sitting on the edge of your seat for 750 pages, saying 'Well, I'll be damned! every paragraph or so, you should go into training before FROM DAWN TO DECADENCE, Jacques Barzun's intensely engaging history of Western Culture since 1500.... He's the last of the polymath scholars.... FROM DAWN TO DECADENCE is his masterwork.... [It] will go down in history as one of the great one-man shows of Western letters, a triumph of maverick erudition like Johnson's dictionary or Burton's ANATOMY OF MELANCHOLY.... He always makes room for beguiling curiosity.... [W]ith lucid skepticism, the damndest story you'll ever read." — Newsweek

"His account is informed throughout by a love of language and its ability to communicate precise meaning....In this wry and often witty survey, Dr. Barzun does not merely provide an encyclopedic familiarity with details. He tells a story that conveys the drama of human encounter and reaffirms the shaping triumph of intelligence over the indifferent and chaotic movement of history." — Dallas Morning News

"A magnificent summa of [Barzun's] concerns as a thinker and historian.... [R]eading it is an exhilarating experience.... [A] rich tapestry of a book...It is a pleasure to find a historian who does justice to literary pleasure.... Barzun's book triumphs marvelously in its two main purposes...to exhibit the sheer richness of that cultural explosion we summarize in two words as 'the West'...[and] to delineate the evolution of that decadence his title announces." — The New Criterion

"[P]rofound, eloquent, often witty.... A book of enormous riches, it's sprinkled with provocations.... Barzun keeps up the momentum with scores of snappy profiles.... This is a book to be reckoned with." — Publishers Weekly (starred review)

"[A] prodigious work...scope and variety...boldness and urbane temper...feats of organization, and...sustained energy.... This book is beautifully constructed.... Mr. Barzun is also a master of the enlivening anecdote and detail.... What finally makes FROM DAWN TO DECADENCE so readable, and its handling of even familiar matters so fresh, is its civilized, conversational, witty jargon-eschewing tone of voice." — The Wall Street Journal

"This lively and opinionated survey of western culture marks the capstone of the noted scholar's career. Many academics can't be found in the pages they write. Barzun (former provost and professor at Columbia) is everywhere present in his. His seemingly limitless learning, wit, and always distinctive views shine in every paragraph of this, his first full-fledged trade publication since A STROLL WITH WILLIAM JAMES (1983). Few scholars combine erudition with such clarity and case of expression as he does; few wear their learning so lightly or write so purposefully for the general reader. Now 93, Barzun seems to have read and to know everything. Starting with Luther's revolution within the Catholic Christendom, Barzun describes, evaluates, and, yes, judges the events, people, and ideas that have composed the history of western Europe and its overseas transplants for a half-millennium. But this is no textbook; it sparkles and courses through time and places like water in a clean-running brook. Readers will gain new insight here into figures, movements, books, and ideas that are probably already familiar; they will also discover little-known individuals, works, and events. One of the book's distinctive features is Barzun's engaging method for encouraging his readers to deepen their knowledge. Rather than conventional footnotes or lists for further reading, he gives direct, parenthetical exhortations ('the book to read is...'). Also characteristically, he never minces words.... In addition to such bracing frankness, the book justifies its price simply by the wonderful quotations that stud the margins of its pages. Barzun is pessimistic about the West's future, but his gloomy views rarely cloud his judgement and do not, fortunately, permeate the text. In every way, this is a book to savor. An extraordinary achievement by one of the glittering minds of our time." — Kirkus Reviews (starred review)

"Others have written about the end of Western culture, but none with more cogent erudition than Barzun. With a poise borne of decades of distinguished scholarship, Barzun recounts the religious, political, artistic, and social revolutions that shaped Western culture. But far more than a chronicle of events, this magisterial history highlights the earliest emergence of seminal new ideas and impulses. Thus, though Barzun offers deft and often shrewd portrayals of such giants as Luther, Montesquieu, and Shaw, it is concepts--including individualism, emancipation, primitivism, and self-consciousness--that form the unifying threads running through the tapestry of the centuries. In scrutinizing the last few decades, Barzun sees the threads unraveling, and the weavers despairing. No new ideas inspire fresh or meaningful patterns. Signs of decadence abound. Absurdity pervades the arts. Empty slogans dominate politics. Violence replaces thought. Barzun expects and even invites disagreement. But he advances his views with an intellectual capaciousness that will win admiration even from those who reject his conclusions. An impressive culmination to a lifetime of serious reflection." — Booklist

"Now, making timelessness timely, Barzun presents his account of all the great works of the Western mind in the last five centuries. If FROM DAWN TO DECADENCE is not a Great Book itself, it is certainly a great achievement. Encyclopedic without being discontinuous, the book hardly seems as long, as carefully constructed, or as densely packed as it is. Though the ideas it explains are often complicated, the explanations it offers are limpidly clear, sparkling with biographical anecdote and counter-canonical observations, entirely free of those deserts of abstraction unrelieved by example often found in works of cultural theory. This is the American style, and Barzun owns it. Arriving from France as a teenager in the 1920's, he became one of the leading lights of an exceptional generation of immigrant intellectuals. Now 92 and retired from teaching, he is no less the 'veritable Pic,' as French students call those classmates who remind them of Pico della Mirandola — that young man of the Renaissance who knew everything.... FROM DAWN TO DECADENCE will find many readers waiting, because it has been 17 years since Barzun last published an old-fashioned cultural history. 'Cultural' means it includes technology, sex, and cuisine and both high and popular entertainments. 'Old-fashioned' means it relies on narrative, and instead of subscribing to a theory it deploys dozens of them. The book's form, a gallery of remarkable profiles...allows Barzun to display his extraordinary facility for finding unfamiliar facts about familiar characters and teasing the expectations of all levels of readers....It is both a virtuoso performance and an epitome of what will surely be seen as the books major weakness, a curmudgeonly view of the century of the common man. Despite his view that things in general are going downhill, Barzun is undiminished in his scholarship, research, and polymath interests.... Barzun can keep up to date and comment intelligently on almost anything human minds may light upon.... The superb range and clarity of Barzun's writing are also on display. His prose is fitting and never florid, full of lapidary judgments.... FROM DAWN TO DECADENCE, in short, is peerless." — The New York Times Book Review

"Jacques Barzun's brilliant reprise.... This new venture shows him working undauntedly into his nineties, and since the challenge was to cover old ground with a narrative that turned it into something fresh, it is fair to say that none of his passion for analysis has deserted him.... Illuminating...its narrative success rides on the detailed itinerary of the journey.... Most exceptionally...Barzun has always worked across the cultural board.... Unlike most historians, he has also written extensively on the nature of historical method. Not surprisingly, therefore, his performance here has a remarkable natural grace, as he negotiates his way in and around scientific developments, literary texts, musical forms and ideas. Recognizing no arbitrary boundaries between disciplines, he glides easily from on major topic or country to another.... What is more, he brings a sinewy and limpid prose to this ease, a keen eye for trends and historical configuration, and a delightfully ironic gloss. The result is history both as a work of art and of historical science... This is a work of long reflection, holding the distillation of a lifetime." — Times Literary Supplement