The Rivalry That Destroyed an Empire and Forged Our Age 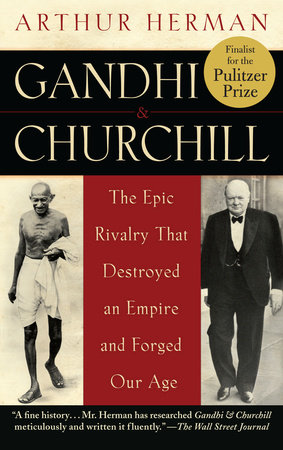 "An authoritative, deeply researched book that achieves an extraordinary balance in weighing two mighty protagonists against each other." — Judges of the 2009 Pulitzer Prize

"Veteran historian Herman offers an ambitious, reasoned joint biography of two great men. Each was a late-Victorian political figure who continued to lead into the mid-20th century. Each held an exemplary vision for his country that initially and spectacularly prevailed, but ultimately collided with new modern realities. Born to a well-to-do Hindu family in the western province of Gujarati, Mohandas Gandhi (1869–1948) was groomed in the English educational system to be a barrister and spent a formative period studying in London. His first experience of racial discrimination was in South Africa, where he worked for the enfranchisement of indentured servants. Winston Churchill (1874–1965), son of an aristocrat who was briefly secretary of state for India, inherited his father Randolph’s unshakeable belief in Britain’s imperial mission to the subcontinent. While both Gandhi and Churchill had absorbed the idea of empire as “a moral force, an institution of order and civilization,” Gandhi’s view would change drastically. He gradually repudiated Britain for its criminal subjugation and tyranny, fashioning a new spiritual creed from his deep philosophical readings, during his many jail stints, of Tolstoy, Ruskin and the Bhagavad Gita. Churchill rejected Gandhi’s brand of religious “fanaticism,” which he believed threatened to engulf the civilized Christian world in paganism and darkness. When Gandhi returned to India and joined national politics, he developed his belief in ahimsa (nonviolence) to embrace methods of satyagraha (passive resistance) in order to challenge the Raj’s paternalistic, restrictive policies. Churchill opposed him at every step, passionately rejecting, for example, Viceroy Lord Irwin’s advocacy of dominion status for India in 1929. Herman’s measured portrait of each man conveys his entire worldview, shaped by class, history and education. Each proved great and flawed in different ways. A well-wrought historical narrative that adds significantly to our understanding of both figures." — Kirkus Reviews

"The complex task of drawing comparison and contrast between two of the most chronicled lives of the 20th century is easily and compellingly handled by Herman. Spanning the globe and dozens of decades, Herman never sinks into the clichés of these two men's biographies but rather deconstructs some of the cherished myths surrounding them while maintaining a warm and lively tone. From India to South Africa to London, they seemed to cross paths in life yet could never reach a true understanding of each other. Churchill, the ardent defender of the British Empire, had trouble accepting modern political realities and fixated upon Gandhi as the ultimate threat to his beloved England's legacy. Gandhi, in turn, achieved global superstar status but could not unite Indian politics and eventually became a hindrance, then an irrelevance, to Indian independence. These two men may have been presented historically as enemies, or at least proxy enemies, but Herman brings out the true issues that divided them yet made them remarkably similar holdovers of the Victorian era. Highly recommended for public and academic libraries." — Elizabeth Morris, Library Journal (starred review)

"As one might expect from the author of To Rule the Waves, Mr. Herman has researched Gandhi & Churchill meticulously and written it fluently. He has also managed to triumph over a special narrative problem: Although the careers of his two subjects were intimately bound up with each other, their only actual meeting [took place briefly early in their lives]." — Andrew Roberts, The Wall Street Journal

"Herman has worked hard and his book contains much interesting matter, forcefully presented. Moreover, the subject itself is compelling…. This juxtaposition of these two extraordinary men makes for a fascinating story." — Paul Johnson, National Review

"People define the perfect summer book in a myriad of ways. Some adore trashy sex 'n' shoe shopping sagas or relationship-heavy romances. Others prefer mysteries with a mutilated cadaver stuffed into every chapter. Then there are readers who consider it ecstasy to nestle in with a doorstopper-sized history. Arthur Herman's Gandhi & Churchill is perfect for them. Like a rich vindaloo, it requires time to digest, but you leave the table satisfied. Libraries groan with excellent biographies of Churchill. And though in the past many Americans have known little about India, today the world's second most populous nation has seized the spotlight with its vibrant economy, influential culture and flourishing literature. The author of How the Scots Invented the Modern World Herman uses the two leaders' lives—Gandhi the nationalist, Churchill the imperialist—as twin anchors to examine the end of British rule in India. Most of the big conflicts of the 20th century are present in this book: the two World Wars (Britain was terrified that India would fall to Japan), religious division (India was partitioned in 1947 to create Pakistan because of Hindu-Muslim conflict), civil disobedience (which would deeply influence Martin Luther King Jr.), colonialism and revolution. The two men's personal stories frame the book. Churchill was determined to keep India the jewel of the British Empire, which pitted him against the Mahatma's 40-year struggle for independence. Gandhi & Churchill requires a commitment, but you finish the book knowing that you can evaluate the world today, particularly modern India, with more knowledge and insight." — Deirdre Donahue, USA Today

"There was a time not so long ago when Winston Churchill, England's World War II prime minister, was all but universally admired among English-speaking peoples—and not by them alone….Revisionism has set in, however. The best of the current revisionist books is Arthur Herman's Gandhi & Churchill, a worthy successor to his wonderfully readable How the Scots Invented the Modern World…. Herman's book focuses on two imposing figures who epitomized the clash between traditional imperialism and the gathering anti-colonial insurgency, and he tells their stories stylishly and eloquently…. He has probed beneath the stereotypes." — Edwin M. Yoder, Jr., Washington Post Book World