Bletchley Park, Colossus, and the Dawn of the Digital Age 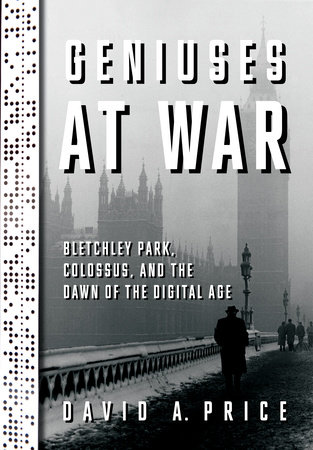 From the author of The Pixar Touch and Love and Hate in Jamestown comes the dramatic, untold story of the brilliant team who built the world’s first digital electronic computer at Bletchley Park, during a critical time in World War II.

Decoding the communication of the Nazi high command was imperative for the success of the Allied invasion of Normandy. The Nazi missives were encrypted by the Tunny cipher, a code that was orders of magnitude more difficult to crack than the infamous Enigma code. But Tommy Flowers, a maverick English working-class engineer, devised the ingenious, daring, and controversial plan to build a machine that could think at breathtaking speed and break the code in nearly real time. Together with the pioneering mathematician Max Newman and Enigma code-breaker Alan Turing, Flowers and his team produced–against the odds, the clock, and a resistant leadership–Colossus, the world’s first digital electronic computer, the machine that would help bring the war to an end.

With fascinating detail and illuminating insight, David A. Price’s Geniuses at War tells, for the first time, the mesmerizing story of the great minds behind Colossus, and chronicles their remarkable feats of engineering genius that ushered in the dawn of the digital age.

Winner of the 2022 IEEE William and Joyce Middleton Electrical Engineering History Award, for a book in the history of technology "that both exemplifies exceptional scholarship and reaches beyond academic communities toward a broad public audience."
“Best Nonfiction Book of the Year”—Kirkus Reviews

"Price puts his expertise in history and technology to excellent use in his latest book. Following the exploits of the motley collection of geniuses installed at Bletchley Park during the Second World War, he weaves a superb narrative, at once compelling and relatable, about the technological innovations used to break the Nazis’ many military and police codes and ciphers. In this book, the code breakers come to life as people grappling with personal conflicts and politics while working together (and sometimes against each other) in the relatively egalitarian environment at Bletchley. Many of the group’s innovations receive notice in Price’s work, but he focuses mainly on the events and people involved in the invention of Colossus—the first programmable, electronic, digital computer, which was designed to break the German army’s Lorenz cipher. Readers will encounter familiar names, such as Winston Churchill, along with less prominent figures, like the British mathematician Max Newman. VERDICT: Incredibly well-written and well-researched, this fast-paced book reads like a novel. Highly recommended to readers with an interest in World War II and 20th-century history, as well as anyone looking for an exciting story of code breaking and intrigue." — Crystal Goldman, Library Journal (starred review)  (Read the full review)

"A fresh account of ‘the greatest decryption achievements of World War II and the launch of the digital age.’ The satisfying revelations about Allied code-breaking have produced numerous books, but it’s a field with an endless supply of intriguing material. Historical accounts of Bletchley Park emphasize the iconic Enigma machine, which enciphered messages from Germany’s military. In fact, Britain’s massive code-breaking dealt with many traditional codes from Germany, Italy, and Japan as well as other machines. In this page-turning study, Price focuses on a particularly difficult project called ‘Tunny.’ Deployed by Germany in 1942, it used a machine vastly more complex than Enigma to send high-level messages between Berlin and army commands throughout Europe. By 1943, Bletchley had cracked its code, but decrypting a single message took days using the latest calculators, which were mechanical. It was then that Price’s titular geniuses went to work. Recruited by Alan Turing, then a relatively unknown mathematics professor, Max Newman devised a new kind of machine. He worked on it with electrical engineer Tommy Flowers, another Turing protégé, who proposed using electronics, an idea greeted with skepticism because it required vacuum tubes, which were considered unreliable. Despite a lack of enthusiasm, work began, and Price delivers a fascinating account of the problems Flowers and his team overcame before the massive machine called Colossus arrived in January 1944. The first electronic digital computer, it flabbergasted observers by churning out decryptions 500 times faster than before. Soon Bletchley was reading Hitler’s mail. Before the Normandy landings, Allied leaders knew that their deceptions had convinced Hitler that the invasion would occur elsewhere. After victory, all the Colossus machines were destroyed, and their designers returned to civilian life, sworn to secrecy. When the story became public in the 1970s, a few modest honors came their way but not the fame they deserved. Price’s account is unlikely to change this, but he tells a terrific story. An entertaining history of brilliant minds at work against the Nazi behemoth." — Kirkus Reviews (starred review)  (Read the full review)

"There have been many books written about Bletchley Park, code breaking and the birth of computers. Geniuses at War by David A. Price is a fresh take and an excellent overview if you are new to the topic or just need a refresher. Starting with the creation of Britain’s intelligence service, Price relates the onset of the Second World War and the requirement of establishing Bletchley Park as a separate location for secret government work. In order to decode the communications of the Nazi high command it was necessary to enlist the aid of intellectuals and academics with backgrounds in history, culture, and languages. However, it was the addition of mathematicians like Alan Turing that made ground breaking work possible. Turing’s success in solving the Enigma codes stimulated the team to grow to include mathematician Max Newman and electrical engineer Tommy Flowers. These dauntless individuals and many other top-secret employees at Bletchley Park produced Colossus, the world’s first programmable digital electronic computer. This account of their challenges and race against time reads like a thrilling suspense novel. It is perfect reading for a cold winter day." — The Waterloo (Canada) Record  (Read the full review)

"Colossus, the first digital, electronic computer, was developed by British intelligence during the Second World War, to decipher encrypted messages between Hitler and his generals. This history places the famous achievements of the computer scientist Alan Turing alongside the work of his mentor Max Newman and of Tommy Flowers, the engineer who designed the machine. Price describes the complexity of the codes produced by Germany’s cipher machines and recounts Colossus’s triumph in obtaining military intelligence before the Normandy landings. Noting that Colossus marked the beginning of the digital age, Price observes that it was the product 'not of impersonal forces but of the joining of extraordinary individuals within an extraordinary institution.'" — The New Yorker  (Read the full review)

"In Geniuses at War, David A. Price convincingly recounts a heroic and tragic tale.... Price gives us a narrative worthy of James Bond (whose creator, Ian Fleming, worked for Britain’s Naval Intelligence Division coming up with plots to lure German U-boats to their destruction). There is a grand buildup of tension and the race against time to get the code cracked. And there is the team’s pride when then-Prime Minister Winston Churchill visits Bletchley, finds Turing sitting on the floor surrounded by papers, and realizes how brilliant the team is." — Janine di Giovanni, Foreign Policy  (Read the full review)

"David A. Price, tells the story of amazing men who invested their time and talents and developed a machine to help them decode the codes used by the Germans in World War II. Prior to this, many people worked many hours and days to decode the intercepted German messages, but as the planning for the Normandy invasion neared, Britain made decoding the Nazi communications a top priority. Alan Turing brought in many talented people to work on this project, including Tommy Flowers. Flowers devised a plan to develop a machine to break the code in nearly record time. Colossus, the world’s first digital electronic computer, was developed and helped bring about an Allied Victory. David A. Price used recently declassified sources to bring this incredible story to print. Considering that most of us today casually use computers, smart phones and the like on a daily basis, learning about the amazing unfolding of the digital age makes for a gripping and wonderful read." — Joan Steinberg, The Portland Press Herald  (Read the full review)

"Price delivers a solid history of how Allied code-breakers at Bletchley Park developed ‘the first operational digital computers’ to defeat Germany’s vaunted Lorenz SZ cipher machines. Crediting Bletchley Park’s successes to a ‘strain of meritocracy [that] existed, even if only on the margins, within a powerful system of social class,’ Price notes that the British signals intelligence agency initially thought the ‘right type of recruit[s]’ for cryptography were academics who had experience with art history, law, German, and the classics. However, it was mathematician Alan Turing who cracked the Enigma codes, and mathematician Max Newman and telephone engineer Tommy Flowers (a self-taught specialist in ‘large-scale digital electronics’) who designed and built Colossus, a programmable computer that allowed British code-breakers ‘to read the Third Reich’s highest-level military communications system, including messages from Hitler himself.’ Price briskly relates the technical aspects of the story and includes plenty of gossip and droll anecdotes, noting, for instance, that the Germans refused to believe the British had broken the Enigma codes because they were so bad at encrypting their own messages.... Those looking for an entertaining introduction to Bletchley Park and the era’s technological innovations would do well to start here." — Publishers Weekly