How Surges of Migration Transformed America and Its Politics 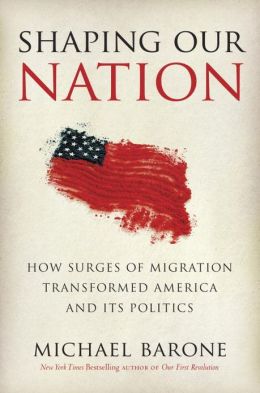 From the time of the American Revolution, the United States has grown from a confederation of colonies of 3 million people to a transcontinental nation of 303 million. There has been nothing comparable to this in the rest of the world. We are accustomed to taking America’s growth for granted and to suppose that it was a slow, steady process. But examination of the data shows that America did not grow slowly and steadily, but rather that it has been peopled by several sudden surges of migration, in which very large numbers of immigrants have chosen to move to America or in which large masses of Americans have decided to move to other parts of the country.

No one predicted the beginnings or ends of these surges. Economic incentives to migrate to America and within America have always existed since the colonial era; the United States has furnished greater economic opportunities than any other nation, and some parts of the country have always had higher wage levels than others. But while migrations have been responsive to economic conditions, and levels of migration have fluctuated in line with the movement of business cycles, something more has motivated these surges of migration—a desire to spread a way of life across the continent, a desire to escape from a disfavored position in a foreign country or in the American civic order, a desire to seek latitude for freedom of speech or the free exercise of religion. Michael Barone is writing the first book to examine all the demographically significant surges of migration, internal as well as immigrant, showing how they have, together and separately, shaped the America we live in today—a nation with 5 percent of the world's population that produces 25 percent of its economic product and deploys more than 50 percent of its military capacity, a nation in which only 1 percent of its current population claims ancestry from the peoples called American Indians or Native Americans.  The United States is by definition the cumulative product of successive migrations, first from across the oceans and then also within the nation itself.  This book tells the story of how surges of migration of great magnitude shaped and reshaped America.

"Few commentators have studied the history of American politics as thoroughly as Barone, and he continues his life project here with a look at our constantly churning population, mass movements that have had a continuing effect on our politics. Picking up about where David Hackett Fischer's estimable Albion’s Seed (1989) left off, Barone looks first at the antebellum spread of the Scots-Irish from the Eastern Seaboard to the Southeast and Southwest. He turns then to four other epochal surges: the first half of the 19th-century migration of New Englanders across upstate New York and the Midwest and of planter-class Southerners from the coast to the Mississippi Valley; the 1840-1890s immigrations of Irish Catholics and German Protestants; the mass movement from rural to urban America from the end of the Civil War to World War II; and the 1970-2010 immigration of Latin Americans and Asians to major American cities. Within these larger transformations, Barone pursues a variety of intriguing subplots—Andrew Jackson as the perfect embodiment of the American Scots-Irish, the unique, 'annealing effect' of WWII, the role of air conditioning in repopulating the South, and the recent exodus from high- to low-tax states—and he emphasizes two recurring themes: the unanticipated beginnings and the rather abrupt endings of these mass migrations and the widespread unease, even fear, each development engendered. How could the republic possibly absorb these changes? Barone ably demonstrates how practiced the United States has become, how sturdy our constitutional framework has proven, at accommodating the religious, economic and cultural diversities that accompany vast, unexpected additions to and shifts within our population. As Congress once again debates immigration reform, Barone delivers a timely history lesson." — Kirkus Reviews

"Barone reviews migration to the U.S. and its impact on American politics. In the 18th and 19th centuries, Scotch-Irish and English pioneers fanned across the continent in a “Yankeediaspora” and bestowed on it British laws, language, and religions. Barone catalogues the impact of European immigrants, from Italians to Slavs, Germans and Irish. In contrast to the rest of the nation after the Civil War, black and white Southerners remained relatively immobile and the region was populated mostly by native-born Americans. While Barone transcends clichéd Ellis Island narratives, his early chapters rehash textbook political history to a degree. The more impressive chapters deal with the post-1940 period, as Barone outlines black migration to the North and out-migration from Northern cities to the Sunbelt. The flow of Americans of all backgrounds to California, Florida, Texas, and other high-growth states added up to a national political game changer. Barone puts the best face possible on 50 years of substantial, mostly illegal Mexican immigration to the U.S. and explains why it happened. He reveals official cluelessness—or dishonesty—during the passage of the landmark immigration acts of 1964 and 1965. Barone’s sharp political instincts and ability to clearly explain demographic change make for a solid and lively account." — Publishers Weekly