How Not to Get Rich

The Financial Misadventures of Mark Twain 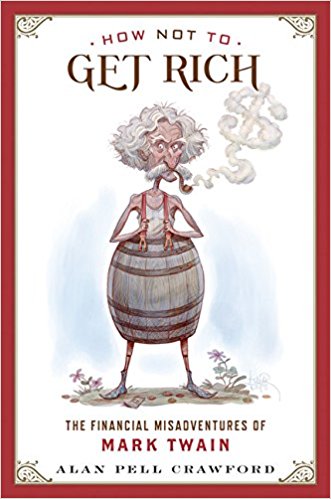 Alan Pell Crawford tells an uproarious tale of Mark Twain’s endless attempts to get rich, all of which served only to empty his pockets.

Mark Twain’s lifetime spans America’s era of greatest economic growth. And Twain was an active, even giddy, participant in all the great booms and busts of his time, launching himself into one harebrained get-rich scheme after another. But far from striking it rich, the man who coined the term “Gilded Age” failed with comical regularity to join the ranks of plutocrats who made this period in America notorious for its wealth and excess.

"Excerpted in The Paris Review" —  (Read the full review)

"A new book by Alan Pell Crawford, How Not to Get Rich: The Financial Misadventures of Mark Twain, makes an object lesson of Twain’s pecuniary gullibility. It places Twain amid the mania of the later nineteenth century, when surging industry existed alongside literal flashes in the pan, life-altering inventions alongside mere novelties. As Crawford writes, ‘The tantalizing prospect of great wealth bedeviled Mark Twain for much of his life.’" — Dan Piepenbring, The New Yorker  (Read the full review)

"Crawford offers up a zesty financial biography of Twain the businessman, noting that his subject tried to be ‘an Edison as well as a Shakespeare,’ as one of his great nephews recalled. The author chronicles Twain’s adventures as an entrepreneur, investor, and inventor; like a diligent accountant, he carefully itemizes Twain’s wins and losses in today’s monetary values, making them all the more shocking. When Twain went to Carson City, Nevada, as a novice writer, he also had a hankering for a quick buck. After all, he believed the mountains were ‘literally bursting with gold and silver.’ Though the mining didn’t pan out, as a ‘resourceful and ingenious’ fellow, he had ‘cause for hope.’ He struck pay dirt when he married Livy Langdon, whom he deeply loved. The young bride’s wealthy father built them a huge, furnished, fully staffed house as a wedding gift; when her father died, Livy inherited more than $4,400,000. After they moved to New Haven, Connecticut, in 1872, to another formidable house, Twain wrote The Adventures of Tom Sawyer and invented the Self-Pasting Scrap Book. It sold well, but his partner swindled him, and he went on to invest in other projects: odorless rubber cloth, a vaporizer to extract steam from coal, a Fact and Date board game, and the Kaolotype engraving process to create book illustrations. Twain then started his own publishing company, and after giving Ulysses S. Grant’s widow an unheard-of royalty, he published her husband’s Memoirs. It sold like hot cakes, and she made $11,000,000. However, his company’s other major book, The Life of Pope Leo XIII, was a flop. Fortunately, Twain was a ‘superb manager of his own image,’ a talent that kept his family fed. Light and frothy, this humorous biography is a lively read." — Kirkus Reviews

"Comic vignette[s] enliven Alan Pell Crawford’s How Not to Get Rich a short book that focuses on Twain’s wayward financial life. There is a notion that it is undignified for a writer to lust after money. Twain, as Mr. Crawford makes clear, did not hold to it…. ‘Writing books was just a means to an end.’ This judgment amounts to a large reappraisal for the titan of 19th-century American letters, especially since his financial flops have been written about before. Yet by banishing all else to the sidelines, Mr. Crawford casts them in a powerful light. He builds a plausible case that the onetime riverboat pilot’s true ambition was not literary but, rather, ‘to make money and then make even more money.’" — Roger Lowenstein, The Wall Street Journal

"In his delightful, yet often poignant book, Alan Pell Crawford reveals of a side of Mark Twain that few of us know, not the supremely confident raconteur who became an international celebrity, but the striver desperate to become a millionaire at any cost. While conjuring his literary classics, Twain threw away a fortune on doomed financial schemes involving everything from silver mines to board games to seemingly innovative typesetting machines. It’s a timeless American tale about genius, ambition, and the inability to know one’s self." — Devin Leonard, Bloomberg BusinessWeek, and author of Neither Snow Nor Rain

"Any fool can tell you how to make a fortune. But it takes a special kind of genius to teach you how to amass a fortune and then go broke, and to do it all with such phenomenal style and while remaining eternally optimistic. Mark Twain’s rags-to-riches-to-rags-to-riches tale is one of the great untold stories in American history. Alan Pell Crawford captures the energy, humor, and wide-eyed hope of America’s first ‘angel investor’ with wit and verve, in a book that is worthy of Twain himself." — Dan Lyons, author of the New York Times Bestseller Disrupted: My Misadventure in the Start-Up Bubble

"In this fast-paced and very funny book, Mark Twain comes across like your friend who launches one startup and one Kickstarter after another. Every couple of pages you sense the bottom about to fall out again, and you brace yourself for another spectacular blowup. Only Mark Twain—and Alan Pell Crawford—could make you laugh so much at financial disaster." — Catherine Baab-Muguira, The Motley Fool

"In his fiction, Mark Twain could get a kid to trade valued marbles in exchange for whitewashing a fence. But in his life, Twain was generally the one being snookered. Alan Pell Crawford shares the wit of the man who even made going broke funny." — Brian O'Neill, author of The Paris of Appalachia and columnist for the Pittsburgh Post-Gazette

"I had no idea that Twain led such an exciting economic life. This book, which is rich with personal finance lessons, is entertaining and presents a new way to examine Twain's historic life through his many and varied economic adventures!" — Eric Tyson, Best-selling author of Personal Finance for Dummies and Investing for Dummies

"Finally, a business book for the financially illiterate and idiotic! Nobody, no matter how blockheaded when it comes to money, can read this book about Mark Twain’s hilariously inept and inevitably catastrophic attempts to get rich and not feel like Bill Gates or Elon Musk by comparison. From a bumbling attempt to corner the world cocaine market (I can just imagine El Chapo reading this book in the prison library, shaking his head in wonderment) to publishing a $12,000, gold-plated edition of Ulysses S. Grant’s autobiography (I can just see Donald Trump in the Oval Office, shaking his head in enthusiasm), Alan Crawford’s account of Twain's business fiascos is a marvelous chronicle of economic imprudence and imbecility. I can hardly wait for the gold-plated edition!" — Glenn Garvin, columnist, Miami Herald