How America's Political Parties Change (and How They Don't) 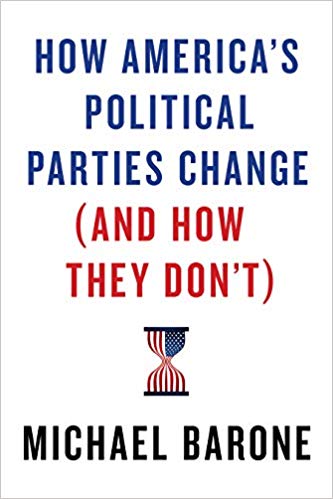 The election of 2016 prompted journalists and political scientists to write obituaries for the Republican Party—or prophecies of a new dominance. But it was all rather familiar. Whenever one of our two great parties has a setback, we’ve heard: “This is the end of the Democratic Party,” or, “The Republican Party is going out of existence.” Yet both survive, and thrive.

We have the oldest and third oldest political parties in the world:  the Democratic Party founded in 1832 to reelect Andrew Jackson and the Republican Party founded in 1854 to oppose slavery in the territories. They are older than almost every American business, most American colleges, and many American churches. Both have seemed to face extinction in the past, and have rebounded to be competitive again. How have they managed it?

Michael Barone, longtime co-author of The Almanac of American Politics, brings a deep understanding of our electoral history to the question and finds a compelling answer. He illuminates how both parties have adapted, swiftly or haltingly, to shifting opinion and emerging issues, to economic change and cultural currents, to demographic flux. At the same time, each has maintained a constant character. The Republican Party appeals to “typical Americans” as understood at a given time, and the Democratic Party represents a coalition of “out-groups.” They are the yin and yang of American political life, together providing vehicles for expressing most citizens’ views in a nation that has always been culturally, religiously, economically, and ethnically diverse.

The election that put Donald Trump in the White House may have appeared to signal a dramatic realignment, but in fact it involved less change in political allegiances than many before, and it does not portend doom for either party. How America’s Political Parties Change (and How They Don’t) astutely explains why these two oft-scorned institutions have been so resilient.

"Barone’s book is a fascinating brief history of the two parties and their fortunes, and a reminder that today’s apparent trend-lines are not forever." — Richard Baehr, American Thinker

"Are the Republicans or Democrats or both headed for fragmentation or oblivion, and the American political system therefore destined for disruption or even chaos? In his lucid, concise, and deeply informative new book, How America’s Political Parties Change (And How They Don’t), Michael Barone provides the basis for a clear answer to those questions: No. As a leading authority on American politics and political history, the coauthor of an indispensable guide to the subject, The Almanac of American Politics, and the author as well of several well-received books about American history and politics, Barone knows whereof he speaks." — Michael Mandelbaum, The American Interest

"Incisively chronicles both parties’ victories and defeats over the past century and a half. From the end of the 19th century to roughly the 1950s, the electorate tended to reward one party or the other with both Congressional majorities and the presidency; after World War II voters tended to prefer divided government; and since 1994 we’ve reverted to a state of 'partisan polarized parity.' As in the 1880s, Americans’ voting preferences are now highly predictable and evenly matched. Mr. Barone’s superb analysis leaves me with a question: Why do presidential candidates insist on proposing radical economic plans that, in an era of partisan parity, have absolutely no chance of passing? Whatever the answer, be grateful for partisanship." — Barton Swaim, The Wall Street Journal  (Read the full review)

"Barone draws on his decades of analysis of the American political scene, his nearly bottomless well of granular knowledge of American political geography, and the more detailed analyses laid out in his multiple previous books. The result is a long-term narrative portrait of our two major parties, now both over 150 years old." — Dan McLaughlin, National Review