The Strategies of Evil 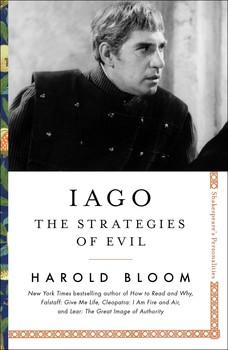 Iago: The Strategies of Evil is the fourth in a sequence of five brief volumes, “Shakespeare’s Personalities.”  The first was Falstaff: Give Me Life, April 2017, and the others are Cleopatra: I Am Fire and Air, October 2017, Lear: The Great Image of Authority, April 2018, and Macbeth: A Dagger of the Mind, April 2019.

From one of the greatest Shakespeare scholars of our time, Harold Bloom presents Othello’s Iago, perhaps the Bard’s most compelling villain—the fourth in a series of five short books about the great playwright’s most significant personalities.

In all of literature, few antagonists have displayed the ruthless cunning and unscrupulous deceit of Iago, the antagonist to Othello. Often described as Machiavellian, Iago is a fascinating psychological specimen: at once a shrewd expert of the human mind and yet, himself a deeply troubled man.

One of Shakespeare’s most provocative and culturally relevant plays, Othello is widely studied for its complex and enduring themes of race and racism, love, trust, betrayal, and repentance. It remains widely performed across professional and community theatre alike and has been the source for many film and literary adaptations. Now award-winning writer and beloved professor Harold Bloom investigates Iago’s motives and unthinkable actions with razor-sharp insight, agility, and compassion. Why and how does Iago uses fake news to destroy Othello and several other characters in his path? What can Othello tell us about racism?

Bloom is mesmerizing in the classroom, treating Shakespeare’s characters like people he has known all his life. He delivers that kind of exhilarating intimacy and clarity in these pages, writing about his shifting understanding—over the course of his own lifetime—of this endlessly compelling figure, so that Iago also becomes an extraordinarily moving argument for literature as a path to and a measure of our humanity. This is a provocative study for our time.

"There are few readers more astute than Bloom, as is proven once more in this perceptive study of Othello. The fourth entry in a series devoted to ‘Shakespeare’s Personalities’ finds Bloom wrestling with Iago, ‘a pyromaniac who wishes to set fire to everything and everyone.’ Consisting of lengthy quotations from the play interspersed with Bloom’s reactions, the book evokes the experience of reading Shakespeare’s text along with Bloom. He pays close attention to the rhythms of Shakespeare’s language, occasionally takes issue with other critics (‘W.H. Auden considered Iago to be the apotheosis of the practical joker. I do not find that helpful’), and augments his reading with recollections of past performances of the play (especially a 1964 version staged in London, with Laurence Olivier as Othello and Frank Finlay as Iago, who, Bloom recalls, acted Olivier ‘quite off the stage’). The true value of Bloom’s sensitive reading lies in his ability to articulate his emotional response to the play. He leaves readers with a memorable new perspective on Othello, concluding with the observation that none of Shakespeare’s other plays is as disturbing, not even the ‘apocalyptic’ King Lear and Macbeth, thanks to the ‘infernal intelligence’ manifested in the character of Iago." — Publishers Weekly