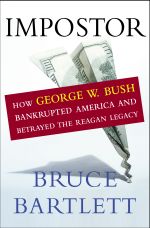 Though widely viewed as an arch conservative in the major media, Bruce Bartlett increasingly finds himself alienated from the president of his party. Bush's policies, he warns, have been anything but conservative.

Bartlett faults Bush for moving away from free trade, adopting Keynesian economic theories, increasing government regulation and doing an extremely poor job of developing and selling conservative initiatives, such as Social Security reform. As such, George W. Bush, he says, has been a disaster for conservatism. Criticism of Bush from the right has largely been confined to fringe elements outside the mainstream of the conservative movement. Bartlett is the first from within the conservative mainstream to make the case that Bush is not "one of us" and does not deserve conservatives' support. As the next presidential election looms, Bartlett warns, a new standard bearer must be found who will correct the many errors of this administration and get America's fiscal house in order.

After September 11, America declared war on Islamic militancy that required huge new expenditures on defense. In the face of this, it was folly, says Bartlett, to introduce the Medicare drug benefit, a middle class entitlement program that, according to its own actuaries, burdens the American taxpayer with a new $18.2 trillion debt, an amount much larger even than the (once-) dreaded Social Security crisis. To pay for this vast new expansion of the welfare state, Bartlett warns, taxes can only go up—way up. Getting sufficient revenue out of our current tax system will be futile, making something like a European-style value added tax a near-certainty. It is noteworthy that Governor Bush once appointed a Texas tax reform commission that recommended a VAT, which he then supported.

On top of the Medicare drug benefit, Bush has rammed through huge expansions of federal education and agriculture programs. He has done nothing to restrain Congress's pork barrel spending and is the first president since James Garfield not to veto a single bill.

The administration's massive increases in government spending, Bartlett says, makes a sharp increase in taxes inevitable. There are many reasons to believe that a financial crisis may be brewing as a result. The Federal Reserve, for instance, is raising interest rates, which will put pressure on the stock and bond markets, and eventually prick the housing bubble, just as Fed tightening ultimately popped the stock market bubble of the late 1990's. When this happens, Washington policymakers who have been ignoring the budget deficit for years will suddenly see deficit reduction as the only way of restoring confidence. At this point, Bush will have to reverse course on taxes and spending.

A National Review Best Book of the Year

"Author of REAGANOMICS and member of the Reagan and George H. W. Bush administrations, economist Bartlett charges that President George W. Bush has eschewed long-term conservative economic principles for short-term political gains and has consequently damaged both the conservative cause and the national economy. Bartlett cites Bush signing into law the 2003 Medicare prescription drug plan with its trillions of dollars of unfunded future costs as a fiscally disastrous action. Bartlett also criticizes Bush on other economic issues such as trade policy, tax reform, pork barrel spending, and the unfunded costs of the war in Iraq and hurricane Katrina. He also condemns Bush's approach to policy formation for focusing on political outcomes and listening to only a narrow circle of advisors. Bartlett concludes that Bush's legacy of unfunded spending will result in massive tax increases. With this prediction in mind, he gives an enlightening explanation of the economic impact of possible future taxes such as flat income and national sales. Bartlett has the conservative credentials to make his forceful accusations very compelling and worthy of purchase by public and academic libraries alike." — Library Journal